Teddy Atlas says Canelo Alvarez and his management will call out Artur Beterbiev to set up a fight with the unbeaten IBF/WBC light heavyweight champion within weeks or months. Canelo vs. Beterbiev will be a massive fight if it happens now.

The reason why it’ll be such a huge fight is that many boxing fans will see Canelo as the underdog for a change. Fans haven’t seen Canelo in a 50-50 fight since his fight with Gennady Golovkin in 2019.

Like a predator, Canelo and his management have spotted a vulnerability in Beterbiev, and they’re going to want to swoop on him now.

When Beterbiev was fighting on a higher level, Canelo’s manager Eddy Reynoso showed no interest in setting up a fight with him.

Don’t be surprised if Canelo announces to fight Beterbiev rather than WBC cruiserweight champion Ilunga Makabu.

Atlas thinks that Canelo’s management saw the age-related weakness in the 36-year-old Beterbiev’s game in his last title defense this month against Marcus Browne on December 17th.

They now believe Beterbiev (17-0, 17 KOs) is beatable, just as they waited until Gennadiy Golovkin began to show vulnerability before fighting him.

Like a gunslinger that is beginning to lose speed on the draw, the two-time Olympic gold medalist Beterbiev is starting to slow, says Atlas. Although Beterbiev’s power is just as good as ever, and his boxing brain is still operating at 100%, but his reflexes aren’t the same.

If Canelo is going to fight Beterbiev, he’ll need to do it soon to receive credit from the fans. After Beterbiev’s last two performances against Browne and Adam Deines, top 175-pounders like Joshua Buatsi, Gilberto ‘Zurdo’ Ramirez, and Anthony Yarde are going to want to fight him.

Beterbiev is turning 37 on January 21st. He appears to have lost some of his hand speed and ability to pull the trigger on his punches in the last two years since his knockout victory over WBC 175-lb champion Oleksandr Gvozdyk in October 2019.

“I’m going to make a prediction where something is going to happen because of this fight,” said Atlas on The Fight with Teddy Atlas in talking about Canelo Alvarez on who he’ll face next in May.

“Canelo’s people are going to do the same thing they did a few years ago when people wanted him to fight GGG, and he wasn’t ready to fight him next, and he knew it, and his people knew it. So they waited.

“Then one day, they surprised people and said, ‘We’re ready .’ Do you know why? They watched GGG against Daniel Jacobs, and it looked like there was some slippage. It looked like a little slippage, and they said, ‘There it is. It’s time to pounce. It’s time to make this fight.’

Canelo will need to change his plans on moving up to cruiserweight to face the weakest link in WBC champion Ilunga Makabu if he wants to meet Beterbiev next.

With Canelo, he seems to be under the mistaken illusion right now, believing that by collecting titles against ANY champion, no matter how flawed, weak and obscure, that future generations of ultra-hardcore boxing fans will look at his record and be impressed when they learn that he captured world titles in five divisions.

Suppose Canelo wants to impress this generation of casual and hardcore boxing fans. In that case, he needs to set up a fight with Beterbiev NOW, not later when the Russian fighter is in his 40s, looking shot to pieces the way Sergey Kovalev did when Alvarez fought him.

“I think Canelo’s people saw the same thing that they think they did against [Marcus] Browne that the great gunslinger [IBF/WBC light heavyweight champion Artur Beterbiev],” said Atlas. 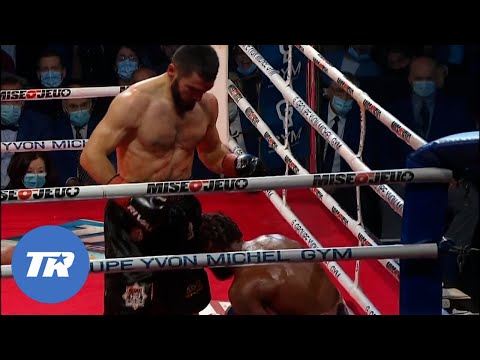 “It’s like the great gunslingers where all of a sudden they’re a little slow on the draw where there are spots there where Beterbiev looked like he didn’t pull the trigger.

“But then he did later, but it looked like he didn’t pull the trigger early on,” said Atlas on Beterbiev, struggling at times against his WBC mandatory Marcus Browne on December 17th in their fight in Montreal, Canada.

“Maybe we saw it; maybe we didn’t see it. I don’t know. He’s 36-years-old, and it’s going to happen sooner or later where that gunslinger [Beterbiev] is a little slow on the draw where Billy the Kid comes into town, and you know the rest.

“They’re going to need time to build that, it’s going to be a huge fight, but I just feel like don’t be shocked if you hear that for the reasons I just said [Beterbiev getting old],” said Atlas.

Beterbiev looked slow on the trigger in the first couple of rounds against Marcus Browne. It wasn’t until things got desperate for him after he was cut that he finally turned on the gas.

“I just hope they don’t wait like they [Mayweather and Pacquiao] waited,” said Atlas on not wanting Canelo to until Beterbiev is too old.

“The fans, I think they’re going to agree with what I’m about to say. Don’t wait as long as the Mayweather and Pacquiao waited for that fight [Canelo vs. Beterbiev].

“They [Team Canelo] waited the right amount of time where they were the ones in the driver’s seat where they’re the golden goose in boxing. They bring the money; they bring the fans, the numbers, the pay-per-view to a certain extent.

“So, they [Team Canelo] knew they had that power to make that guy [Golovkin] wait a little, and they have that power again [for a fight with Beterbiev]. They’re the ones that bring the money; they’re the golden goose.

“But I just hope they don’t wait too long [for Beterbiev to get older]. Everybody is talking about seeing [Errol] Spence and [Terence] Crawford. We’re not going to see it yet. Not yet. Instead, you’re going to see Spence and [Yordenis] Ugas.

“But I think people would love to see this fight, Canelo and Beterbiev, and if they don’t wait too long. I think it’s coming now; it’s coming.

“I think we might get it,” said Atlas on Canelo about to finally face Beterbiev three years after capturing the WBO 175-lb belt in 2019 against an over-the-hill Sergey Kovalev.

Atlas is correct that the Canelo vs. Beterbiev fight needs to happen now while the Russian fighter still has something left in his gas tank. If it doesn’t happen, it means that Canelo still lacks the confidence needed to make the fight.

It wasn’t until Gennadiy Golovkin turned 36 that Canelo finally gave in and decided to fight him. Fans had been pushing Canelo to fight GGG since Kazakh was 32, but he waited four years before finally taking the fight.

Beterbiev is already 36, so Canelo will have to pull the trigger on this fight soon unless he wants to wait until after he’s been dethroned before facing him.