Canelo Alvarez says he will end his trilogy fight against Gennady Golovkin in a “sweet way” by knocking him out when they meet on September 17th at the T-Mobile Arena in Las Vegas.

The undisputed super-middleweight champion Canelo (57-2-2, 39 KOs) believes it’s good that boxing fans are split about who won his first two fights with Golovkin (42-1-1, 37 KOs), but this time around, he plans on leaving no doubts.

Canelo might be right with his prediction. The 40-year-old Golovkin looked very old & tired in his last fight in April against WBA 160-lb champion Ryota Murata and was fortunate not to have gotten stopped in that contest.

Murata had Golovkin hurt to the body but let him off the hook when an uppercut hurt him in the sixth. If that performance by Golovkin is indicative of the level he’ll be fighting at against Canelo; he will not last long on September 17th.

Golovkin’s past remarks over Canelo’s positive test for clenbuterol have rubbed the Mexican star the wrong way, and it doesn’t appear that he’s forgotten about it.

Failing to get the victories in his two fights with Canelo seems to have added Golovkin, as he’s rarely fought since the second contest.

When Golovkin has fought, it’s been against weak opposition that failed to attract attention or help his deteriorating popularity. During the same time, Golovkin began using a translator for his interviews, creating a barrier for the fans.

The smiling & joking from Golovkin that were part of his past interviews are now gone for the most part.

“I think now is not a Mexican style, now is different,” said Canelo Alvarez to SecondsOut, talking about how Gennadiy Golovkin used to call his fighting style ‘The Mexican style.’

“I think the Mexican style that he says is just to bring the Mexican fans for him. Everybody does it. They go in there with Mexican colors and hats and everything and sombreros, and I understand that. Mexican style is just different.

“In a close fight, you can see he wins, and other people can say I win. It’s a close fight, so it’s fine,” said Canelo about the difference in opinion about his first fight with Golovkin in 2017. “It’s good for boxing being in close fights. It’s perfect.

“That kind of people don’t give me credit,” Canelo said about some boxing fans believing he lost the second fight with GGG as well as the first. “I don’t care about those people. I just see my accomplishments really good.

“This fight is going to be different. I’m going to end this fight in a sweet way. I just want to win and beat him and be very satisfied. I don’t care what the people say. He’s one of the worst,” said Canelo about Golovkin. 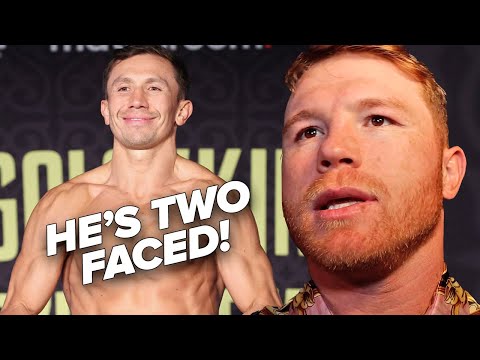