“Eddie Melo filled the Montreal Forum at 18 years old. His explosive power punching style made him on one of Canada’s most exciting fighters of our time”: boxing icon Spider Jones.

Eduardo Manuel de Melo grew up in the Little Portugal neighbourhood of West Toronto and turned pro in Montreal at age 17 years old after producing an impressive record as an amateur with 93 wins and four losses. He was Canadian middleweight champion in 1979 and quickly became a favourite of Montreal boxing fans.

The youthful Melo was often matched against much older and more experienced opponents, as is often the case, bad management was at the root of the problem.

Even so, he busted strongly out of the gate in 1978 and 1979 with twelve consecutive wins in a row, most via the knockout route.

Melo is best remembered for his trilogy of fights with Quebec boxing legend Fernand Marcotte (51-14-4 with 34 knockouts). The Quebec City native tuned pro in 1970 and had a virtually spotless record until he lost via ninth round TKO to Clyde Gray in 1973 for the Canadian welterweight title. Gray would later fight and lose to Jose Napoles for the word welterweight title. In 1978, Marcotte won the Canadian middleweight championship after dethroning Gerald Boucher.

The first of the Melo/Marcotte tussles took place October 31, 1978 when Marcotte dropped a 10-round split decision to Melo at the Verdun auditorium in Montreal. Melo was only eighteen years old at the time. That led to a shot at the title before a capacity audience of 15,000 rabid fans at the Montreal Forum. Melo lost by majority decision, with the scorecards as close as it gets. And the final bout was even tighter with a draw, that saw a grand total of exactly one round as the determining factor in the decision. It took place at the cavernous Olympic Stadium as part of the undercard for the historic Sugar Ray Leonard/Roberto Duran match.

One year or so later, the 21 year-old Melo was finally eligible to compete in Ontario.

In retrospect, 1980 and 1981 should have been banner years when Melo firmly established himself as a fighter with unlimited potential. Unfortunately, he was never able to put together a winning streak against quality opponents, with his worst showing being a 5th round TKO January 1981 in a title fight against the Middleweight champ Ralph Hollett (19-10-1).

Then, George Chuvalo entered the picture to promote the eagerly anticipated fight at CNE Coliseum on May 4, 1982 which would capture the rapt attention of every Toronto boxing fan. It pitted another hard-hitting homeboy Jimmie Gradson against Melo. For five years, both had been top draws on the Montreal boxing scene but their paths had never met. 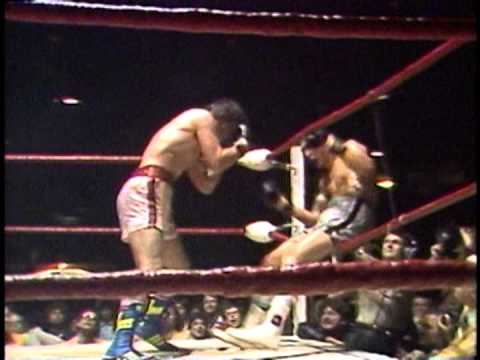 Both warriors had a common opponent in Gerald Bouchard with both notching decision wins. Both also went the distance against Gary Broughton. However, a closer examination of their records indicates that Gradson had a very distinct advantage. Gradson had beaten future Canadian middleweight champ Ralph Hollett (19-10-3) via decision right in Hollett’s home turf of Halifax, while Melo had lost twice to the Halifax native. More impressively, Gradson was coming off a win over tough-as-nails veteran Donato Paduano (43-10-2) who had once bested the legendary Luis Rodrigues (107-13-0), somebody who had given all-time great Emile Griffith all he could he could handle in three extremely close matches for the world welterweight title.

It turned into a battle of hate as each constantly bad-mouthed each other inside as well as outside the ring. The pace was incredible in the first three rounds and the 3,000 fans packing CNE Coliseum wondered how long either pugilist could last. Still, both gladiators were able to tap into hidden reservoirs of energy. The din was so deafening that it drowned out most of the venom coming from the rabid fans: split 50/50 between the home towners. By the eighth round, it wasn’t easy to tell who was losing with both men covered in sweat and fatigue, but still swinging away.

Early in the tenth round, Gradson 22, unleashed a sweeping left hook to Melo’s head that sent him crashing between the ring ropes, but as he struggled to get up he didn’t have time to regain his composure. A left and another right sent Melo once again crashing to the ring apron behind the ropes. He got up again, but the next flurry sent him crashing onto the laps of ringsides whereupon referee Harry Davis counted him out. “I’ve seen a lot of fights but never a war like this” said ringside Judge Jackie Silver, 74.

The only other noteworthy fight Melo would ever record had him besting a former Canadian light heavyweight champ via TKO in June 1983. Melo wanted to redeem himself after losing to Gary Summerhayes three years earlier. GS held his own in the ring in the first two rounds until Melo unloaded again and again in the seventh round when referee Ed Gaudet stopped the carnage. The fight would mark the swan song for Summerhayes (39-7-3), and two years later Melo also retired. He was only 25 years-old.

Melo’s final chapter was written in 2001, when at 40 years of age, he was murdered along with pal Johnny Pavao. They were the twin victims of a hired hitman.

On August 12, 2017 aboard the Empress cruise boat 400 people gathered on a $75 ticket, in support of the Eddie Melo Legacy Organization: dedicated to helping young amateur boxers and homicide victims’ families to remember the complicated, but much loved and respected Eddie Melo.

Nicknamed “Hurricane” for his non-stop aggressiveness, Eddie Melo is a true legend in Canadian boxing who notched up a very impressive record of 32-9-2 with 27 knockout victories. His memory is guaranteed to live on. 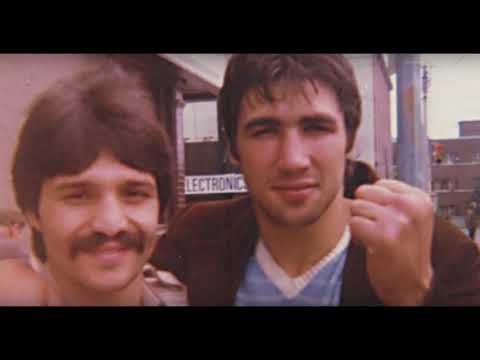