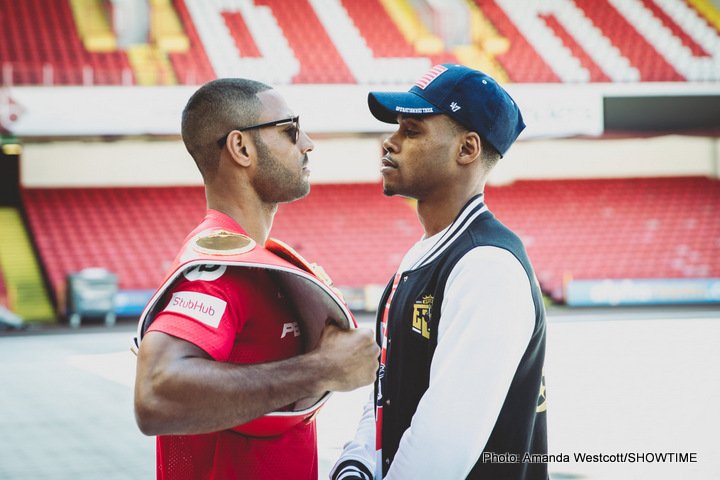 Errol Spence Jr. hasn’t been knocked in his 5-year pro career, but he could be getting knocked down this Saturday night according to IBF welterweight champion Kell Brook. He says the two of them could both get knocked down. However, he believes he’ll get up and be the one that gets the win in this fight.

This is just another day at the office for Brook, as far as he’s concerned. He’s not worried about losing to Spence. Brook’s theory is he’ll gain energy from his fans at Bramall Lane on Saturday night and they’ll carry him to victory. The crowd can only help a fighter so much. If the fighter doesn’t have the ability to win without the crowd, then there’s not going to be any change with the fans making a lot of noise. The one thing that Brook’s fans can help him is with the scoring from the judges.

The crowd cheered Brook nonstop for the Gennady Golovkin fight. The judges were influenced enough by the cheering for them to many of the rounds to Brook rather than Golovkin. That shows you the real importance of Brook fighting in the UK in front of his own fans. If the judges are going to give him rounds in which he lands 4 good shots while ignoring Spence’s punches, then that could be more than enough for Brook to win the fight.

”It’s just going to be another day in the office for me,” said Brook about his fight with Spence. “I’m just going to do what I do best, just turn up. We will both maybe hit the canvas. The fans are in for a fantastic night.”

Brook isn’t a huge puncher. If you look at the guys that Brook did knock out, they were not top echelon fighters, and he mostly knocked them out with arm punches. Brook could be making a grave mistake if he tries to trade power shots with Spence on Saturday night. It could be playing with fire for Brook. He doesn’t have Spence’s power, and he would be a fool to even try and trade with the 2012 U.S Olympian. The crowd will definitely be there to support the 31-year-old Brook, but they won’t be inside the ring to take the body and head shots that he’ll be getting hit with by Spence.

Brook was looking really thin at the final press conference on Thursday. You could see Brook’s face was drawn and he looked small next to Spence when the two of them stood face to face. I think the weight loss could end up hurting Brook more than he thinks. Brook might feel fine for the first five or six rounds, but when the going gets tough, he could wind up taking a beating from Spence. That would be bad news for Brook. Having the boxing fans rooting for him is nice, but those fans aren’t going to be inside the ring giving him food and energy when things start going to pot in the 6th round.

The game plan that Brook used for the Golovkin fight might work for a while to get away from Spence. If you saw the Golovkin-Brook fight, you’ll have noted that Brook was on the run for most of the fight, and only periodically throwing a few token shots that the boxing fans went mad about. There weren’t enough shots from Brook for him to win any rounds. Even the 2nd round was one that could have gone either way.

”I’m fighting at home in front of my people. I’m going to draw energy from everyone who is watching the fight here and give him his first defeat,” said Brook.

Brook’s game plan for the Spence fight will be one of these things:

– Brawling with him: Brook might start out trading power shots with Spence, but I cannot see him sticking with this idea for long. Getting hit to the body is a lot different than getting nailed to the head. I don’t think Brook has ever fought anyone that has hit him with body shots other than Golovkin, who only threw occasionally to the body. Spence throws body shots all the time. Brook isn’t going to want that work on Saturday. I think Brook will abandon slugging with Spence once he gets hit hard to the body.

– Punching and grabbing: This is the approach Brook used against Shawn Porter. He would hit Porter with a punch and then dive forward into a clinch. Towards the end of the fight, Brook wasn’t even disguising his holding. He would dive forward into a clinch. The tactic worked well against Porter, but he didn’t have the foresight to plan on how to keep Brook from doing this. Spence has spent a lot of time in training camp in working on what to do if Brook holds a lot. I still Brook may try and hold. But it might not work nearly as well as it did for him against Porter.

– Moving and periodically throwing a few shots to impress the judges

– Staying on the outside and jabbing