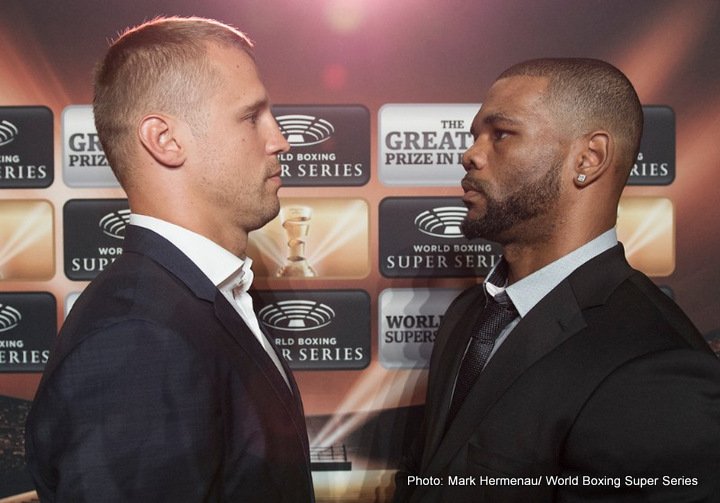 WBC World Champion Mairis Briedis (22-0, 18 KOs) and Mike Perez (22-2-1, 14 KOs) faced each other at a press conference in Riga ahead of Saturday’s Ali Trophy Quarter-Final clash at Arena Riga, Latvia.

“It is a great honour for me and for Latvia to have such a big fight and tournament in our country,” said Briedis.

“I am looking forward to showing that Latvia is not only a country with singers and dancers, but also some world class boxing. There are some pressure on my shoulders fighting in front of a sold out arena, but I am sure I can handle it.”

Mike Perez: “I am ready to fight, I can’t wait for Saturday night! It will definitely be a good and exiting fight.”

Responding to a rumour forwarded by a Latvian journallist that he struggles to make weight, ‘The Rebel’ said “I am here, what makes you think I am not going to fight! You will have to see at the weigh-in on Friday.”

“Rumour? We have had a very tight camp, so I don’t know where you have got that rumour from. The only guys who have seen Mike on the scales is the team, and I know who is a part of this team. So where ever you got that rumour they told you a lie.”

“It is lovely to be in Riga – the hunt for the Muhammad Ali Trophy is well underway. We have had a spectacular start, we have been in some great cities, we have seen some great boxing fans and some great boxing and this weekend we are expecting nothing less! We are looking forward to a totally full arena in Riga, the atmosphere will be amazing I am sure. There will be absolute fireworks between Briedis and Perez, we are going to see some tremendous action, a massive night of boxing that has never been seen in Latvia.”

“Saturday’s fight is not just a normal fight. They are fighting for the WBC world title and the WBC Diamond Belt and a spot in the semi-final for the Muhammad Ali Trophy and a hell of a lot money!”

The weigh-in Friday at 5 pm at the Radisson Spa and Conference Hotel in Riga is open to public and there are still a limited number of tickets on sale at https://shop.piletilevi.ee

Briedis-Perez meet this Sat. in WBSS in Riga

The “Briedis vs. Perez” card will give Canadian boxing fans another opportunity to watch world-class prize-fighters competing in the $50-million WBSS tournament, live from Latvia, exclusively on Super Channel, which acquired the rights in Canada to broadcast the World Boxing Super Series from MP & Silva, a leading international media company that provides media rights, digital, technology and sponsorship services.

The 32-year-old Briedis, who captured the WBC cruiserweight world title in his most recent fight, taking a 12-round unanimous decision from former world champion Marco “Capt’n” Huck (40-3-1) last April in Germany. A former European kickboxing champion, Briedis will have a distinct advantage fighting Perez at home in Riga, Latvia.

“I’m real happy being able to start the World Boxing Super Series at home in front of my own crowd,” Briedis said. “We fight to win the Muhammad Ali Trophy, but I am also putting my world title at stake. This is a big thing. For Latvia, this will be the first major world championship bout in history, so I hope to see a sold-out arena.

“From my previous experience with the Latvian crowd, I can really tell Mike Perez that boxing in front of a Riga crowd will not be easy for him. The boxing community around the world will learn how passionate and loud Latvia fans can be! My preparation camp has been going very well so far and I can assure my fans that I’ll be at my best when the 30th of September arrives.

“This is the first fight of the tournament, the first defense of my WBC World cruiserweight title, and I’m really happy that I will be able to do it in front of my home crowd. There are no easy fights in this tournament. Mike Perez has already made his name in the heavyweight division and seems to be in the shape of his life coming down to cruiserweight.”

Based in Cork, Ireland, where he defected to from Cuba, Perez will be fighting as a cruiserweight for only the second time having campaigned for most of his 9 ½-year pro career as a heavyweight. The 31-year-old southpaw doesn’t fear fighting Briedis in his backyard and he remains confident.

“It’s an opportunity of a lifetime,” Perez remarked. “Fighting in Latvia isn’t an issue for me. I don’t care where I fight. I’ll fight anywhere. I feel good, I’m confident, and I’m looking forward to Riga. I have a chance to become world champion in my very first fight in the tournament, so I couldn’t have asked for better.

Breidis is a good champion but I can’t wait to bring the belt home. I’m so lucky to fight for the Muhammad Ali Trophy and also become the undisputed cruiserweight champion in this tournament. I have no doubt that I will do just that. I have worked hard for these last couple of years and really dedicated myself to get this chance and nobody is going to take it rom me. I have lots of experience as both an amateur and professional, a lot of ability and now at cruiserweight I’m much faster on my feet and can throw faster combinations, so I feel like I’m a much better fighter. I really believe I can win the Muhammad Ali Trophy. That is how I see it. I think I will win. I cannot see anyone else winning it. I am the best cruiserweight in the competition.”

The “Briedis vs. Perez” winner will advance to the semifinals to face the WBSS No. 1 seed, undefeated World Boxing Organization (WBO) cruiserweight champion Oleksandr “The Cat” Usyk (13-0, 11 KOs), who stopped Huck in the 10th round of their WBSS quarterfinals fights this past Sept. 9 in Berlin.

Four exciting bouts on the “Briedis vs. Perez” card, promoted by Sauerland Event, will air in Canada exclusively on Super Channel.

In the co-featured event, former WBO Cruiiserweight World Champion Krzysztof Glowacki (27-1, 17 KOs), the dangerous Pole who ironically lost his title belt to Usyk a year ago, is slated to face Leonardo Damian Bruzzese (18-3, 6 KOs), of Italy by way of Argentina, in a 10-round WBSS Cruiserweight Substitute Fight. Also airing live on Super Channel is a 10-round light heavyweight match between Norwegian Tim Robin (16-3, 9 KOs) and Sergey Gorokhov (8-2, 6 KOs), of Russia. The televised opener finds 2016 Olympic bronze medalist Filip Hrgovic, of Serbia, making his debut against unbeaten Belgium heavyweight Ali Baghouz (10-0-1, 6 KOs) in an eight-round bout.

Email
WhatsApp
Tweet
Share
Previous boxing news: Sean ‘Masher’ Dodd says he’ll drag Tom Stalker into a fight
Next boxing news: Anthony Joshua, Deontay Wilder seemingly on a collision course – but where will it rank alongside the last great heavyweight fights?
You are here: Home / Boxing News / Briedis and Perez head-to-head in Riga: “There will be fireworks!”
Follow @boxingnews24