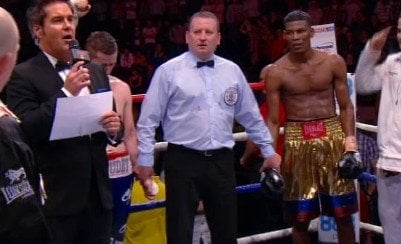 In truth, Breidis Prescott never again looked like the fearsome puncher he was on the night, ten years ago this year, that he shockingly obliterated an unbeaten Amir Khan inside a round in Manchester, UK. Since that night – THE night, fight and win of the Colombian’s career – Prescott has gone 11-12 and he has been stopped on four occasions.

On May 5, on the Golovkin-Martirosyan bill in Carson, California, 34 year old Prescott gets what is likely to be his last chance at winning anything big. Prescott, who has during his career faced nine fighters who entered the ring with him whilst sporting an unbeaten pro record, will face the 21-0 Ryan Martin. Unbeaten lightweight prospect/contender Martin, known as “Blue Chip” is a 25 year old from Ohio and he is a heavy favorite to hand Prescott his 13th loss.

All the same, the experienced, tough and tall Prescott (standing 5’11” the same as Martin, and with a long reach of 72”) might just prove to be a “live” underdog next Saturday night. Prescott, aside from smashing Khan, has been in with top names like Terence Crawford (losing a wide UD), Kevin Mitchell (the same result), Mike Alvarado (being stopped in the tenth of a great action fight that saw Prescott come so close to winning) as well as a number of young, up-and-coming fighters.

Prescott always comes to fight and he did pick up a stay busy win earlier this month when he decisioned a 8-31-3 fighter at home in Colombia, so he should be in good shape. It would be one enormous break for Prescott if he did, at this last chance saloon stage of his career, manage an upset win over Martin, as well as being one helluva bad break for Martin.

Win or lose, Prescott is normally involved in exciting fights so we could get a decent one next Saturday. With his very career so close to the finish line, Prescott just might be able to motivate himself like never before and fight his hardest. A Martin win is of course the pick, but Prescott could prove to be dangerous, especially early on in the fight.