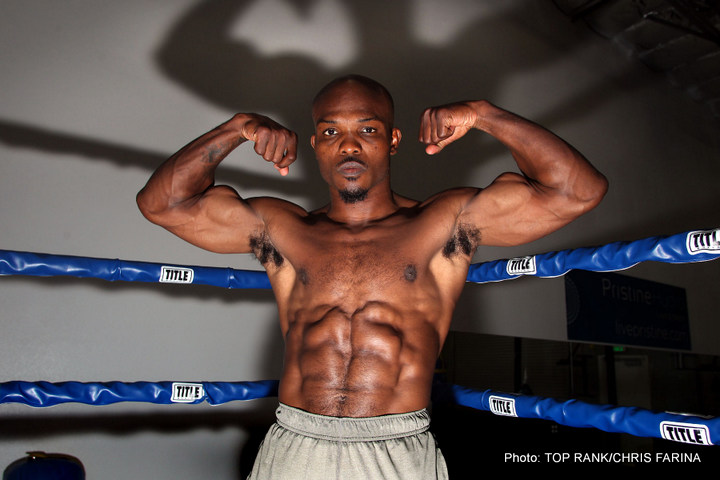 Timothy Bradley (33-1-1 13KO) was understandably jubilant with his ninth round TKO of Brandon Rios (33-3-1 24KO)at the Thomas and Mack Center, Las Vegas, NV. Everything went according to plan, one that his new trainer Teddy Atlas laid out for him. For much of the fight, Bradley was just too fast for Rios. He ripped off multi-punch combinations so fast that Teddy had to caution him a bit between rounds, telling him that it was okay to once in a while just throw a two or three punch combo and then move. When he wasn’t firing off combo’s, he was moving, side to side, in and out or up and down. Rios just couldn’t time him enough to land a good shot.

Rios proved once again the he has a good set of chin whiskers. His only way of showing that was to foolishly grin after his head was bounced around from the impact of Bradley’s gloves. Rios repeatedly was still there after Bradley’s best shots landed. To some fighters that fact can be discouraging. They start to doubt themselves and began thinking that they “Can’t beat this guy”. That’s when fighters like Rios start to take over. It is then that they start landing their own punishing shots.

Rios doesn’t worry that he is not a one punch knockout artist. Rather, he’s confident his punches are powerful enough to leave their mark and produce a definite droop in his opponents. However, Bradley wasn’t cooperating with Rios’ game plan. The Desert Storm was still creating havoc in the middle rounds, and the forecast for the later rounds was dismal.

A side light to the two combatants was all the fluff about Bradley changing trainers, and fans wondered “Will Bradley fight differently?” Will he be better. Robert Garcia, Rios’ trainer painted a different picture of what he thought might happen. He expressed confidence that things in the corner would go okay at first, but before long Teddy would go into his shtick. Robert thought Teddy might sit on Bradley’s stool! Garcia came close to being right when in the later rounds it seemed to be Teddy Time (Viking and QB Teddy Bridgewater). Atlas started speaking to Bradley in a normal voice, pointing out that Bradley needed to remain focused. Before long he was yelling at him. Thankfully Atlas stayed in the background post fight.

In the later rounds, Bradley sensed he was hurting Rios with some of his body shots, so he stepped up the body attack. Unlike his ability to deal with head shots, Rios proved more vulnerable when body shots dug into his belly. No amount of sit-ups can protect from a well placed body shot. Rios went down twice in round nine, the second time for good. Officially, it was a ninth round 2:49 TKO. Bradley walked away with the WBO World welterweight title

In the post-fight interview, Rios definitely looked the beaten man. Not only did he lose the fight, but his spirit and desire seemed gone as well. He talked of retirement, but In fairness to him, he is probably wrong. A gut ache can do that.

Saturday night he ran into one of the very elite guys in the division, someone who would be on the win side with most if not all the guys in the division. Before making such a tough choice, Rios owes it to himself to take some time off, get rested and healed and then decide what he wants to do.

Rios might be one of those guys who won’t know what to turn to in absence of boxing. They have no other hobbies or pursuits to occupy their time and satisfy their hunger. Rios probably needs to remain active in boxing until he’s figured out what life can be like for him if he does a little planning. In the meantime, as far as the fans are concerned, it’s a sure bet most would like to see him continue to be “Bam Bam” for a while.

The supporting bout featured sensational Vasyl Lomachenko vs Romulo Koasicha (25-5-0 15KO). Romulu was game, but outclassed. He strained and struggled through nine plus rounds, but he couldn’t match Vasyl’s speed and quickness. In the tenth round, Vasyl gave us a sample of what was to come in the main event. He had been ripping off blindingly fast combinations and changing angles so fast that Romulo didn’t know where the hell he was. Romulo tried to counter, but most times only bruised the air. He, like Rios, Is a tough guy. He demonstrated that he could take a hell of a lot of punishment to the face and head.

When Vasyl started loading up on shots to the body, the end was closing in on Romulo. Lefts where hammered into the breadbasket. Gasped and gulps for air led to sinking to a knee. Referee Robert Byrd counted out the brave warrior. The time was 2:35 of the tenth round. Vasyl keeps his WBO World featherweight title.

HBO’s Jim Lampley and Max Kellerman lathered on the praise of Vasyl’ talent and abilities. It got to be a little much. Viewers could see for themselves. They didn’t need all the hyperbole, exaggeration, embroidery, embellishment, puffery and overkill. Of course, no barb intended.