Trainer Derek ‘Bozy’ Ennis has a message for welterweight champions Errol Spence Jr and Terence Crawford they need to fight his son Boots, or else they need to move up to 154.

IBF/WBA/WBC 147-lb champion Spence has 120 days to fight his IBF mandatory challenger Boots after his next, or else he’s going to have to give up that belt.

If Spence has any illusions of still fighting WBO champion Crawford, he can forget it because that fight isn’t happening.

Crawford’s low PPV totals for his last fight against David Avanesyan on December 10th have effectively put him in a worse position to negotiate than before he bailed on the talks.

Spence will need to move on because Crawford is still going by his vision of being equal in the talks, and that’s not reality.

So it’s best that Spence fight Boots Ennis now or vacate and go up to 154 to fight his friend Jermell Charlo for his four belts.

“We’ll fight anybody. Look at us now. If you’ve been reading and the stuff on Youtube, we asked for those guys way back. Spence, Crawford, Thurman, Ortiz, Stanionis, all of them,” said Derek ‘Bozy’ Ennis to Fight Hub TV about him and Boots having called out Terence Crawford and Errol Spence Jr a long time ago.

“We weren’t on top at the time, but we wanted them at the time. We’ll fight anybody. We wanted to prove to us that we can make it with the big boys. We don’t care. I don’t pick out anybody, like a Spence or Crawford. It’s whoever has the titles. That’s what we want. 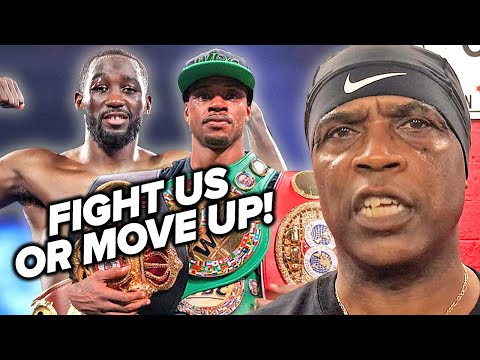 “If you ain’t going to fight us, move up. Spence, whoever he fights next, he’s got 120 days to fight Boots, and if he doesn’t fight Boots, he loses the [IBF] title.

“I know it’s not,” said Bozy when asked if he thinks that Boots could wind up like Demetrius ‘Boo Boo’ Andrade being avoided his entire career and getting older without ever having gotten a big-money fight.

“We tried to get Stanionis for that WBA regular title, but in some kind of way, they maneuvered Vergil Ortiz in.

“Boxing is not a game. You can get killed in this game. If you go in there play around with this guy, you’re going to wind up getting hurt,” said Bozy Ennis about Boots’ opponent Karen Chukhadzhian. “If we see an opening, we’re taking it. That’s how it is.

“That’s a good fight, and they both fight similar, so you know it’s going to be a rock em, sock ’em fight,” said Bozy when asked about his thoughts on the Eimantas Stanionis vs. Vergil Ortiz Jr fight.

“The speed does kill, but he can also sit down on any punch. He can sit down and place his shots. He’s real accurate, if you hadn’t noticed. Once he gets in the ring, he turns into an animal. That killer mode.

“Outside, he’s done of the nicest guys in the world. That’s what’s in him. I raised all my sons like that. Once you get in the ring, you got to go ahead and do your thing. I always tell him to have fun doing what he’s doing but make sure you do it the right way though.

“The other ones were the same way, but they got talking to the girls and partying,” said Bozy about his other sons. “Like I was telling them, ‘I never heard y’all say you want to be world champion.’ But Boots, he learned from them two, and they also teach him. ‘Don’t do what we did.’

“I trained him on the southpaw side first, and then I switched him back up. He do it automatically now,” said Bozy about Boots.