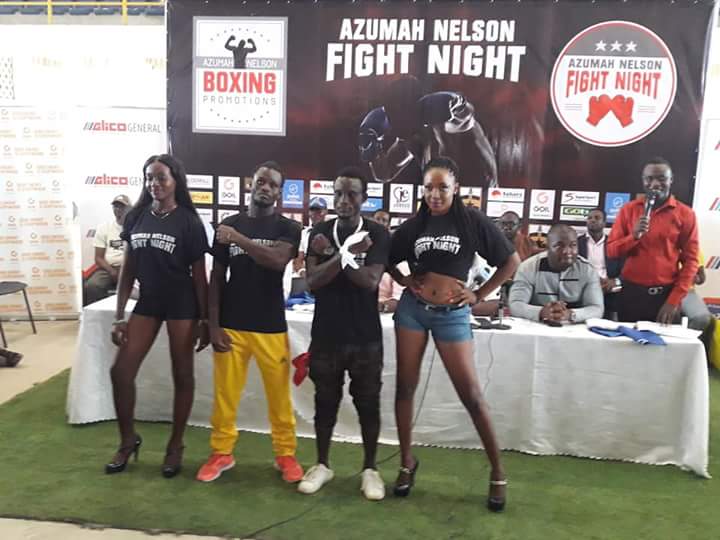 The countdown is over and all ten boxers scheduled to fight Saturday night on the Azumah Nelson Fight Night – The Battle boxing extravaganza to honour Ghanaian ring legend, Azumah Nelson in Accra, made their required weights to set up five evenly-matched bouts at the plush Bukom Boxing Arena.

Born on 19 July, 1958, Nelson, a former 3-time, 2-division world champion celebrated his 60th birthday on Thursday which will be consummated with fight action, fittingly for the man who was inducted into the International Boxing Hall of Fame in 2014 and has been recipient of both the WBC greatest super featherweight of all time and legend gongs.

Also fitting is the main event at Nelson’s favourite division, the Ghana super featherweight championship between the reigning champ, Abraham Osei Bonsu (12-2-1, 10 KOs) and undefeated Patrick ‘Alige’ Ayi (18-0, 10 KOs). Both boxers tilted the scales at the same exact 130 lbs limit to set the stage for what will be a first defence of the title by Osei Bonsu, nicknamed ‘No Shaking’ who won it following a majority decision verdict over Felix Ajom in the only fight to take place on the rained-off Azumah Nelson Fight Night at the same Bukom Boxing Arena in December last year.

Another super featherweight bout on the must-see bill is the final eliminator to the national title between big talking but fearless Michael ‘One Bullet’ Ansah (14-8-2, 10 KOs) and Isaac ‘Zongo Fire’ Dowuona (7-2, 5 KOs) with the winner hitherto assured of challenging the Bonsu-Ayi winner for the Ghana super featherweight championship next. Both boxers however exceeded the 130 lbs limit, Ansah weighing 133 and Dowuona, 132 to throw their eliminator into doubt even though the fight will still come on as scheduled.

However the fight sure to light up the occasion is the Ghana national lightweight title fight between Sheriff ‘One Time’ Quaye (14-1-1, 8 KOs) and old foe, Benjamin Lamptey (10-1-1, 8 KOs), a rematch of their epic battle to mark the inauguration of the very venue they fight at tomorrow back in November 2016. Quaye edged a split points decision on that occasion to get decorated by then Ghana President, John Mahama to win the same title they fight for on Saturday night but Lamptey, nicknamed Daddy Lumba after the famed Ghanaian highlife singer he looks exactly like, has never accepted the verdict and will get the opportunity to make amends for his only career defeat after making the weight limit of 135. Quaye struggled, coming in above at 137 initially but made 135 after a few workouts right at the weigh-in.

Concluding the rich line up of fights put together by top Ghanaian matchmaker, Rasheed Williams AKA Coach Believer, is the light heavyweight contest between Emmanuel Danso alias Kwahu Tyson (28-3, 23 KOs) and former kickboxer, Stephen Abbey. Danso who is coming off two straight losses in China last October and Russia only last month, weighed just over the 175 lbs limit at 176. Abbey who lost a previous fight to Danso in 2013, weighed 172.

“I am overwhelmed by the love and support I have received from Ghanaians, I’m so grateful. I thank everybody and I pray that whatever you do, you will also get a good reward,” Azumah Nelson said at the pre-fight press conference during when a happy birthday song was sung in his honour.

“The best way to celebrate this is with the good fights we will see in the ring tomorrow. You don’t need me to tell you, everybody saw how the boxers warner each other during their face-offs. All I can say is I expect to see everybody tomorrow and please be there early,” the great Azumah Nelson said.