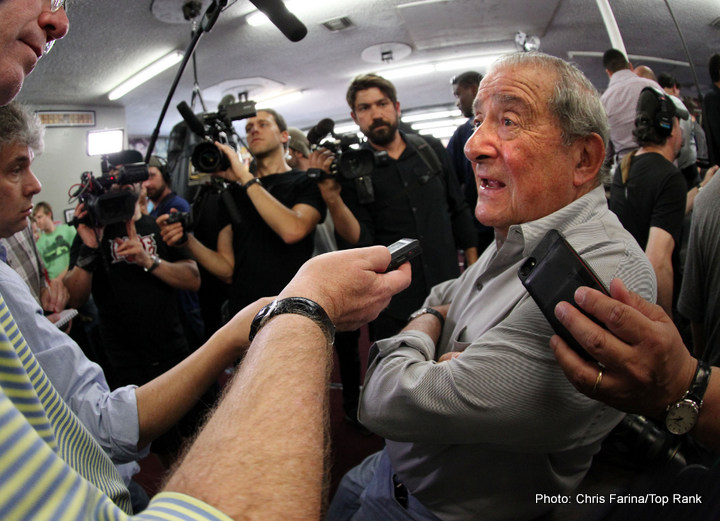 Will superstar Manny Pacquiao really call it a boxing career and walk away into a fulltime life of politics after his April 9th rubber-match with Tim Bradley? Pacquiao has repeatedly said this will indeed be his last one, but not everyone is convinced – least of all his promoter Bob Arum.

In speaking with Gareth A. Davies in an exclusive for The Telegraph, the 84-year-old Top Rank boss said he strongly feels Pacquiao will, like so many of the other fighters he has worked with his in 50 year career, have the urge to box again.

“I think this is a very important fight for Manny,” Arum told Davies on the subject of the upcoming Bradley fight. “He’s been off for eight months. Guys are telling me that he’s reinvigorated in the gym and it’s the old Manny. We’ll have to see. Bradley is a much improved fighter. Teddy Atlas has done a great job with him. Manny has to be in top form. He says this is his last fight. You can take that with a grain of salt. I think he believes it’s going to be his last fight. But I’m not saying it’s his last fight. This isn’t my first rodeo. I’ve had a lot of fighters tell me this is their last fight and six months later they’re back in the ring.”

Arum went on to recall how greats including Sugar Ray Leonard, George Foreman and even Floyd Mayweather were unable to retire – “how many times has Floyd Mayweather retired?” Arum asked – and that the lure of the limelight as well as the money simply proves too much. And Arum made another good point when he stated that it if Pacquiao has an outstanding showing against Bradley, he will very much want to fight on.

If, however, Pac-Man either loses or looks poor in winning, the retirement option may well be taken. Bradley might have beaten Pacquiao via a controversial, almost universally condemned decision in their first fight, but the younger man in this fight by five years is as tough a fighter as can be imagined and Bradley always believes with all his heart he is going to win. Would it be a huge shock if Pacquiao lost on April 9th, say by close decision? No.

But if Pacquiao has somehow managed to roll back the years and is looking great in the gym, maybe he will close the story on his rivalry with Bradley in style. One thing Pacquiao must do is look better, and fight with more explosiveness, than he did in his last fight; the hugely disappointing “Fight of the Century” with the “retired” Floyd Mayweather Junior. Could these two even wind up fighting again one day? Nothing can be ruled out, as Arum would likely agree