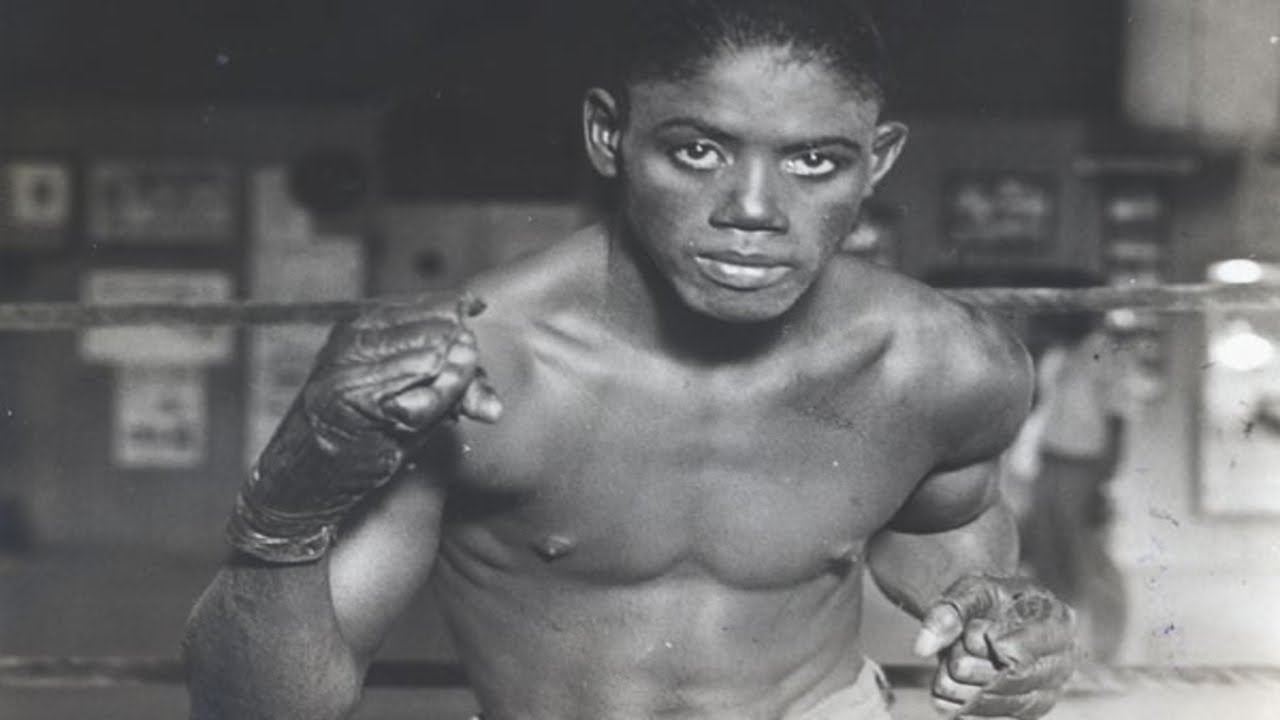 It was July 26, 1929 when 19-year old Kid Chocolate (aka Cuban Bon Bon) made his Canadian boxing debut at the 3-year old Maple Leaf Stadium in Toronto. He was already an elite pugilist whose masterful skills were displayed on a frequent basis to a beckoning world. He experienced no losses in the 37 pro bouts he had fought since turning pro in October 1927, and the Cuban-born Eligio Sardinias Montalvo also sported an unblemished record in his prior 22 amateur fights.

Homeboy Jackie Johnston didn’t stand a chance – not that he was expected to provide anything other than token opposition. He had a decent of record of 25-12-5 against lesser known opposition in the Toronto-Buffalo-Detroit boxing circuit.

Lou Marsh at the Toronto Daily Star was blunt in his description of the one round beatdown: “One-TWO! A pair of padded black fists flailing. Thud-THUD! They landed-left then right. A white boy spinning in the air, CRASH! One-two-three- four-five…The white body on the floor quivered spasmodically – and rolled a bit—the desperate effort of a game athlete with a fist-fogged brain trying to return to the fray. Six-seven -eight-NINE! The white boy rolled again, drew his knee up under him, and tried to force himself upright. His arms, apparently paralyzed, lay under him so he used his chin as a lever. TEN! YOU’RE OUT!! yelled the referee..”

The local boy’s dream of fistic fame came crashing down for good at the two minutes and fifty-seven seconds mark of the round. Ironically, most in attendance felt Johnston was well ahead when the proverbial bottom fell in. The Cuban Bon Bon seemed to be doing nothing else than block and retreat, but he was actually feeling his way around cautiously and studying his opponent for an opening.

The turnaround was quick and devastating: a ripple of punches into the mid-section, a cuff on the ear with Johnston rolling his shoulder high to cover a fast jab directed at his brittle jaw. He took the punch with his head rolling back. It was good defence but the Kid followed with a panther like leap which led to a straight right that clipped Johnston flush on the edge of the jaw, and he went down. That was all there was to it. Another Toronto sportswriter remarked: “It isn’t that he’s such a great puncher, but that he’s such a precise puncher.

Few fans saw the punch, because it traveled a distance of no more than 6 inches. For less than 3 minutes of work, it earned Kid Chocolate a $9500 payday while marking the 22th knockout win of his 22-month pro career. Via whirlwind activity extending for the duration of that year, the Kid collected 11 more consecutive wins – seldom entering the ring with more than 10 or 12 days between bouts.

By 1929, KC was consistently fighting the top-ranked featherweights, super-featherweights, and lightweights in the world. He quickly established himself as a headliner attraction in the New York City vicinity, fighting at least once a month at such legendary boxing palaces as St. Nicholas arena, the Olympia Boxing Club, Brooklyn’s Fort Hamilton and Broadview arenas, Jamaica Arena in the Queens, Madison Square Gardens, Ebbets Field, and the Polo Grounds. He also found the time to keep his Cuban fans happy by occasionally venturing down to Havana and showcasing his elite skills at the Arena Cristal.

After the tiff in Toronto, the Cuban Bon Bon won 16 consecutive fights before dropping a controversial 15-round split decision to Jackie “Kid” Berg aka the Whitechapel Whirlwind (157-26-9) from England. It was the Cuban scrapper’s first test as a lightweight. A shot at the lightweight title against Tony Canzoneri (141-24-10) in November 1931 at MSG yielded another heartbreak loss via an even more controversial decision.

In October 1932, the Cuban Bon Bon won the New York version of the world featherweight title by 12th round KO against Lew Feldman (116-55-18) and defended the title twice: first against the highly regarded Fidel LaBarba (69-15-6) in December 1932; and then in January 1933 by decisioning Seaman Tommy Watson (112-9-2): considered the greatest featherweight to ever hail from the British Isles.

Following that, Kid Chocolate notched 2 victories in Spain, 1 in Paris France, as well taking 10 rounds to win a majority decision against Joe Ghnouly (70-30-10) on November, 1933 at Montreal’s Forum. The Kid spent most of 1935 and 1936 chalking up wins in Cuba and Venezuela.

Most of the all-time greats never knew when to quit the game (the most current example being Roy Jones) but the Cuban dynamo broke the mould, as his last 30 fights leading up to his December 18,1938 retirement were marred by only 3 draws and one decision loss. The Kid retired at the young age of 28, but still at the top and with a phenomenal pro record of 156-10-6.

Sugar Ray Robinson was a disciple of Chocolate – studying the Kid’s flamboyant flair and slick moves to develop his own boxing style – while also incorporating the masterful combinations and punching know-how of his other idol Joe Louis.