Undefeated heavyweight prospect, Bakhodir Jalolov knocked out Jack Mulowayi in the eighth and final round from a hard left uppercut, in the main event. Mulowayi was immediately counted out by referee Benjy Esteves Jr., (who called for the EMTs to come into the ring) at one minute and twenty seconds, as he landed (flat on his back) hard on the canvas and laid motionless for several minutes after which, he slowly got up. Jalolov has knocked out every opponent he has faced in his career (11-0, 11 KOs).

“ShoBox: The Next Generation” tripleheader was promoted by Lou DiBella’s DiBella Entertainment from Turning Stone Resort Casino in Verona, New York, during the Boxing Hall of Fame weekend (DiBella was inducted into the Boxing Hall of Fame, as part of the 2020 class of inductees). The main event and the two co-features were televised on Showtime Championship Boxing. 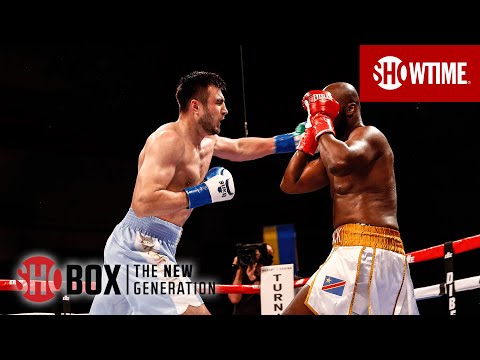 After a feeling out first-round by both fighters, Jalolov took over the bout from the second round on, as he landed several powerful left-handed body shots, jabs, and hooks that rocked Mulowayi throughout the fight. Mulowayi’s right eye began to swell in the second from the punishment that he received in the round. He staggered Mulowayi in the third from a left hook. Jalolov was deducted a point in the fourth by referee Esteves for holding Mulowayi, after being warned repeatedly not to do so.

The two-time Olympian (2016 and 2020) and super heavyweight gold medalist (last year) connected on a left hook that had Mulowayi in trouble in the fifth. He then landed a massive left hook that knocked Mulowayi down (he walked into the punch) just as the sixth round ended. Mulowayi barely beat referee Esteves’ ten-second count. Jalolov kept up his offensive pressure in the seventh, as he staggered Mulowayi with a left hook, but he could not put him down again.

George Arias defeated Alante Green via an eight-round split decision (judge Don Trella scored the bout for Green (77-75), however, he was overruled by judges, Eric Marlinski (77-75) and Tom Schreck (78-74), who awarded the decision to Arias), in a battle of unbeaten heavyweight prospects.

Arias upped his record to 18-0, 7 KOs. This was his second consecutive split decision win (he beat undefeated Cassius Chaney, last December). Green, who moved up from the cruiserweight division for this fight, fell to 10-1-1, 7 KOs. Arias controlled this bout, as he out-worked and out-landed Green. He also got the better of the exchanges and connected on the harder punches, in a fight that did not appear to be as close as the scorecards indicated.

Chann Thonson beat Tyler Tomlin via a fifth-round technical knockout, as this action-packed, extremely competitive lightweight bout was stopped by referee Mark Nelson at one minute and one second, on the advice of the ringside doctor due to a massive cut over Tomlin’s right eye (from a right hook) that was bleeding profusely and covering the canvas with blood. Thonson improved to 11-0, 8 KOs. Tomlin dropped to 13-1, 9 KOs.