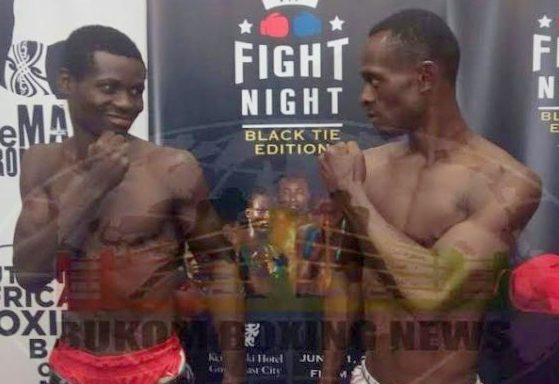 All is set for the first Azumah Nelson inspired VIP Fight Night Saturday night at the Ballroom of the five-star Kempinski Gold Coast City Hotel in the Ghana capital, Accra following successful weigh-in by the fighters on the bill.

Nelson, the former 3-time world champion and Hall of Famer has personally selected the boxers for the black-tie event being staged by Hemann Promotions in association with Azumah Nelson Boxing and sanctioned by the Ghana Boxing Authority.

All ten professional boxers scheduled to fight on the night made their respective weights at Friday’s pre-fight weigh-in and are in line to showcase the skills before an august audience later tonight in a show that will also be screened across over 54 countries in Africa and even beyond.

In other fights, hot prospect, Sherrif ‘No Size’ Quaye made 137lbs against Felix ‘Alvaro’ Ajom’s 132lbs ahead of their super featherweight contest, Michael ‘Black Punch’ Dodoo (138lbs) versus Raphael ‘King-One’ Kwabena King (139lbs) in a Lightweight contest whilst Ghana based Nigerian, Felix Williams (129lbs) clashes with Tackie Annan in a featherweight contest.