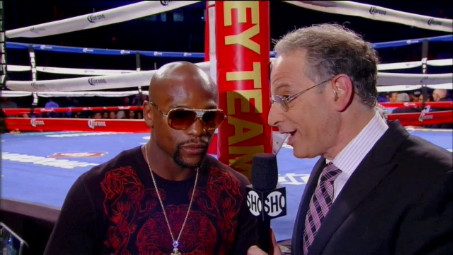 Top Rank promoter Bob Arum has no interest whatsoever in staging the mega fight between his fighter Manny Pacquiao and Floyd Mayweather Jr on the Mexican holiday on May 2nd. According to Arum, he sees this as disrespectful to the Mexican people that Mayweather wants to fight on the May 2nd date, which is the Cinco de Mayo holiday.

Arum sees that May 2nd date belonging to Mexican fighter Saul “Canelo” Alvarez, who was not long ago easily beaten by Mayweather. The idea is Canelo will fight Puerto Rican Miguel Cotto on the May 2nd date instead of Mayweather fighting Pacquiao. Arum promotes Cotto, so it’s a win-win situation for him if that fight goes ahead on May 2nd. Arum prefers the Mayweather-Pacquiao fight to take place in April or June of next year.

There’s no word from Mayweather whether he’d be open to doing it Arum’s way. However, chances are that Mayweather won’t be pleased to be moved off his May 2nd date by Arum, and it could easily be a situation where Arum wins the battle but loses the war with his fighter Pacquiao not getting the Mayweather fight at all.

“The only Mexican who is a draw on that date is Canelo (Saul Alvarez),” Arum said to the Telegraph.co.uk. “I think it’s disrespectful to the Mexican people not to have Canelo fight on their holiday. I see Mayweather as poaching on a Mexican holiday and being disrespectful to the Mexican people. He is putting his ego before respect for people. April or June would be fine for that fight (Mayweather-Pacquiao). What difference does it make?”

It would be sad if Arum’s move to have the May 2nd date for Canelo-Cotto winds up costing him the much bigger fight between Mayweather and Pacquiao. I’m not sure if Arum realizes how elusive this fight has been. It seems like the logical thing for him to do is to try and make the fight happen when Mayweather wants the fight, because if he angers him he could very well see the door closed on his face forever.

To be sure, those are decent numbers, but is it really worth it to lose out on a mega-fight between Mayweather and Pacquiao for a fight that will do far less numbers? Arum is the expert in these kinds of things, but you can’t help thinking that he’s backing the wrong horse in this race by choosing the Canelo vs. Cotto fight for the May 2nd date over the Mayweather-Pacquiao, especially when this move could alienate Mayweather and cause him to walk away permanently from any talks of fighting Pacquiao.