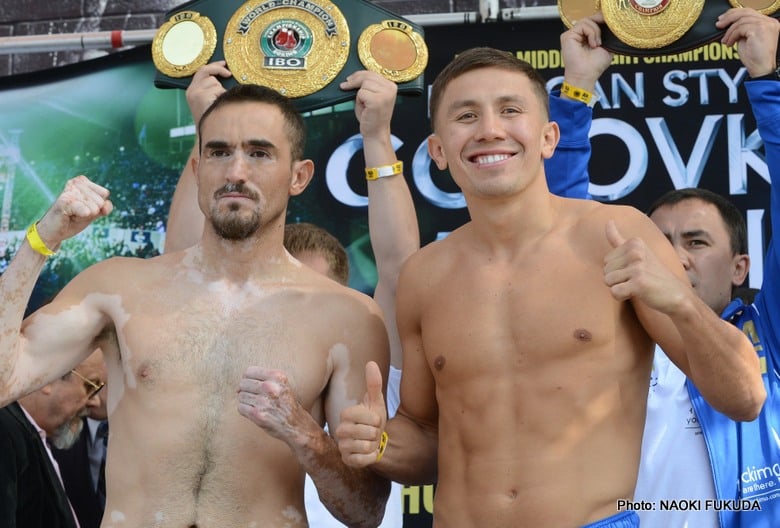 (Photo credit: Naoki Fakuda) Top Rank promoter Bob Arum is expecting #2 WBA Marcos Antonio Rubio (59-6-1, 51 KOs) to give World Boxing Association Super World middleweight champion Gennady Golovkin (30-0, 27 KOs) a tough time tonight when the two sluggers clash at the StubHub Center in Carson, California. The fight will be televised on regular HBO, and it should a good fight for as long as it lasts.

Arum thinks that most of Golovkin’s opponents come into the fights against him intimidated by his reputation, and that makes tougher to beat.

“Golovkin beats a lot of people before the first bell based on his reputation,” Arum said via esnewsporting.com. “He’s so intimidating that guys are scared to death. There’s no question about that. That’s always the case with a bruising, hard-punching fighter like Golovkin. That’s part of his mystique. I think Rubio is going to give him a good battle, but I think there’s only going to be one winner in that fight, and that’s Gennady Golovkin,” Arum said.

It’s debatable whether Rubio will give Golovkin a tough time tonight. Based on how Rubio looked in his two biggest fights of his career against David Lemieux and Julio Cesar Chavez Jr, I would say this is going to be a very, very easy fight for Golovkin. Rubio looked like a punching bag in both of those fights. He did beat Lemieux, but only because the Canadian fighter gassed out after the 5th round.

Rubio took a beating in that fight against a guy with zero experience against quality opposition. Arum is correct about Golovkin being the one to win this fight, but I believe he’s completely off base by saying it’s going to be tough for Golovkin. It won’t be a tough fight, believe me.

Rubio was fined $100,000 for failing to make weight during Friday’s weigh-in when he came in over the middleweight limit at 161.8 pounds. It’s really surprising that Rubio didn’t make weight, because that should have been the main focus for this fight.

With Rubio having very little chance of actually winning, he should have been dialed in on getting his weight right because losing $100K of his $450,000 purse is a huge amount. It’s not as if he would have a chance at making it up with the pay-per-view upset for the fight, because it’s not going to be televised on PPV.