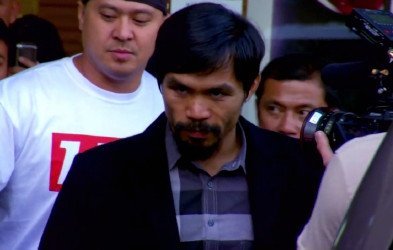 Tim Bradley is no out of the running for the fight. However, Arum has something planned for him. He wants to have Bradley fight next in New York at Madison Square Garden so that he can have some visibility there according to ESPN. It could be that Arum is possibly hoping that he can get Miguel Cotto to agree to fight Bradley in the near future.

It’s hard to imagine a fight between the 5’6″ Bradley and Cotto. It might be a mismatch, but casual boxing fans will go for it. Arum doesn’t have a lot of other fighters to use at that weight for Bradley, so one of his ex-fighters like Cotto could be a good alternative if Arum can get that fight made.

In the meantime, Pacquiao’s trainer Freddie Roach isn’t happy about Pacquiao fighting Marquez again, saying to RingTV “I don’t like that fight. It’s a very difficult fight. I think we’d go in three to four rounds down already.”

Pacquiao has won two controversial decisions over Marquez. I guess it wouldn’t hurt for Marquez to finally win one himself. A lot of boxing fans feel that Marquez should have won all three fights.