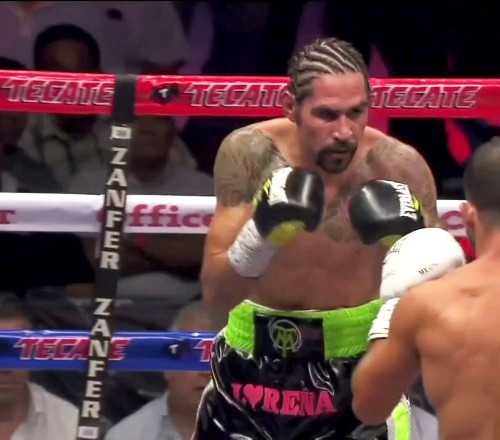 Mexican warrior Antonio Margarito is now 2-0 into his latest comeback – a comeback the 38-year-old launched even though his eyesight may be in clear and present danger as a result – and he is now looking and calling for a big fight. On Saturday, Margarito scored a decent enough points win over Ramon Alvarez, registering a knockdown along the way to his 10-round split decision victory. The fight took place at super-welterweight, with former world champ “Tony” picking up a WBO bauble along with the win. But the really disturbing news came in the form of what Margarito, 40-8(27) called for after his latest win: a fight with the primed and peaking Saul “Canelo” Alvarez.

Canelo, the brother of Ramon, was ringside last night and Margarito says he feels the win he picked up over his brother shows he has what it takes to defeat the superstar with the cinnamon hair. Margarito says he wants Canelo next, in December, and assuming Canelo gets past Liam Smith in September this gross mismatch could actually happen. Years ago, this match-up would have been a genuine grudge-match between two Mexican greats (or near greats) with fans everywhere wanting to witness the action. But now, forget it. At least Margarito should forget it.

As a payday, yes, the fight would be beneficial to today’s slow, sluggish and punch-pushing Margarito, but in no other way would he benefit. And neither would those fans foolish enough to expect anything other than a nasty beat down of a once formidable fighting machine. If this fight does happen – and unfortunately in today’s world there are enough uncaring and unscrupulous people willing to stage such a mismatch in the name of monetary profit and nothing more – those who tune in will see a savagely one-sided “fight:” think Canelo against that other faded Mexican slugger Alfredo Angulo, only worse.

Maybe far worse. Does Margarito want to go blind? Are we willing to watch him fight as he risks this very handicap (and maybe even worse)? Is Canelo willing to act as Margarito’s contract killer?

Even in today’s version of the sport we all love so much we can hope not. There is only one man Canelo should be fighting and we all know he is not even a Mexican. Margarito? He should be relaxing somewhere in Tijuana, telling fans all about his great fights. Canelo-Margarito would not, will not, and cannot be anything approaching a great fight.