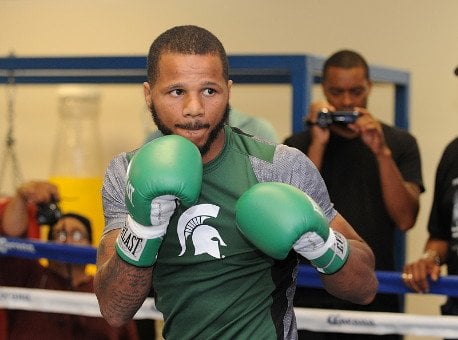 Michigan’s former WBC 168 lb champion Anthony Dirrell has confirmed that he will return to the ring on September 6th against Mexican veteran Marco Antonio Rubio in Corpus Christi, Texas.

After being upset back in April in a voluntary defence of his title against Sweden’s Badou Jack, it’s expected Dirrell should have too much for the 35 yr old Rubio, who is moving up from 160 lbs following his knockout loss to big-hitting Kazakh knockout artist Gennady Golovkin last October.

“I’m ready to get back in the ring and prove that I’m still one of the most dangerous men in the game,” said Dirrell, whose older brother Andre recently lost out to Britain’s James DeGale in a bid for the IBF 168 lb strap.

“Rubio is a tough guy, but I’m coming to knock him out and eventually get my title back. ‘The Dog’ is coming to Texas looking to inflict some pain.”

Rubio, who in 2011 knocked out new IBF middleweight champ David Lemieux, said of the fight;

“I’m very excited to face Anthony Dirrell on Sept. 6. This is a tremendous opportunity for me and I’m going to leave it all in the ring. I promise a great fight for all the fans that come out in Texas.”