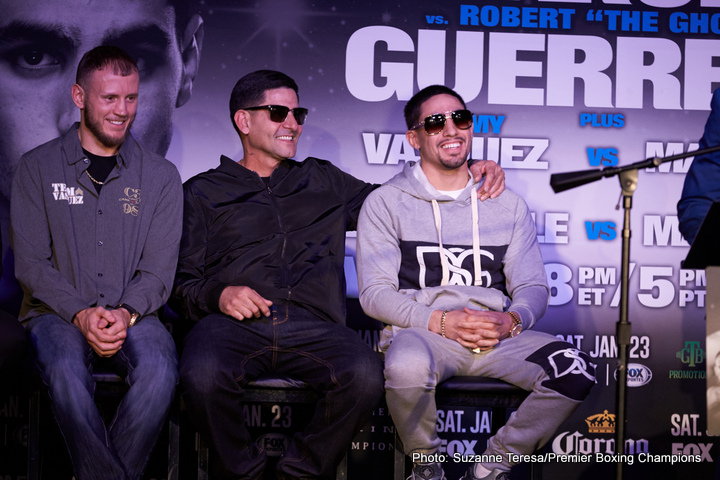 We all know how vocal (and entertaining) Angel Garcia, father and head trainer of WBC welterweight champ Danny Garcia, can be, and with “Swift’s” big upcoming fight against rival welterweight champ Keith Thurman set for next March, Angel has fired some serious shots. Speaking with Premiere Boxing Champions, Angel came out with a bold prediction: his son with knock the unbeaten Thurman out cold inside just five rounds on March 4.

“Danny knows he’s the number-one king,” Angel said. “But just like [when he was fighting] at 140, they don’t give him respect and they talk about him like he’s a nobody. We like it when the odds are against Danny, though. He makes his toughest fights look easy. [Amir] Khan was way better than Thurman, who will go for the KO with big right hand hayemakers for three rounds. But Thurman’s going to be shocked when Danny makes him eat it. Third round, Danny’s gonna start jumping on his ass, hurt him to the body like [Luis] Collazo did, and then Thurman’s getting knocked out cold in the fifth round.”

Thurman, and his fans, are likely to disagree. When has Garcia, also unbeaten, shown real punching power up at welterweight? Never. Garcia was a hard hitter at 140, where he beat good fighters in Khan (who has never had a great chin) and Lucas Mattyhsse (arguably Garcia’s biggest and best win so far) but at 147, he has yet to look the same force. Maybe Angel is right and Danny will rise to the occasion in a major way in the fight with Thurman, but if the prediction comes true a whole lot of people will be very shocked.

But Angel, who really does do most of his son’s talking for him, says that Danny will look for even bigger names to fight once he has dealt with the WBA champ known as “One Time.”

“After that, if Mayweather comes back from retirement and wants to, we’ll take that fight too,” he stated boldly. “Danny wants the top guns in the division.”

Garcia is likely to get the big guns if he can topple a very big gun in Thurman. But will Floyd even box again? That’s a whole different question.