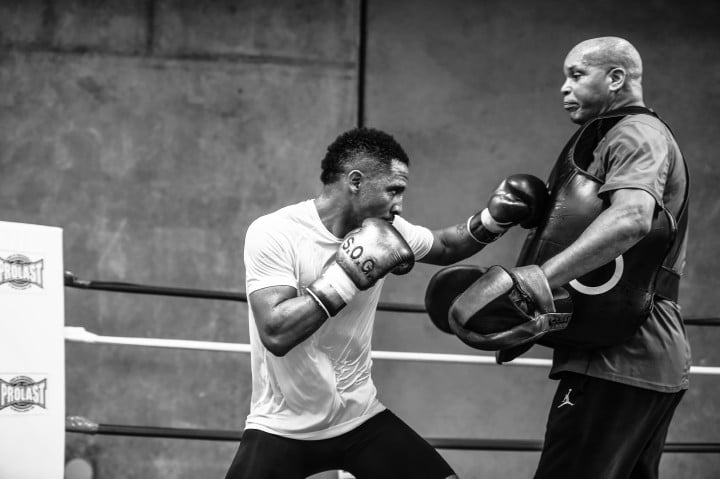 Two-Time World Champion Andre “S.O.G.” Ward (30-0, 15 KOs) officially kicks off training camp in Hayward, CA with trainer Virgil Hunter ahead of his November 19 showdown at T-Mobile Arena in Las Vegas against WBO, WBA and IBF Light Heavyweight World Champion Sergey “Krusher” Kovalev (30-0-1, 26 KOs). Ward’s training camp, which will serve as a base for Ward over the next several weeks as he continues his quest to dominate the light heavyweight division, is sponsored by a resounding collection of American-based companies including Jordan Brand, Shoe Palace, JetLux, and ProSupps.

Below is what Team Ward had to say about the start of training camp:

“I’ve been in pre-camp mode for weeks now following my last fight, and have been mentally preparing for the work ahead of me. It’s an exciting feeling to be in full camp mode, where I can dedicate 100% of my mind, body and soul to the battle I am about to face. This is a fight that we have been working up to since last spring. The game plan hasn’t changed. I am here and I am ready.”

“No one beats Andre Ward when it comes to training camp. We’re going into camp with the mentality of another day, another fight, another win. His strive for perfection, work ethic and consistency is what makes him a champion.”

“With everything set for the biggest fight of the year on November 19, we are excited to open training camp. What is done here for the next few weeks will play a major part in the final outcome. We thank God for the opportunity and look forward to giving the boxing community and all of our fans, the fight that they have been anticipating.”

Tickets for the most anticipated fight of the year are on sale now and start at $55 on axs.com and at the T-Mobile Arena box office.

Kovalev vs. Ward “Pound For Pound”, a 12-round mega-fight for the WBO/IBF/WBA light heavyweight title at T-Mobile Arena in Las Vegas, is presented by Main Events, Roc Nation Sports, Krusher Promotions and Andre Ward Promotions and is sponsored by the MGM Grand Hotel & Casino, Rosneft and Corona Extra. The championship event will be produced and distributed live by HBO Pay-Per-View® beginning at 9:00 p.m. ET/6:00 p.m. PT.