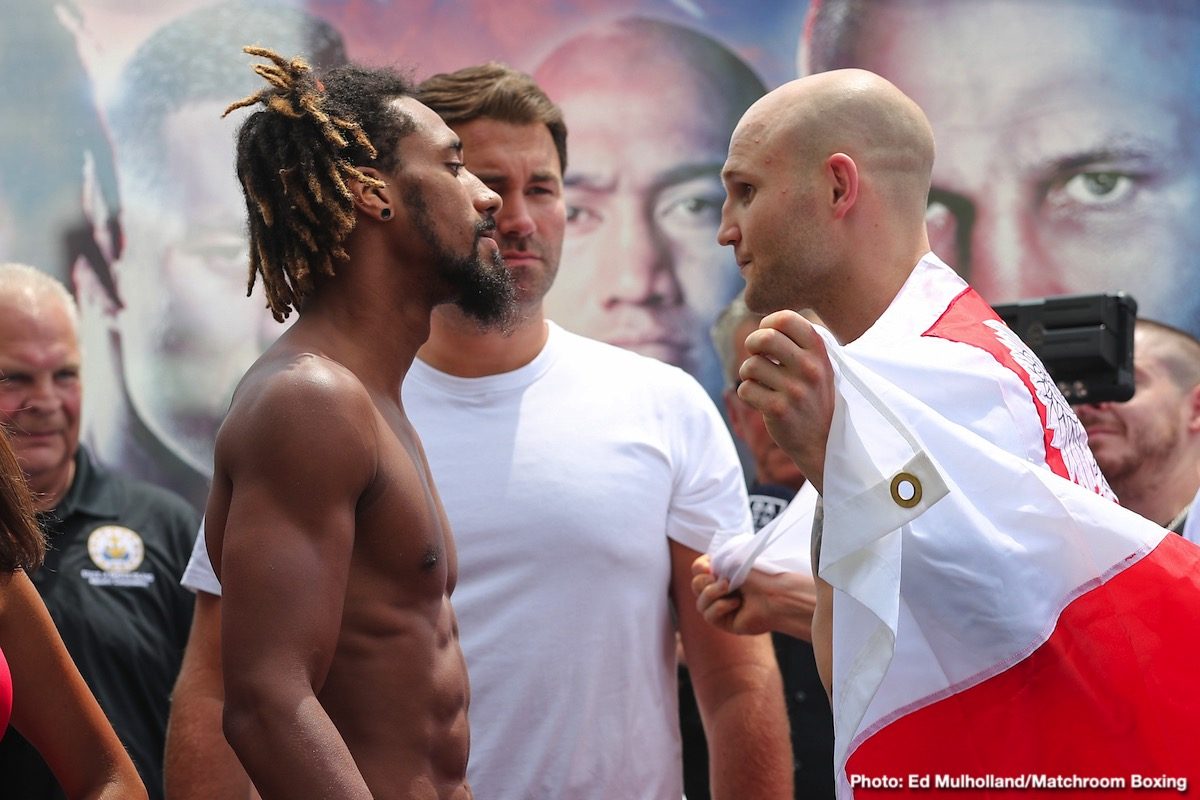 WBO Middleweight World Champion Demetrius “Boo Boo” Andrade (27-0, 17 KOs) and dangerous challenger Maciej Sulecki (28-1, 11 KOs), along with all of the undercard fighters, successfully tipped the scales at Waterplace Park in Providence, Rhode Island, ahead of their highly-anticipated title fight tomorrow night, which will stream live exclusively on DAZN.

Andrade’s title defense against Sulecki is part of a blockbuster night of action as unbeaten Kal Yafai defends his WBA Super Flyweight title against mandatory challenger Norbelto Jimenez and former Heavyweight king Joseph Parker takes on Australian challenger Alex Leapai in a scheduled 12-round heavyweight fight. All three fights will be featured on the evening’s main card, which kicks off at 9 p.m. ET.

Undercard action begins at 7 p.m. ET on DAZN with three fights, highlighted by a 10-round scrap between Mark Deluca and Brandon Brewer. 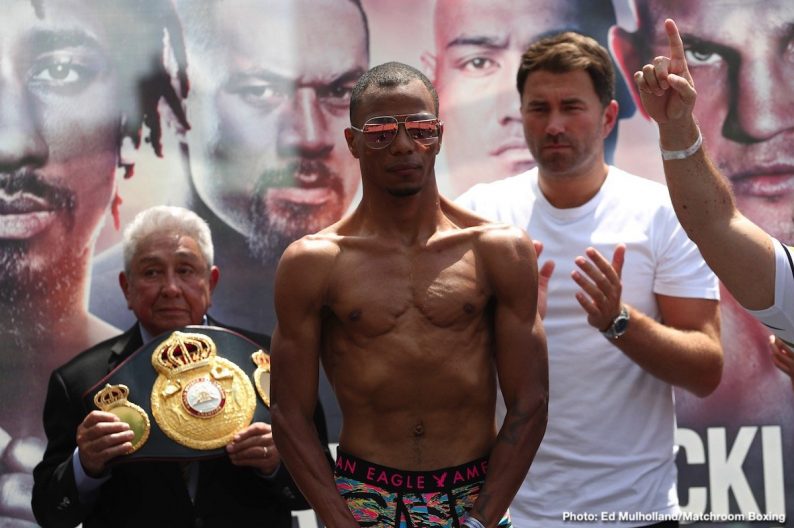 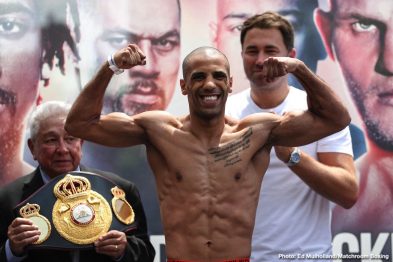 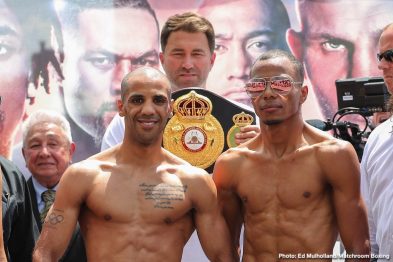 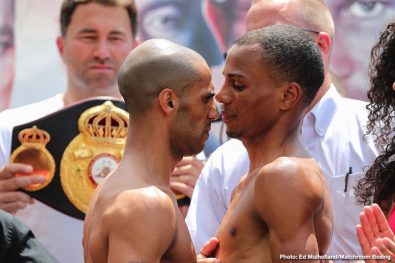 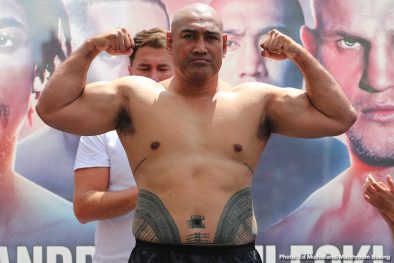 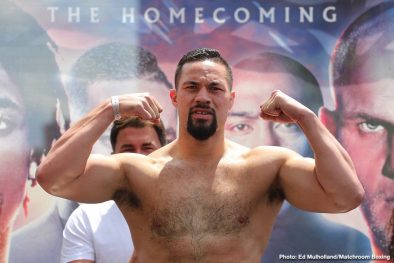 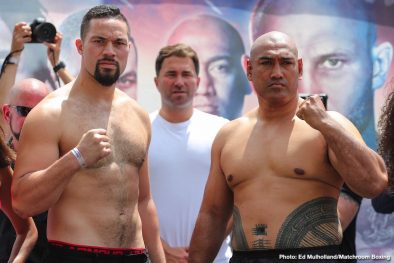 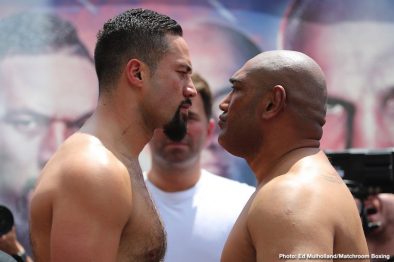 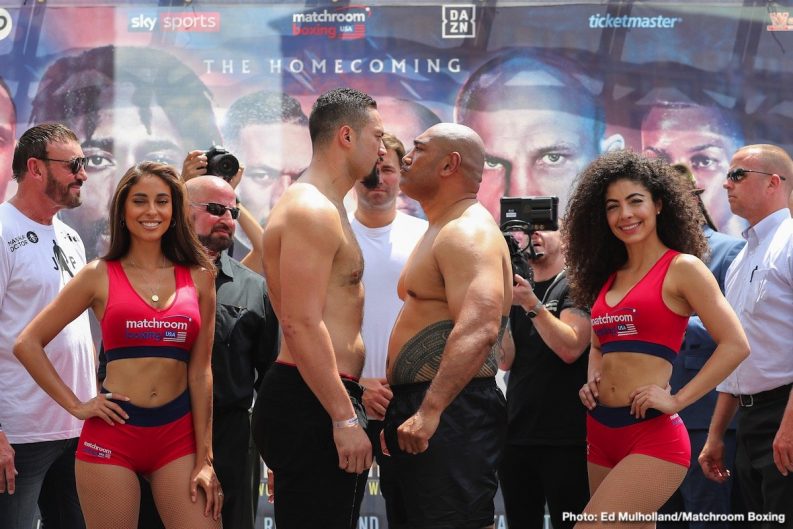 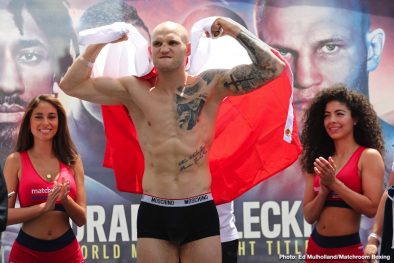 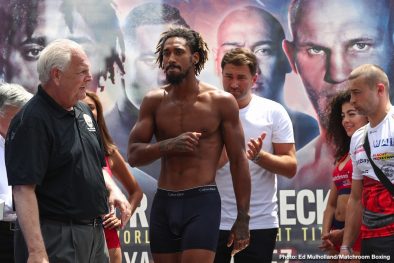 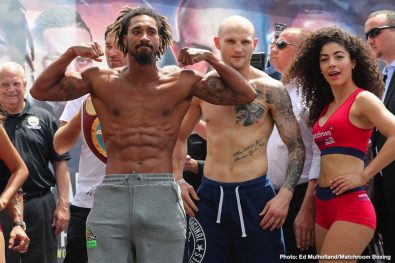 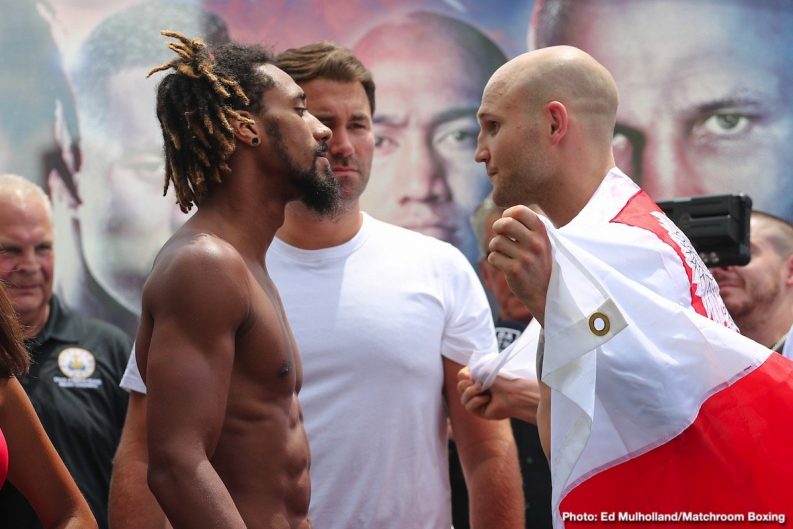 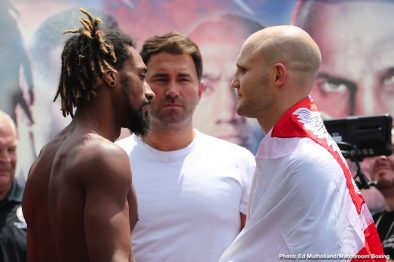 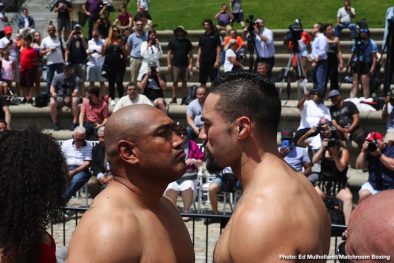 “It is a pleasure to be in Providence, Rhode Island. One thing that we have set out to do with Matchroom USA is to build fighters in their hometowns. I am still in disbelief that Demetrius has never fought in his hometown.

“Everyone keeps talking about Canelo-GGG for September. I understand that people are interested in seeing that fight again but what about Canelo against the winner of this fight for the undisputed status? That’s the biggest fight to make at middleweight.

“One thing that we have promised Andrade and his team is activity. This is his third fight in eight months, and I believe we will see a very special performance from him. In Sulecki, he brings it every single time. He is in great fights. He has a chance to thrust himself into life changing, legacy fights with a win here. He will do everything he can to beat Demetrius on Saturday night because he understands those odds.

“We have a stacked undercard here in Providence. I want to thank DAZN for making an investment in the young, promising fighters of tomorrow. They have given a platform to these young stars to build them up the right way and get the best prospects exposure early in their careers. Without DAZN, none of this is possible. They are building stars and putting on the biggest events without PPV. Joshua vs. Ruiz, Canelo vs. Jacobs – those were two great PPV level events and they deliver that to fans everywhere for a low price and in a new way.”

“It’s me again. Tall, black and handsome. On Saturday, I am going to do what I have been doing. No disrespect to Sulecki, he’s been in there with my boy Danny Jacobs and other guys I have fought. I heard Sulecki went into the hotel and put a drawing of me and it shows my head knocked off. But the last guy that did something like that, he got his ass whooped and he will get his ass whooped, too. Best of luck to all of the great fighters on the card this weekend. DAZN continues to do a great job keeping me active and getting these kids shine.

“I had my first few weeks of training out in California with Victor Conte. That went great. But hey, it’s me again and this is my show. Good luck to Sulecki, I hope he puts on a good performance then gets his ass whooped.”

“Thanks to Matchroom, Eddie Hearn, DAZN, my team, my trainer. Everyone who made this opportunity possible. It was a very good training camp. Three weeks in Poland and then seven more weeks in New York. I am ready for a very tough fight with Andrade. Before I came to the U.S., I had great respect for Andrade. But when I came here, I lost all respect for him. He just talks too much. He thinks he is as good as the other great fighters like GGG but he is not. I know one thing about him, and it’s that he doesn’t respect anyone. He is disrespectful.”

“It’s great to be in Providence with my team. The last six weeks in Vegas were great, we had a great training camp. I stayed in great shape when I was back home. Usually I blow up between camps but this time I surprised my coach a bit when I showed up in shape. I have a lot to prove and a lot to show people in the heavyweight division. I know he will come out swinging so it should be a really fun fight. But I expect to come out on top in what will be a great fight on Saturday night.”

“Thank you to Matchroom Boxing, Eddie Hearn and DAZN. I am from Australia. Joseph Parker is from New Zealand. But we are both from Samoa. That doesn’t happen every day, it doesn’t happen very often at all that two great fighters from where we are from meet in big-time fight. It will be great for us to get in the ring together. I am thrilled for this fight on Saturday night.”

“Thanks to everyone who made this possible. I had a great training camp, I am going to put my life on the line for this fight. He has never boxed anyone as quick, powerful and talented as me. He is in for a rude awakening on Saturday night.”

“I want to thank Eddie Hearn, DAZN and Matchroom Boxing. This is a long overdue title shot for me. I am coming for the title on Saturday night. I owe the Dominican Republic a title, I am not going to be robbed this time like I was in my last title shot. I am going to make this one count.”

“This is a great opportunity. I fought last weekend in London and now I am back in Providence to put on another show. It is great to share this platform with two of my buddies from the amateurs, Ray Ford and Alexis Espino, and my idol, Demetrius Andrade. My dad used to make me do homework on ‘Boo Boo’ and now I am sharing a card with him. It’s crazy and I am humbled to be here. I am excited to put on a show on Saturday night.” 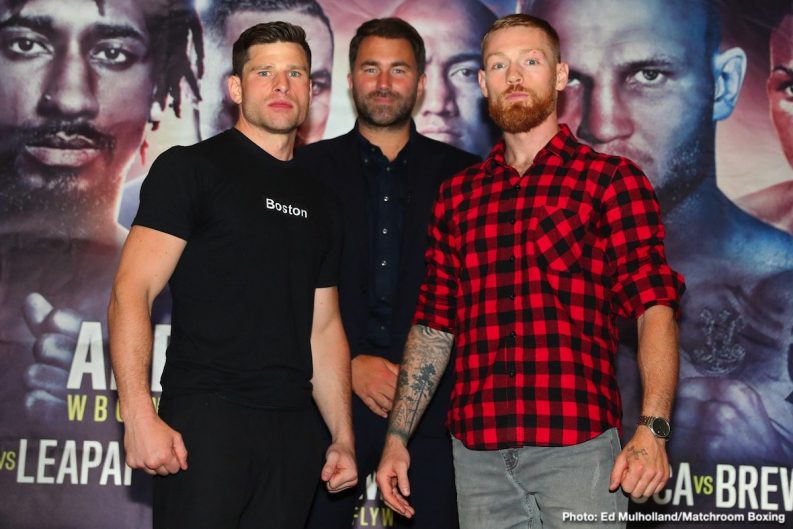 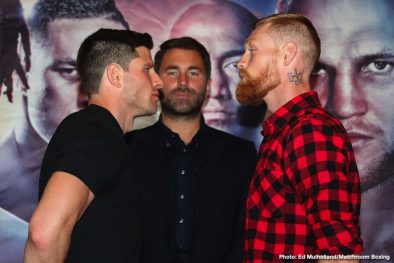 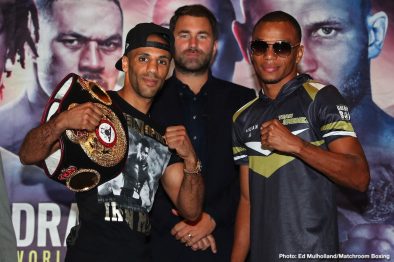 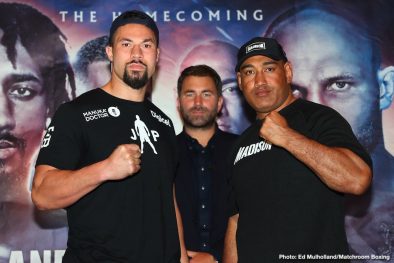 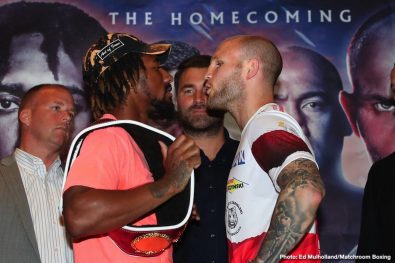 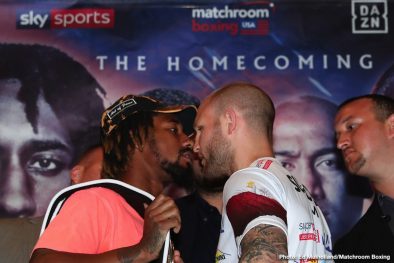 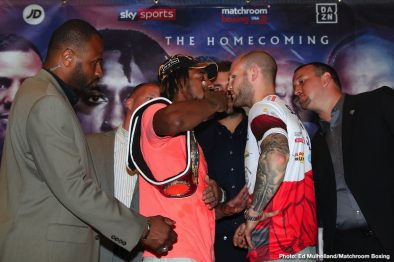 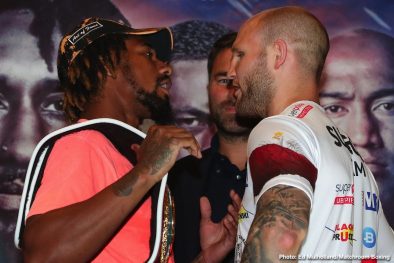 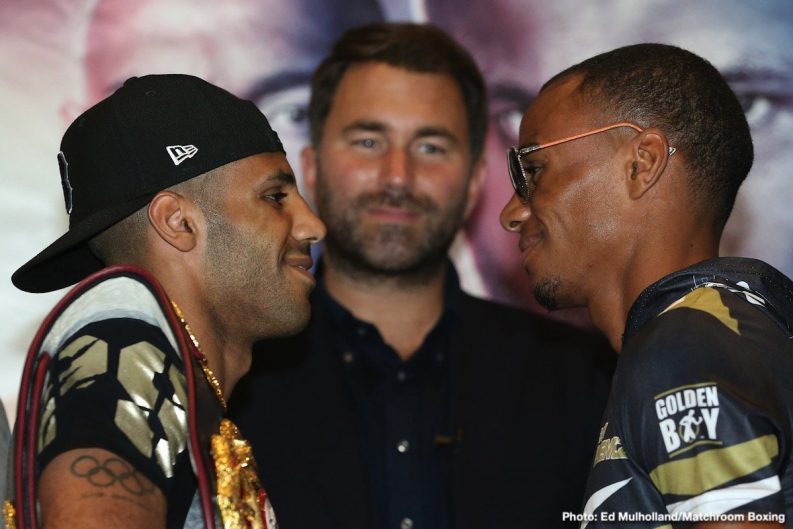 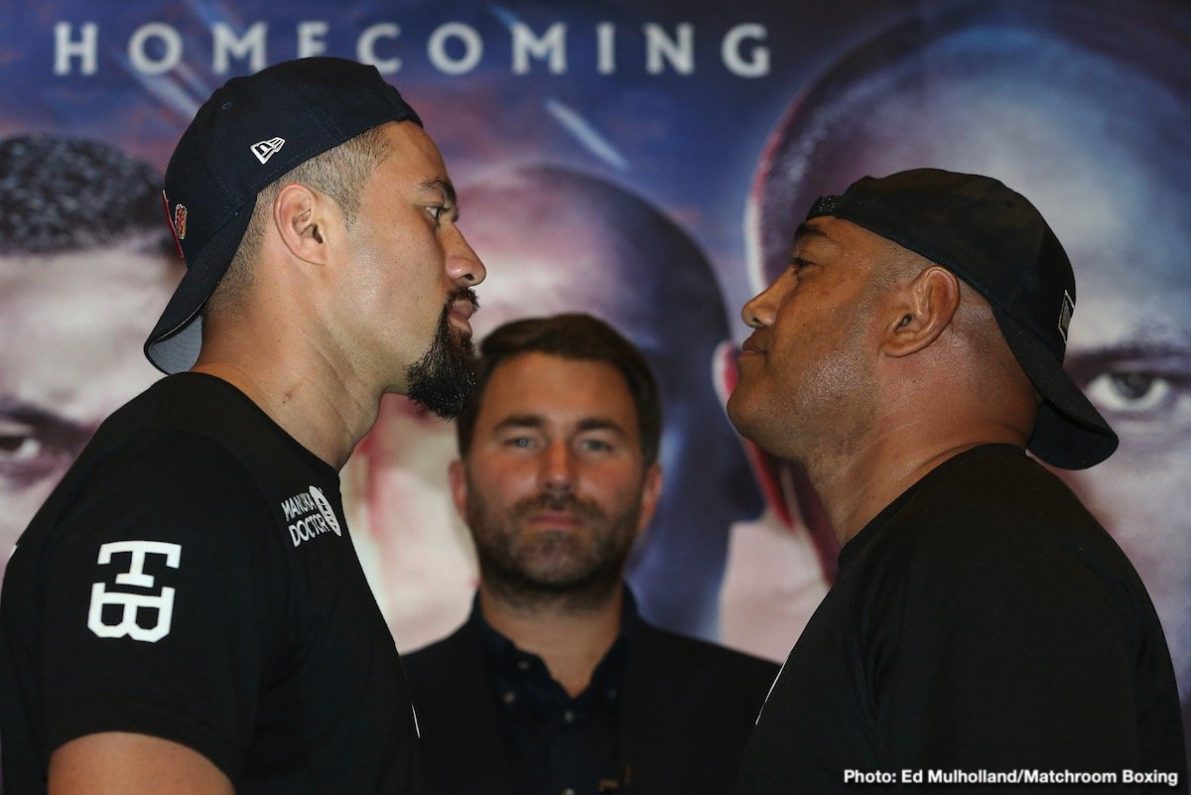