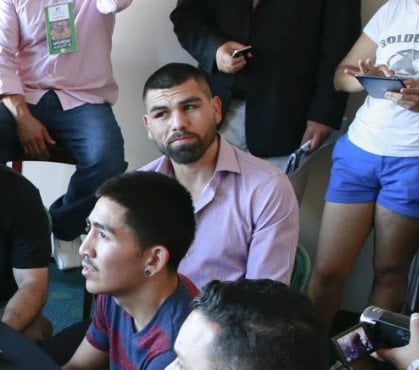 Angulo isn’t concerned about having been stopped in his last two fights against Saul “Canelo” Alvarez and Erislandy Lara. Angulo says that he’s not the same fighter who was knocked out in the 10th round by Canelo last March in a fight where Angulo looked incredibly weak.

Angulo was so weak that it was like watching some other fighter in the ring soaking up punishment against the flat-footed Canelo.

“I don’t feel any pressure at all. September 13 I’ll be a strong fighter, I’ll give the fans a great comeback,” Angulo said. “I can make 154 pounds but not comfortably. It’s time to move up to 160 pounds. I didn’t learn anything from the Canelo fight because that night I wasn’t me, I wasn’t there.”

Angulo reportedly dropped 34 pounds in getting ready for his clash against Canelo, and the weight loss, which was done in just 2 months, left him too weak for him to challenge Canelo in any way.

Even when Angulo isn’t weight drained, however, he’s slow, easy to hit and not someone good enough to beat the top fighters at 154. Lara stopped Angulo last year in the 10th round. James Kirkland scored a stoppage win over Angulo in 2011, and Kermit Cintron out-boxed Angulo as well.

You can make a strong argument that Angulo, with his consecutive knockout losses, doesn’t deserve to be on the television portion of the Mayweather-Maidana 2 card, because he’s not someone that appears to be going anyplace. Normally, the undercards that Mayweather has for his cards have talented fighters that are top tier contenders or champions. Angulo’s career seems to be heading downward rather than upward.