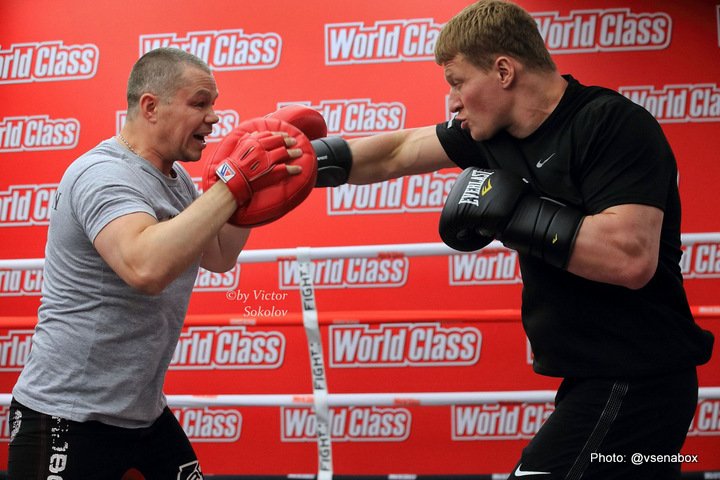 As fight fans know, Alexander Povetkin was stopped for the very first time on September 22, when WBA/IBF/WBO heavyweight ruler Anthony Joshua’s brutal punching power eventually proved to be too much for the Russian warrior, taking him out in the seventh-round of a darn good fight. It was thought by some that at age 39, the former WBA champ might think long and hard about retirement. Well, Povetkin has done his thinking, and he is not finished yet.

Taking to social media, Povetkin, 34-2(24) said how he will fight on, for at least two more bouts – the first of which he expects to take place in the UK in April (so more than likely on the under-card of AJ’s next fight, at Wembley.)

“There’s a desire so I’ll go on boxing,” Povetkin said. “My state of health is great, as is the mood. I’m not going to abandon boxing. I will have a fight, most probably in April in England, I don’t know yet with whom it will be. It is hard to say how many bouts there will be. I think it will depend on my mood, and it is the right one now. I think there will certainly be more than one or two bouts.”

So is Povetkin doing the right thing? Has he got enough left in the tank to be able to remain a major and significant force in the division? Povetkin did look good against Joshua, in those early rounds in particular, and maybe that kind of performance would be enough to take a number of top-10 fighters. Still fast, still powerful and still as tough as they come, Povetkin would perhaps be able to even contest for a world title again in the future; maybe even win another belt of some kind.

Povetkin could, in theory, face a secondary champion, like a Trevor Bryan or a Fres Oquendo (or whoever it is that defeats Oquendo in the upcoming fight for the vacant “regular” WBA strap), and look to win a version of the WBA belt he once held. A fine amateur, a world champion and a hero in his homeland, Povetkin certainly has accomplished a lot, yet he still aims for more. There could be some interesting big fights out there for Povetkin in 2019, maybe even beyond.