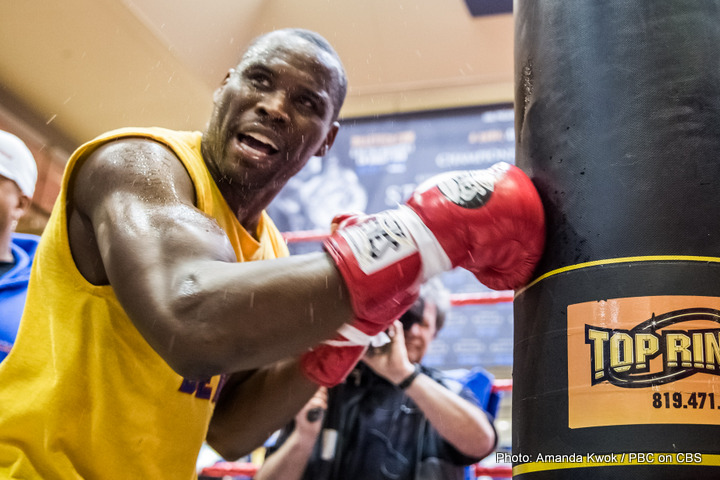 Seemingly a long time ago now, and immediately after scoring an impressive 5th round stoppage win over former champ Lucian Bute, unbeaten light-heavyweight contender Eleider Alvarez called for his earned shot at reigning WBC 175 pound champ Adonis Stevenson. Alvarez, 23-0(11) has fought once since, when he won a close decision over another former champ in Jean Pascal in June, but he has wanted to fight Stevenson, 29-1(24) so, so bad.

Now, finally, the fight seems to be on the horizon. According to a piece via ESPN.com, Yvon Michel says the fight is being targeted for December in Quebec City.

Stevenson, who crushed Andrzej Fonfara in June, in a needless return fight, faces a very interesting fight, as well as a potentially tough one, against Alvarez, and this one really is a bout that could conceivably go either way.

33 year-old Alvarez of Colombia and based in Canada, is hungry, whereas some critics say Stevenson’s best days are behind him and he is not overly interested in taking the risky fights. Looking at the southpaw champ’s last few fights, we see Stevenson’s opposition has been less than spectacular – with names like Sakio Bika (past his best and a career super-middleweight) Tommy Karpency (gutsy but well over-matched), Thomas Williams Jr. and Fonfara being taken care of. Alvarez just might present Stevenson with his toughest fight in a number of months.

Alvarez’ best win is the one over Bute, who has seen better days and was at his best down a weight class, and Alvarez has never fought anyone with the sheer power of Stevenson, but there is nothing to suggest the man known as “Storm” has a bad chin. Stevenson has enjoyed a long title reign but it could come to an end when (or if) he fights Alvarez. The fight would be a big attraction in Canada but fight fans everywhere would want to tune in.

Stevenson is often involved in good action fights (his battle with Williams Jr. was a dandy) and Alvarez has a fan-friendly style and approach of his own. Let’s hope this one finally gets signed, sealed and delivered for December.