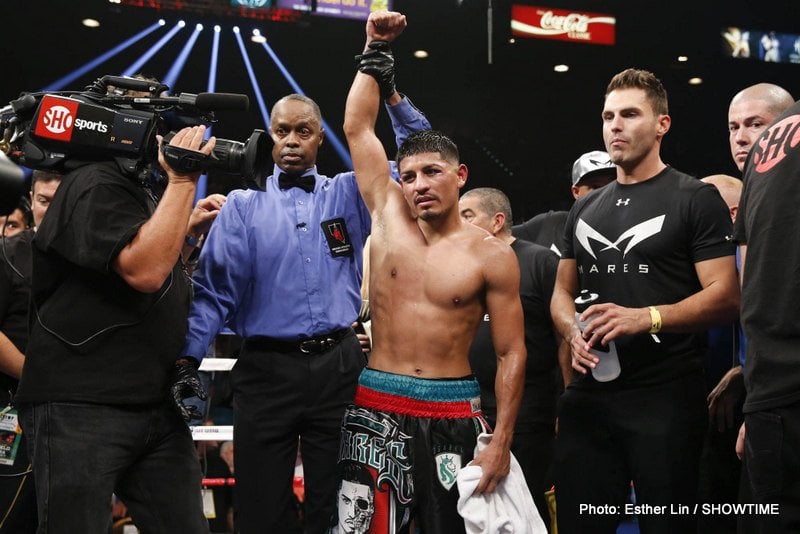 Adviser Al Haymon signed former 3 division world champ Abner Mares (27-1-1, 14 KOs) to a contract on Thursday. Mares is still trying to rebuild his career, so Haymon might be able to assist him in getting him some more tune-up fights and then eventually a world title shot.

Mares’ contract with Golden Boy Promotions reportedly expires in November, and it’s unknown at this point whether he’ll stay with them or move on to another promoter like Mayweather Promotions.

Being with Haymon doesn’t necessarily mean that Mares is going to get all the fights he desires at featherweight. Unfortunately for Mares, Top Rank has a near monopoly with them having the top fighters in the featherweight division such as Nonito Donaire, Nicholas Walters, Vasyl Lomachenko and Evgeny Gradodich.

Haymon could possibly set up a rematch between Mares and WBC featherweight champion Jhonny Gonzalez, but that might not be a good thing for Mares because Gonzalez easily knocked him out in the 1st round last year. With the kind of power and speed that Gonzalez has, Mares might be over out of class no matter how many times he’s put in with him.

Haymon would do well if he were to advise Mares to move back down to the super bantamweight division to have him try and rebuild his career at that weight rather than at featherweight where there are few fights for him. Mares didn’t look good in winning his comeback fight against Jonathan Oquendo earlier this year.

Mares boxed through most of the fight, but he still took a lot of massive shots by Oquendo. If those punches were thrown by Gonzalez, it’s quite possible that Mares would have been knocked out again.

“Any fight, Al and myself are open to,” Mares said to espn.com. “The one thing I like about Al and respect is before we made it official, we did talk to [Golden Boy Promotions] president Oscar [De La Hoya] and let him know we are working together. Oscar is open to work with us for any fight. You know me, my record speaks for itself. I’m not scared of anyone.”