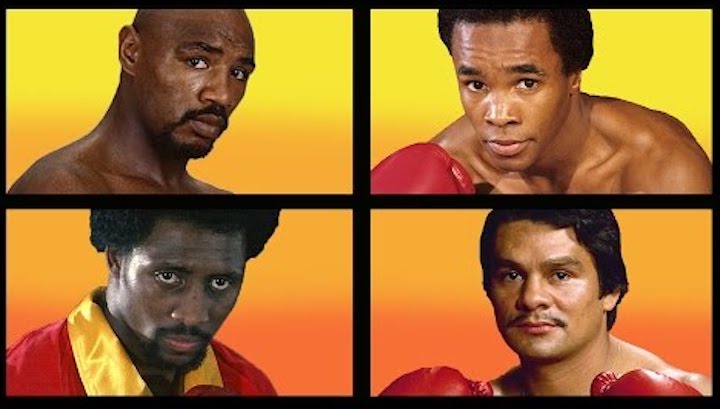 If the great Roberto Duran-Sugar Ray Leonard fight of June of 1980 wasn’t special enough, this titanic battle was the very first super-fight in the nine-fight series four legendary lower weight fighters would thril the planet with throughout the decade. Yes, in June of 1980, in Montreal Canada, “The Four Kings” were born.

Sugar Ray Leonard, Roberto Duran, Thomas Hearns and Marvelous Marvin Hagler. Four genuine, absolute, no-brainer locks for The Hall of Fame who would, time and again, risk their greatness, risk defeat, by fighting one another at least once. It was to be a celebrated time in the sport of boxing. One never to be repeated.

When it came to making the fights, no crazy demands were made by either fighter (by today’s standards anyway), money was not the primary issue, and after losing to one of the other “Four Kings,” the vanquished warrior wanted only one thing – a shot at redemption; a rematch. Nine fights in total, the epics fought across four weight divisions, with at least three of these fights up there with the very best you have ever seen in the sport. Indeed this was boxing at its best.

These were the fights, in order – and of the highest order they really were (the finale between the faded Leonard and Duran aside).

There was fierce trading, controversy, a genuine boxing mystery, violenty shuddering knockouts and beautiful boxing skills shining for all to see. Each super-fight brought something different to the last. For the best 15 round welterweight world title fight of them all see Duran’s hard-fought win over Leonard. For the three greatest rounds of all-ouit action EVER see the Hagler-Hearns war. For the finest (and the most controversial) comeback in middleweight history see Leonard W12 Hagler.

For the most shocking KO of the decade see Hearns’ utter icing of Duran. While the Hearns-Leonard II fight had more than its share of controversy and action combined. And how close did Duran – very much the odd one out of the “Four Kings” seeing how he was such the naturally smaller fighter – come to beating Hagler in their marathon?

Yeah, the great ones these four beloved fighters gave us (beloved the only accurate descriptive word when it comes to “Sugar,” “Hands of Stone,” “The Hitman” and Marvelous) really did have IT ALL.