First of all, Evander Holyfield was going to fight Mike Tyson in a mega-fight, then Tyson was arrested for alleged rape and he was later jailed. Now reigning heavyweight king Holyfield was going to defend against replacement foe Francesco Damiani, but then the Italian hurt his foot in training and pulled out. Then, finally – on this day 30 years ago – Holyfield faced a substitute’s substitute in the form of Bert Cooper. What followed was almost cataclysmic for “The Real Deal.”

Holyfield, unbeaten at 26-0, was making the second defence of the crown, yet as Cooper was unranked by the WBC, only the IBF and WBA belts held by Holyfield were on the line. To most fans and experts, it didn’t matter – Cooper had zero chance of winning. Cooper, who had once been a protege of the great Joe Frazier (hence Bert’s “Smokin’” nickname) had blown, in notorious fashion, hot and cold during his career. Losses to Reggie Gross and Carl Williams had seen Cooper lose his unbeaten record and his high ranking, while a drop down to cruiserweight saw Bert lose to Nate Miller. Then, an unmotivated Cooper was made to quit after just two rounds against George Foreman. 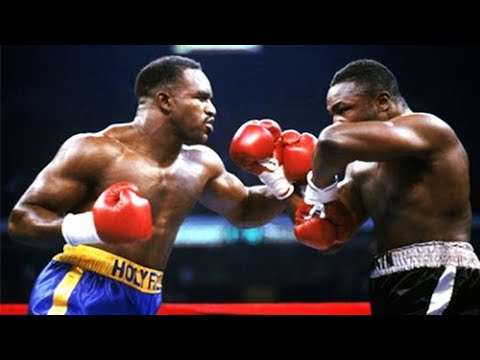 Cooper was a guy who loved the party lifestyle and it had affected his career in a big way (Frazier parted ways with him as a result of his lack of discipline). But when he was turned on, when he was serious, Cooper could fight like hell; as he did in August of 1990, when he went to war for 12 epic rounds with an unbeaten Ray Mercer. Still, when he was given the shot at Holyfield, on just six days’ notice, 25 year old Cooper was looked at as a huge outsider; even though he was coming off a decent win over Joe Hipp that October.

Holyfield – having left a lot in training camp(s), having first trained for the aggression and brutality of Tyson, then having switched tactics for boxer/mover Damiani, before then having to get ready for the aggressive Cooper (a fighter who had been compared to Tyson by some, although he was not nearly as formidable) – was somewhat burnt-out come fight night.

Having his first fight at home in Atlanta since his incredible battle with Dwight Muhammad Qawi in what was a war for the cruiserweight title, Holyfield had anything but a straightforward “Homecoming.” Instead, after a good start that saw 29 year old Holyfield deck Cooper with a left hand to the body in the very first round, Holyfield almost suffered an upset that, though not on the Buster Douglas Richter-scale, would without a doubt have been shocking.

In round-three, Cooper cracked Holyfield with a right hand to the head that wobbled the champ. Then, throwing shots in combination, Cooper seemed to knock Holyfield down. Holyfield, hurt by another right to the head, held the ropes and kept himself up. Still, referee Mills Lane ruled a knockdown and issued a count. Cooper resumed his attack, the closeness of the title forcing him on. Holyfield fought his way through the biggest crisis of his career and the two heavyweights gave fans a great action round. Holyfield had regained his composure and he belted Cooper with everything he had to get the stoppage win in round-seven. But what a price Holyfield had paid, how his reputation had suffered.

If a journeyman with a noted alcohol and drugs problem could come oh, so close to taking Holyfield out, what would Tyson do to him? This was the question on most everyone’s lips. Cooper, with a style reminiscent of Tyson’s, had “exposed” Holyfield as a heavyweight champ who was far from the real deal. Only he hadn’t. Holyfield had merely had an off-night. It happens, even to the greats. In time, Holyfield would prove his greatness; he would show how he was more than worthy of his nickname.

But what a night Bert Cooper had all those years ago. Cooper, a warrior who gave us a number of exciting fights, this when he was in proper shape and was ready to rumble, came frustratingly (for him) close to fulfilling all of his early promise and more in that sensational third-round of 30 years ago.