“A Featherweight Version Of Hagler-Hearns”

It really was a quarter of a century ago when featherweight talkers, punchers, showmen, fellow southpaws Naseem Hamed and Kevin Kelley collided less than a week before Christmas, in so doing giving fight fans a genuinely unforgettable slugfest. Hamed, known as “The Prince,” was unbeaten and he was being showered with a ton of praise, praise that referred to him as a great. This was in the UK. 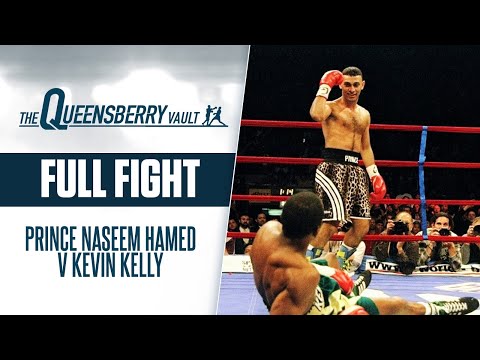 In a bid to make the American fans and critics believers, Hamed went to New York to take on “Flushing Flash” Kelley. Hamed had won the WBO and IBF featherweight titles and he was unbeaten at 28-0. But 23 year old Hamed’s best wins had come against a slightly past his best Tom Johnson, against amazing Welsh ‘Cinderella Man’ Steve Robinson and against tough Mexican warrior Manuel Medina, who had made Hamed work hard.

A win over Kelley would rank as Hamed’s best win so far, and a win over the former WBC ruler at 126 pounds would earn the British big mouth much respect.

These two fighters had circled each other for some time and now, with the fight signed, the hype was big; as was the trash-talk plentiful from both sides.

“The first round, I’m going straight for that mouth,” Kelley said when discussing his tactics ahead of the fight.

It was tasty stuff. It was thoroughly entertaining hype. How good was Hamed? How much did the 30 year old, 47-1-2 Kelley have left in the tank? This was a heck of a US debut Hamed was taking.

A sold-out Madison Square Garden crowd settled back – this after they had been treated to one astonishingly good co-feature in the form of the Kennedy McKinney-Junior Jones shoot-out – and the bombs began to fly. Kelley drew first blood, dropping Hamed, who was now holder of the WBO belt only, with a right hook that clipped the defending champion on the chin. Kelley instantly threw his hands in the air, perhaps thinking the shot had had more leverage behind it than it actually had.

Nevertheless, Hamed was down. Kelley was just getting going finding massive holes in his rival’s defensive game. Round two was incredible. Kelley, now the aggressor, landed a big left that sent Hamed spinning, his follow-up right hook bending Hamed over. In a blur, Hamed’s glove touched the mat and, as he jumped right back up, Naz was caught with another right hand and he touched down. Referee Benjy Esteves issued a count.

Hamed wore an expression that read hurt and embarrassed. But then, in typical “Prince” fashion, the visiting fighter roared back, dropping Kelley with a big right hand missile of his own. Kelley smiled as he got back up. It had been a round crammed with drama and excitement.

Round three saw both guys show mutual respect, the breath-taking action having eased down a little. It was still don’t-blink stuff, however, and Hamed’s head was being noticeably knocked back. Would the British invasion be turned away?

Round four was magic.

Kelley, guilty of throwing wildly, going for the finish that was tantalisingly close, had more success as he landed a couple of left hooks upstairs. But then Hamed countered by way of two monster lefts of his own, knocking Kelley down again. Kelley beat the count once more, this time thrusting both arms into the air in defiance having done so. Hamed poured it on, taking his turn looking for the finish that was just a punch away.

But Kelley had one more shot at the win; his right hand being of enough force to make Hamed’s glove graze the canvas. Esteves dived in and administered a count. How many knockdowns had this fight had now? Fans had no doubt lost count. Then, finally, Hamed closed the show, landing a crunching right that was followed by a swift left. Again Kelley was knocked down, and this time he was unable to beat the count. Just. It was all over, with both men having knocked the disrespect out of each other.

It was indeed, as Larry Merchant dubbed the fight, “A featherweight Hagler-Hearns.” 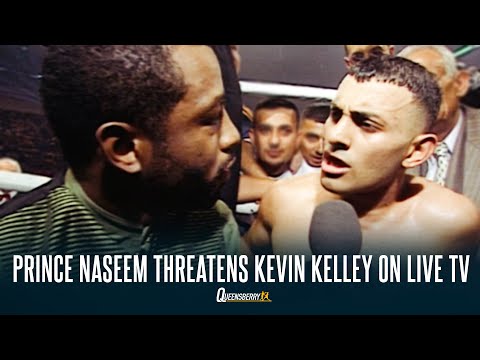