Keith ‘One Time’ Thurman says his comeback opponent will be announced shortly after Thanksgiving to return to the ring in early 2022.

Thurman says they have someone on the table for his fight, his first match since his loss to Manny Pacquiao in July 2019.

‘One Time’ Thurman had planned on returning to the ring in November or December, but he caught COVID last summer while working Manny Pacquiao’s fight against Yordenis Ugas, and that threw off his plans.

The former WBA/WBC welterweight champion Thurman (29-1, 22 KOs) just turned 33-years-old this week on November 23rd, and he wants to get a couple of tune-up fights out of the way in 2022 before challenging one of the 147-lb champs in late 2022.

Despite the long layoff, Thurman feels confident that he’ll be able to return the form that he had previously and recapture a world title within a short period.

At 33, Thurman is younger than 34-year-old WBO welterweight champion Terence Crawford and close to the same age as IBF/WBC champ Errol Spence Jr.

Thurman’s opponent to be announced

“I’m working on getting back in the ring early next year, and it’s been a long time coming for the fans, myself, and the welterweight division,” said Thurman to PBC Podcast on his comeback in 2022. 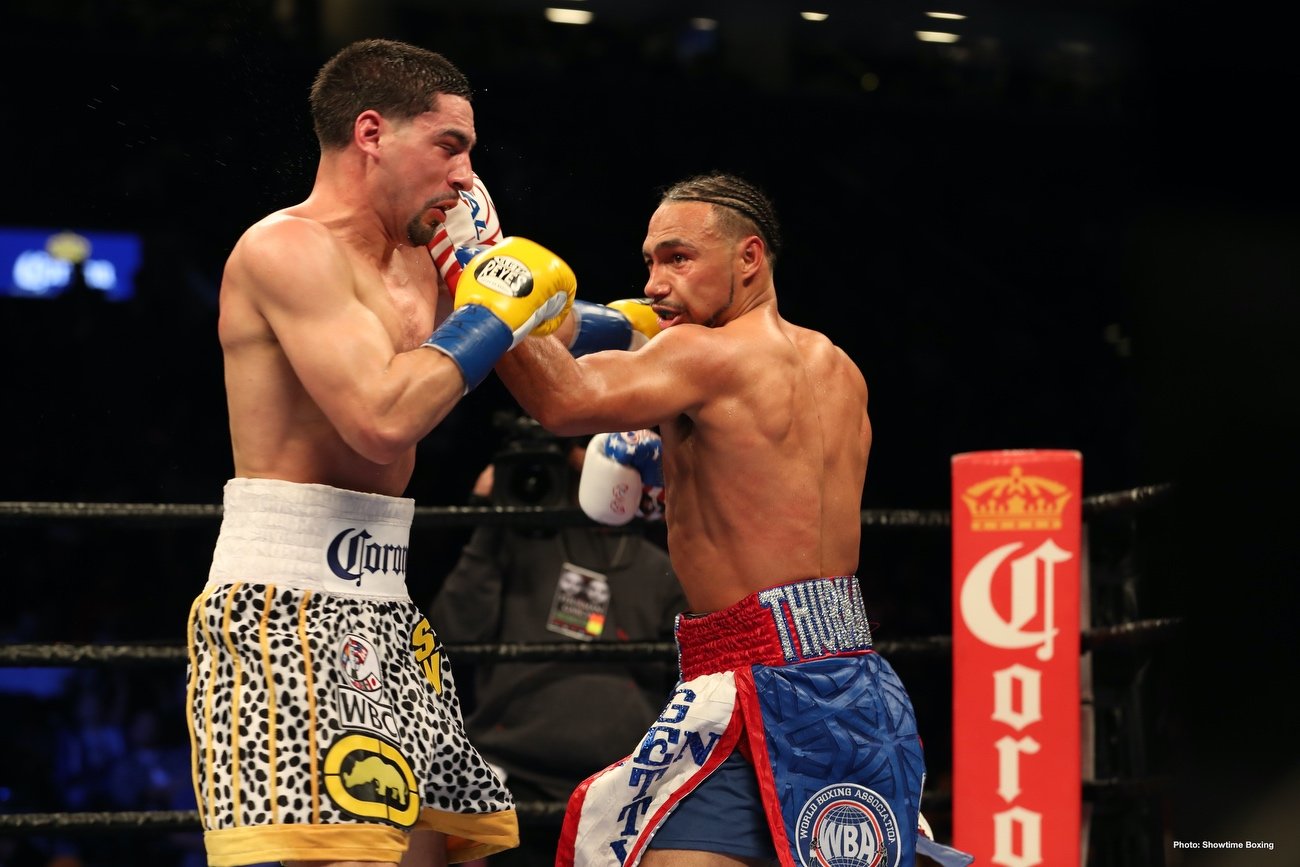 “I’m looking forward to being part of the mix and testing all these champions and climbing my way back up to champion status,” said Thurman.

“Let’s look at the numbers. I barely lost,” said Thurman about his loss to then 40-year-old Manny Pacquiao in 2019. “15 more punches, and the fight is mine—split decision with one point on the last judges’ scorecard. My instincts told me we were about to get a draw that night, and my instincts were correct in the 11th round.

“I didn’t put my foot on the gas, and he was able to walk away with the 12th round, which ultimately led to his victory and my defeat. I didn’t commit to walking away with that victory. It was very devastating.

“I have an opponent right now on the table, and we are looking forward to making an announcement most likely after this coming holiday [Thanksgiving],” said Thurman when asked if he had an opponent in mind for his return to the ring in early 2022.

“This layoff wasn’t ideal, and it wasn’t what I wanted,” said Thurman about his new three-year layoff. “I was getting prepared this year to get back for November or December,” said Thurman.

For Thurman’s sake, he needs to make sure he doesn’t fight someone a little too talented for his comeback.

He looked terrible against Josesito Lopez coming off a nearly two-year layoff in January 2019, and now Thurman has been out of the ring close to three years since his loss to Pacquiao.

“After the Pacquiao fight [against Yordenis Ugas last August] event, I was doing good with my weight management, I was in the gym, and I came home with COVID. It put me bedridden,” Thurman said.

“I’m locked down, I’m not hitting the gym, and I’m not doing anything until I tested negative. Unfortunately, that’s why I had to push it back until early next year,” said Thurman about his comeback.

“I’m looking forward to showcasing my talent once again. I’ve been in the gym, so I don’t feel like it’s the layoff that it is.

“I look forward to getting back in the ring and creating some buzz and ultimately getting some bigger fights in later 2022,” said Thurman.

“I’m not done. I have more performances in me, and I have plenty of warrior spirit. I just turned 33, and I have 33 great reasons to keep fighting.

“I want to mature in the ring. What does a mature Keith Thurman look like moving forward? To me, that’s what this next chapter is going to be all about,” said Thurman.

For Thurman to compete against the top welterweights, he’s going to need to perform a heck of a lot better than he did in his last two fights against Manny Pacquiao and Josesito Lopez.

That version of Thurman will be food for Terence Crawford, Errol Spence Jr, Jaron Ennis, or Vergil Ortiz Jr.

Terence’s win over Porter is not surprising

“Crawford did what he had to do. He had to weather the storm,” said Thurman on Terence Crawford’s victory over Shawn Porter last weekend on ESPN+ PPV.

“For everybody that understands Shawn Porter’s style, you can’t keep him from doing what he does. You just have to minimize the damage you take while he’s trying to put that onslaught on top of you.

“Crawford was capable of doing that, but it’s a fight, so he took some blows. By the time we hit the seventh round, Shawn Porter slowed down a bit. Crawford was missing a lot of punches, and I think he calmed down.

“It looked like both fighters slowed down a little bit, but with the way Crawford slowed down, he was hitting his mark and able to put some combinations together.

“The thing about Shawn is, if you keep coming in against the world class fighters round after round, you’re going to get timed.

“It wasn’t a real surprise to me that was the punch [left uppercut] was the punch of choice,” said Thurman about the shot that Crawford stopped Porter with in the tenth.

“I think Shawn was getting too comfortable jumping in and jumping in, and he didn’t feint, he didn’t set up, and he didn’t work the triple jab late in the rounds like he had in the past. Due to that reason, he was a little more predictable.

“The herky-jerky movement that he uses to offset the timing, he didn’t do that in the tenth round. Crawford took advantage of that. He’s a great closer, a great finisher, and he showed that.

“Porter got up and looked like he was capable of continuing the fight, but at that point, the fight was over. Shawn Porter would have needed a knockout to win the fight, and we’ve never seen Porter sustain that kind of punching power late in the rounds at any time in his career,” said Thurman.

Crawford looked surprisingly beatable against the 34-year-old Shawn Porter in that fight, and it’s difficult to know whether that’s age rearing its ugly head for Terence or if he was never as good some of us thought he was.

Whatever the case, Crawford is now viewed as beatable, and he’s running out of time to stay at the top of the 147-lb division.

If Thurman gets a chance to fight Crawford in 2022, it should be interesting to see what he can do against him.