Benn, 24, is so different personality-wise from his famous dad, Nigel Benn, who was an amazing talent. Nigel was always calm when talking to the media and his opponents. He didn’t lose his cool, but Conor is so different.

Unlike Nigel, Conor seems to have a real chip on his shoulder, and it’s not going to go away. It’s hard to see many similarities between the two at all other than the last name.

During the face-off, Benn scowled at Granados, trying to intimidate him with mean looks. It was interesting at Benn trying his best to put fear into the mind of Granados but not realizing that he’s been in with arguably superior fighters.

Benn vs. Granados will be fighting on the undercard of the Mauricio Lara vs. Josh Warrington 2 rematch. Hopefully, these put on a good show.

What’s important for the Benn-Granados fight is for the referee not to pull the trigger quickly if Benn throws a flurry of shots as he did in the first round against journeyman Samuel Vargas last April at the Copper Box Arena in London.

The referee Michael Alexander jumped and abruptly stopped the fight out of nowhere after Benn threw a mini-flurry with many of the punches missing their mark. If we’re going to see a repeat of that kind of stoppage tonight, Benn’s going to get dumped on by the fans.

Promoter Eddie Hearn says this is a step up for Benn from his last fight against Samuel Vargas. It’s debatable whether Granados is a true step up. If Granados fought Vargas right now, it would be a 50-50 fight. 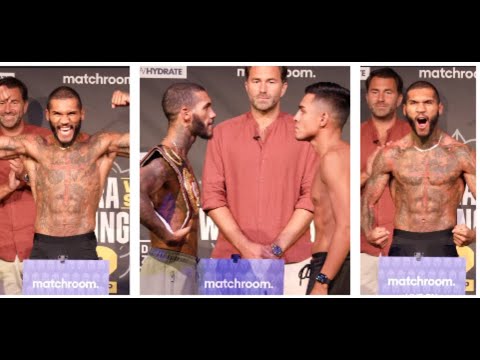 “Someone is getting laid out, and it ain’t going to be me,” said Conor Benn. “That’s for sure, and I just work hard.

“Confidence is a luxury for the hard-working. If he’s mistaking my confidence for arrogance, you ain’t running with me at three in the morning.

Granados was laughing at Conor in how overly emotional and dramatic he appeared when speaking. He sounded really corny. It might have been better if Benn chilled and said a few words instead of bragging about himself and how hard he works.

“Is was week 1 of Fight Camp, Conor [Benn] tested positive for COVID, which was terrible news at the time, but he’s past it.

“Now it’s a blessing. We’ve got the fight on this card,” said ring announcer David Diamante to Boxing Social on the Conor Benn vs. Adrian Granados fight this Saturday.

“This fight [Benn vs. Granados] could headline a card. It was going to headline Fight Camp week 1. Now this card is so stacked. Nine fights, four title fights, two world titles, one undisputed.

“This fight isn’t even the chief support, let alone the main event. That’s how good this card is. This fight is really an exciting one.

“To have fought the names that he’s fought. His win over Amir Imam was the highlight of his career that sent him on that great trajectory, and I think he wants to make that statement.

“He’s a great guy. He wants to show he’s El Tigre. Again, we’ve got Conor. He’s hitting on all cylinders. He’s popular, and why not?

“He’s popular for a reason, he’s super exciting, a great personality, and he’s never been in a boring fight. I think we’re going to see some violence in that fight,” said Diamante.