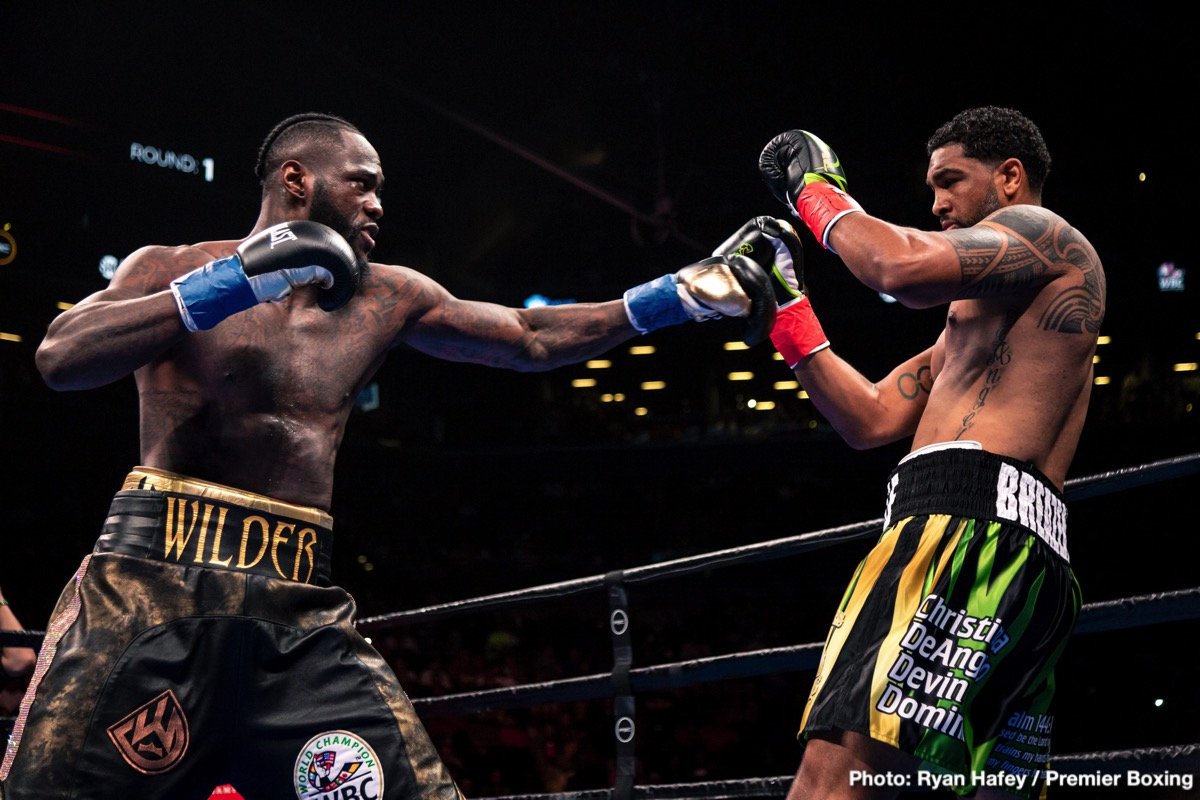 Reynoso says former WBC heavyweight champion Wilder (42-1-1, 41 KOs) would be “Dangerous” for Ruiz and would have to correct the flaws in his game before taking that fight.

With Wilder’s power, there’s an excellent chance that he’d knock Ruiz out with a single right-hand shot if he catches him cleanly the way Chris Arreola did in the second round.

The way Reynosos looked when speaking about Wilder, it seemed obvious that Ruiz (34-2, 22 KOs) won’t be fighting him next after his less than stellar performance against 40-year-old Arreola (38-7-1, 33 KOs) last Saturday night at the Dignity Health Sports Park in Carson, California.

Ruiz beat Arreola by a 12 round unanimous decision, but he was dropped from a chopping right hand in the second and visibly hurt. When Ruiz got to his feet, he staggered.

You can blame Ruiz being hurt squarely on the shoulders of Reynoso, as he was using the crouching attack that we’ve seen from Canelo Alvarez in his fights when attacking his opponents.

That style works for Canelo, but in the heavyweight division, it puts the shorter 6’2″ Ruiz at a disadvantage against taller heavyweights, who can generate a lot of power chopping down on crouching fighters.

Ruiz beat Arreola by the scores: 118-109, 118-109, 117-110. The scores were arguably inflated by a couple of points in favor of  Ruiz. It was definitely a closer fight than the set of scores turned in by the judges last Saturday.

“We got to work hard for that one,” said Reynoso to Fighthub about a fight with Deontay Wilder.

“It’s a complicated fight, and it’s dangerous. You have to work and correct mistakes.”

PBC on FOX put up a poll on their Twitter site asking fans who Ruiz should fight next. Wilder was one of the names mentioned in the poll, along with Anthony Joshua, Tyson Fury, and Dillian Whyte.

It would be great if Ruiz’s handlers chose to match him against Wilder or Whyte in his next fight, as that would show that they believe in him and want him to earn his title shot this time rather than having it given to him after a win over Alexander Dimitrenko.

Ruiz won’t be fighting Joshua or Fury next, considering those two will be tied up fighting twice in 2021. With those two off the table, it leaves Wilder and Whyte as options for Ruiz. Wilder fights for PBC as Ruiz does, so it’s a much easier fight to be made than Whyte, who is with DAZN.

Ruiz says he wants to return to the ring in the next two months, which pretty much rules out a fight against Wilder. That’s too big of a match-up to be done on two month’s notice.

For Ruiz to return to the ring in two months, it suggests that he will fight another Arreola-type fighter rather than Wilder.

Reynoso says he thinks Ruiz will be ready for his title shot after one more fight. If he’s going to take on a lesser heavyweight, that means he’s not going to be tested in a real way to earn the title shot. It’ll be given to Ruiz based on two wins over sub-level heavyweights.

Arreola hasn’t beaten a top 10 contender in 12 years. The only reason he got this fight is his name recognition rather than being a relevant heavyweight contender.

“I at least want him to have one more fight and four to five months of consistent training,” said trainer Eddy Reynoso when asked at the post-fight news conference how long before Andy Ruiz Jr will be ready to fight for a world title. “Overall, in six months, he will be ready,” said Reynoso.

“We did an exciting job and we gave the fans what they wanted to see,” said Ruiz. “I’m going to be ready to fight again in probably two months.”

If Ruiz has another poor showing in his next fight like he did against Arreola, Reynoso may be talking about wanting him to have another tune-up.