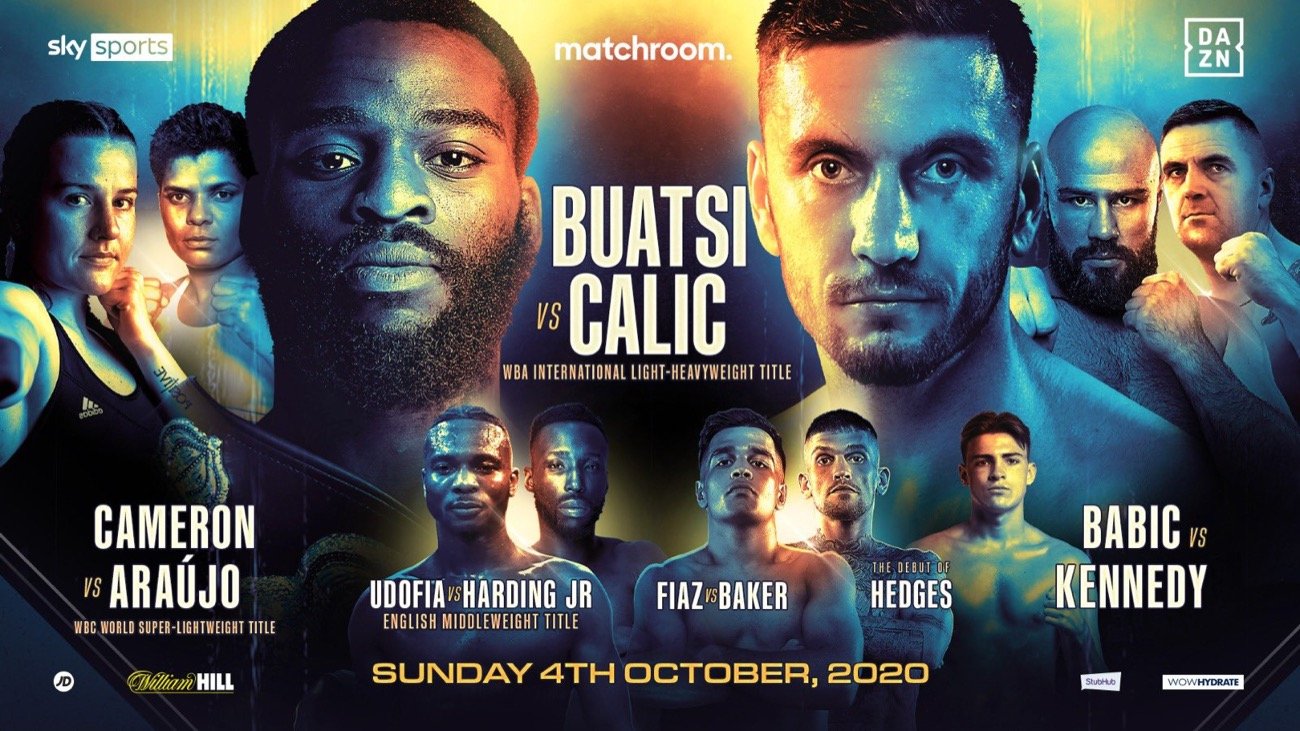 “It has been 400 days and counting, so I’m glad to be back. I’ve got a good opponent and I’m looking forward to it. I can’t wait to box on Sunday. Staying around family and loved ones has helped me through this difficult year. There’s a lot of negative stuff that has happened this year but for me it’s about looking on the positive side of things.

“I’m 27-years-old and I’ve still got years ahead of me. I’m just waiting, and an opportunity is here on Sunday. That’s all I’m thinking about right now. I’m fixed on it. What I like to do is surpass expectations. Things have happened that have stalled things. On Sunday it’s all about winning. I’d like to get out again before the end of the year.

“He’s unbeaten, he’s hungry, he wants to fight, he wants to win. I’ve got the same attitude and in those ropes I know I’m a totally different person. Right now I’m cool, I’m calm, polite. We can talk and everything, but in that ring, I know what time it is.”

“I am ready. This is like a dream come true for me. I have prepared very well. I have trained in boxing for more than 12 years. This is a big opportunity for me and I’m ready for it. My style is hit and not get hit, but we’ll see. I’m ready for anything. All of us have weaknesses. Like I have weakness and he also has weakness. We’ll find out on Sunday.

“He’s my biggest, toughest test right now in my career, but I study him, I know him since [being an] amateur, so I know he’s a very good boxer and I’ll do my best and try to win. I’m ready.”

“I think it’s perfect timing for me. I joined Jamie Moore and Nigel Travis last year and became Mandatory in two weights, and now it’s the right time to get a World Title shot.

“It’s a massive buzz in the gym, and it’s a fun gym to be a part of. You’ll see a little bit of everything from me on Sunday. I will box, be aggressive, stand there and fight, and be smart too.

“During Fight Camp the women were flying the flag, and now I’m ready to carry that on and become world champion. She’s a tough opponent and I give her credit. I’m not underestimating her, but she doesn’t beat me, it’s as simple as that.

“It will mean everything to me to become World Champion and be a dream come true. I’ll focus on Sunday and then look beyond that.”

“It’s an honour to be here again. I was here in 2012 for the Olympics and had a big party after winning the bronze medal, and now I’ll bring the World Title back to Brazil and have another party.

”I have a lot of experience as an amateur with more than 300 fights, I beat great fighters as an amateur so I believe that my experience will show. My nickname is ‘The Pitbull’, and I’m looking for blood on Sunday.”

“I have a lot of Irish fans. A lot of them messaged me: ‘Please, be good to Niall, he’s a good man’. I see that and it’s going to be hard to activate ‘The Savage,’ he’s such a nice man. I don’t want to hurt him, but I will do that in the ring, I will have to do it.

“But I’m not going to say nothing bad about him now, because I do respect him and I have a lot of respect for boxing. I don’t see him beating me, honestly. I think he’s [an] average boxer at best. It’s just my opinion. He could be much better than that. I’m going to do everything the fans want from me.”

“It was disappointing and horrible for me at the time but it is what it is. I’m a big believer in God having a bigger plan. This was his plan and we’re here now. The fight is on Sunday and it will be an exciting fight for the fans. I’m looking forward to it. Within ten days or so I was back in the gym.

“We’ve had a lot of time to work on things during lockdown, things like my timing and pacing the rounds. This fight has come at the perfect time for me. I’m more suited to higher rounds and I’m more than ready to fight over eight rounds.”

“This would be a massive win for me. I rate him highly. He’s a talented young prospect and I respect him for that, but it’s going to be a different part of the sport that he hasn’t seen yet and we’ll see if he’s up for the challenge. It’s his first step up.”

“I’m only 18 but I’ve worked my whole life for a moment like this. I’m going to grab it with both hands. In the amateurs I had 44 fights and 40 wins. I won seven International Titles and four Nationals. I went all over in the amateurs and travelled the world. I represented England numerous times. Now I’m here on the pro stage.

“The opportunity came to turn pro and I couldn’t let it slip. Mentally I’ve been ready for this since I started boxing. It has always been my dream. It has come a little bit earlier than I thought. My last win was the ABA Finals. I’m coming off a great win and I can’t wait to get started.”

“I came to this country because of boxing. It is very popular in this country. I am very settled in Manchester, I like the city. On Sunday I’m going to put on a drama show. I’m ready for it and I’m confident. John is a good fighter and experienced in the amateurs. I think it is going to be a good fight. I’m ready.”

“I can’t see this going any other way than me staying an undefeated champion. I’m really confident. I’ve been here before. I’ve been at this level for a while now. I feel like it’s time to showcase that, and what an opportunity to be on Sky Sports to show that.

“I feel like I can adapt to whatever is in front of me. If I need to box I can box, if I need to fight I can fight. I’ve seen John fight before. I’ve shared rounds with him sparring. I know what he’s about. I’m expecting the best John Harding because he’s been with top trainers.

“I didn’t really think I was going to get another opportunity to compete this year and defend my title. To be on a platform like this is absolutely fantastic. I’m going to take it with both hands. I’m just really happy to be here and have the opportunity to showcase my skills on Sunday.”

“I bring war! I don’t fear him at all. I’m going to take that title away from him this Sunday. My heart separates us. He ain’t got heart like me. He ain’t fearsome like me. He hasn’t been through what I’ve been through. He might have more experience than me in the ring, but there’s things that have happened outside of the ring that have given me so much experience.

“My heart is too big. I’m not going to back down. I’m a real champion. I know there’s going to be an opportunity for me to land, and when I do land cleanly, he’ll go down. I visualise myself stopping him and the ref waving it off.”

Matchroom Boxing has transformed the Marshall Arena at Stadium MK in Milton Keynes ahead of rising Light-Heavyweight star Joshua Buatsi’s return to the ring against Marko Calic on Sunday, shown live on Sky Sports in the UK and DAZN in the US.

The largest indoor space in the town, Marshall Arena, opened its doors in 2014 to host the National Badminton Championships. Since then, it has hosted several major sporting events, including the PDC 2020 World Matchplay and Premier League Darts.

As well as playing host to Matchroom Boxing’s latest behind closed doors event this weekend, Marshall Arena is also the home of the BetVictor Championship League Snooker for the week, with all of the action shown on Matchroom Live.

The testing of all boxers, their teams, and support staff began at the start of the week. Individuals were tested for Coronavirus before being allowed entry into the official hotel bio bubble to participate in the media events.

A state-of-the-art media zone has been built onsite where fighters on the card will undergo their media obligations, including today’s media session, tomorrow’s press conference chaired by promoter Eddie Hearn and Saturday’s weigh-in.

Fighters can put the finishing touches to their training camps in the boxing gym that has been constructed on the hotel’s site. The gym includes a boxing ring, heavy bag, speedball, stretching area, and cardio equipment.

“After the success of Fight Camp, we needed a blank canvas to create a creative solution to boxing behind closed doors,” said Promoter Eddie Hearn. “The Marshall Arena and the Stadium MK facilities have proved perfect across our PDC Darts, and World Snooker events, and I’m excited for fight fans to see our efforts this week and particularly Sunday night.”