Billy Joe Saunders is still upbeat about the coronavirus spoiling his plans on facing Canelo Alvarez on May 2 and he thinks he might have a curse on him. Although there’s still a chance for WBO super middleweight champion Saunders (29-0, 14 KOs) and WBA ‘regular’ champ Canelo Alvarez (53-1-2, 36 KOs) to fight in June, July or August, according to Hearn, it’s not looking good right now due to the coronavirus sidelining all sports including boxing.

Canelo will be fighting at some point in 2020 as long as he’s given the go-ahead by the State Commission in Nevada. However, he reportedly has agreed to terms to fight Gennadiy Golovkin on September 12.

The worry for Saunders is if his fight with Canelo is postponed beyond July, it’ll likely be postponed until late 2020 or next year. Canelo would then take on Golovkin in September, which is the fight that everyone wants to see. The UK boxing fans are interested in seeing Canelo fight Saunders, but the U.S boxing population wants to see Canelo vs. GGG III.

Hearn: “This is a frustrating time right now obviously,” said Hearn to Saunders on his Instagram Live on Monday. “You were locked in with Alvarez for May the 2nd. You flew to Vegas and we were about to have a press conference this week. What’s it been like for you the last couple of weeks out there [in Las Vegas]?”

Saunders: “Everything happens for a reason. You got to take it on the chin. The main thing is I put myself in a good position to go back into camp again, so I will be maintaining that. So maybe it’s done me a favor or maybe it hasn’t.

“I’m super in front of where I need to be with seven weeks to go when I obviously got the news. These big fights, it’s like I’ve got this curse on me when they come something happens. It’s one of them. We all know it’ll happen, so all I can be is fit ready. As you said the ones that are fit and ready to go will be up first. So I’m ready.

“The Top Rank gym was a nice place there. It was isolated. It’s a shame really because the buzz was just coming around the camp. Josh’s fight, my fight, feeding off each other. We were both super fit.

“We can’t control what’s gone on. It’s obviously one of those things that we have to get on with, and moving forward. The important thing is I stay in shape and be ready when I get the call,” said Saunders.

The timing for the coronavirus pandemic to hit couldn’t have come at the worst moment in Saunders’ career. He’s been working hard for a long time to try and get a huge money fight against Canelo or Golovkin, and now that he finally has that match, it’s potentially going to be erased by the coronavirus. 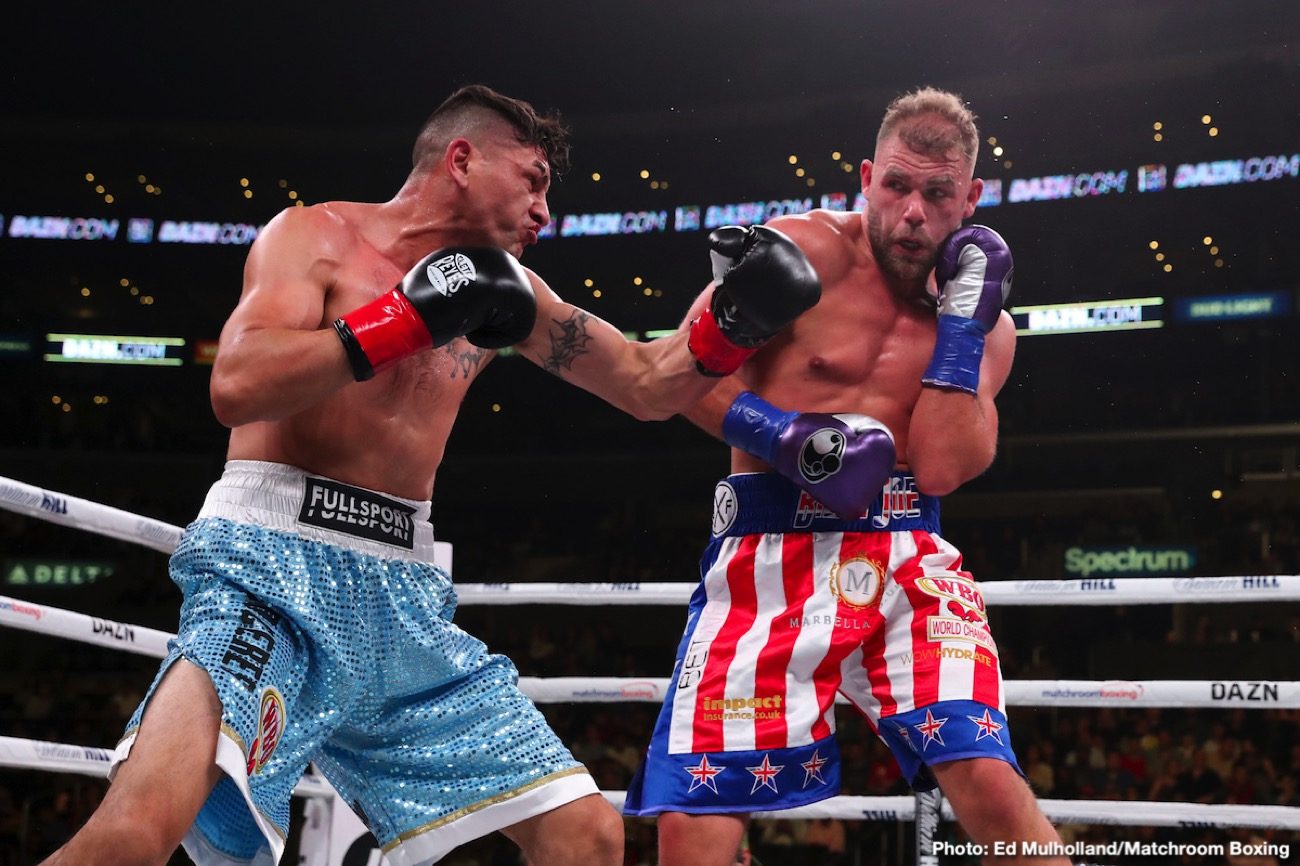 Hearn: “When you talk about Canelo Alvarez, a lot of people’s pound-for-pound #1, how highly do you rate and why do you think you beat him?”

Saunders: “I rate him [Canelo] as the best pound-for-pound at the moment. I rate him like that because I have to in my own head because I’m not going in there for the money.

“We’re in it for the money, but for me if they say, ‘You’re definitely going to win, but you’re not going to have a penny, I’d say, “Yes, let’s do that.’ So for me, it’s all about winning. I really do rate him.

“I believe on my night, as long as everything is bang on right for me, I believe I’ve got the beating of Canelo Alvarez. He’s a brilliant champion. You have to beat the best to be the best,” said Saunders.

It’s interesting that Saunders is implying that Canelo has already reached the zenith of his career because a lot of boxing fans believe he’s still getting better. Canelo barely beat Daniel Jacobs, and you can’t count Sergey Kovalev and Rocky Fielding because they were both so poor. Kovalev used to be a good fighter, but he looked completely shot against Anthony Yarde and Canelo.

“I know that you had a good fight with John Ryder and that you rate John Ryder really highly as well. A lot of people think that Callum didn’t perform well in that fight or was that just a case that John Ryder is underrated,” said Hearn.

Saunders: “I think a lot of people look at John Ryder and think, ‘He’s not particularly good,’ but I’ve shared the ring with John Ryder, and he probably gave me one of the hardest nights I’ve had. So both coming into it unbeaten, we didn’t know what it was like to lose.

“So I pushed that extra mile a little bit more than anyone else, and I got a little bit more experience. I believe that John Ryder is a really good fighter, and he’d give anybody in the division an absolute good fight. He always comes to fight. He’ll have a boxing match with you. I sparred him when I was boxing Willie Monroe. He came in every day and gave it his all, and I respected him for that.

“I believe it [Callum Smith vs. Rynder] was a close, close fight. John Ryder could have gotten the nod, but you couldn’t really complain. He was probably one or two ahead. But Callum Smith is also a great fighter, and I believe if Canelo didn’t happen, it would be me or him. It’s the only fight that makes sense for UK fans, whether that’s at Anfield or York Hall,” said Saunders.

Ryder did a good job of exposing Callum Smith last November. Boxing fans think that Ryder isn’t a great fighter. He just showed that Callum isn’t either, and highlighted his many flaws. Callum is just a slightly better version of his brother Liam Smith. 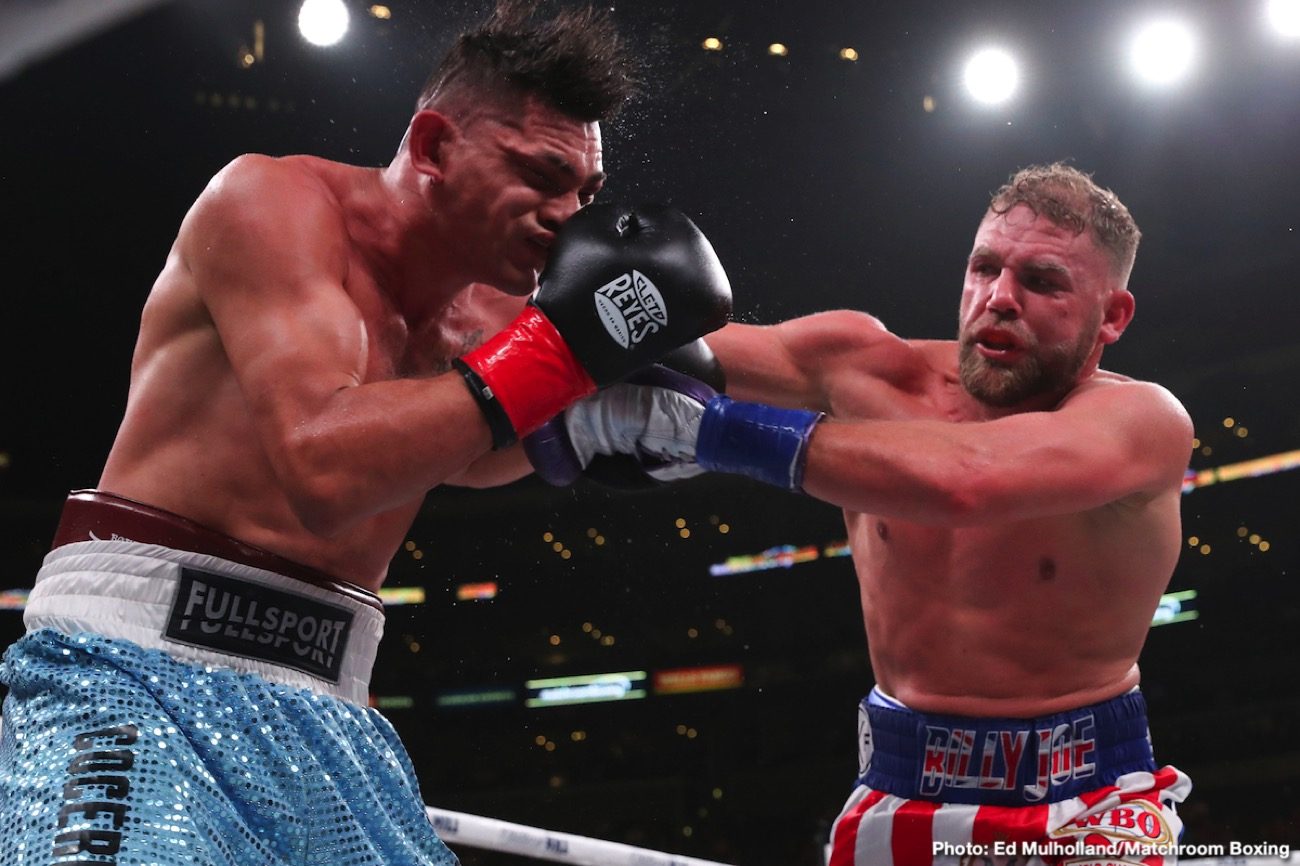 Saunders: “Yeah, the thing is I think all these good fighters are squeezing out to 160. Danny Jacobs was struggling to hold the weight. Golovkin is the more 160-suited at the moment at that weight than anyone in the division. I think everyone now is smoothing into 168. I can make 160, especially now at this stage of the camp where I’ve put myself. I can make that weight quite comfortably,” said Saunders.
Hearn: “Obviously when the big heavyweight fight happens later this year when I take 50 grand off you when Anthony Joshua beats Tyson Fury. We’re still on for that, aren’t we?”

Saunders: “If you would, I don’t know if you would want to up it a bit now. I think you and I know now. First of all, what I have to say about what Anthony Joshua has done for British boxing from 2012 where he’s put it, you have to take your hat off to him. Selling out those stadiums with 80 and 90,000.

For him to do that, and now he’s catching the imagination of the British public. Tyson Fury is right behind him, and he’s conquered America. It’s going to be an unbelievable fight, and I don’t think there’s anyone that can catch Tyson, not at any weight,” said Saunders.

It would be a good idea for Saunders to return to the middleweight division at some point because he doesn’t have the size to compete with the bigger guys. David Benavidez and Caleb Plant would give Saunders a lot of difficulties.

Saunders not sure how good Canelo’s trainer is

Hearn: “Well, I’m up for upping that bet when it’s on. When we make that fight, you and I will discuss and increase in numbers. To be fair, if you get the Canelo Alvarez fight and beat him, you’re probably going to want to put down a couple of million on it,” said Hearn.

Saunders: “Eddie, that’s what I got [a small camper] because the Alvarez fight ain’t happening.”

Hearn: “How much does that go for?”

Saunders: “For you, I’ll negotiate a price and sell it to you. I wouldn’t sell it to anybody else. Only you.”

Saunders: “You know what I mean? Nobody else in the world could buy that, and I’d deliver it.”

Hearn: “I’m definitely going to give you my address, mate. You’re not subject to a wind-up. When I got on the plane with you, and I didn’t even know you that well at the time. When we flew back, I was thinking, ‘I’m so tired, but I know if I go to sleep, the minute I go to sleep, Saunders will be up sticking something on me.

I think Eddy Reynoso is a good trainer.”

Saunders: “He [Reynoso] can’t speak a lot of English so we don’t know what he’s saying. They do good meat out there [Mexico] as well.”

Hearn: “So that’s another thing. Obviously, because we don’t know what he’s [Reynoso]  saying to us, so we don’t know if he’s any good. Well, we don’t.”

Saunders: “We’ll see how good he is when I box Canelo. The only thing we can do right now respects this virus that’s going around now. I see a lot of people out in the street. I see a load of people out there,” said Saunders.

Billy Joe and Hearn being up a good point about not knowing how good Canelo’s trainer Eddy Reynoso is. When you look at how much Canelo improved after fighting Floyd Mayweather Jr., it’s clear that he learns from experience and from watching different fighters. That’s not Reynoso.

Canelo is incredibly good at learning from watching other fighters. Muhammad Ali was the same way. He learned from watching Sugar Ray Robinson fight. Although Ali had a good trainer in Angelo Dundee, he taught himself how to fight by observation and fighting good opposition in the gym and in the amateurs. 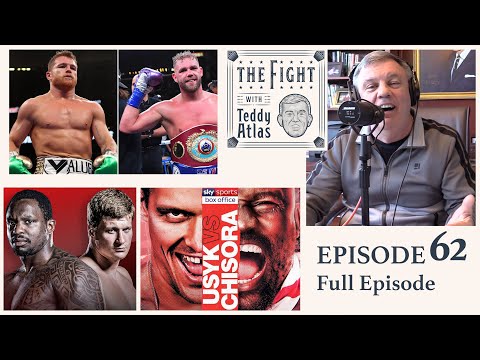