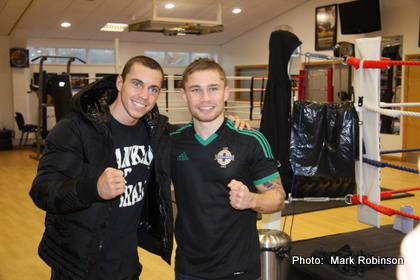 Scott Quigg is set to return reiterating once more that he is willing to fight Carl Frampton anywhere to get the fight on everyone’s lips made.

The reigning WBA super-bantamweight champion recently required surgery on a hand injury sustained in the 9th round of his title defence against Hidenori Otake in November.

The procedure was a success and two weeks out from being allowed to uncork his right hand again, Quigg, 30-0-2 (22KO’s), has told FKSports he is gunning for IBF champion Frampton, 19-0 (13KO’s).

“Carl is a great fighter and I respect him, but it’s a fight that has to happen and I know I will beat him when the time comes.” He said.

It remains to be seen when that time is, negotiations have proved problematic from the beginning. Both fighters belong to rival promotional companies, perform on different television platforms and command a solid fan base at home.

So, the motivation to give ground is less than tempting.

Similar story I know, but where there’s a will there’s a way and certainly for Quigg there is a strong will in everything he does.

“I would go to Belfast no problem. If the fight was outdoors in Belfast and there were thousands of fans booing me, that would only make me hungrier. I wouldn’t be intimidated. To beat him in his backyard would be even better.” Quigg said.

Such is Quigg’s unflinching confidence you have no choice but to believe his assertions that he would travel to Belfast without a second thought.

He may just have to, but not without the guarantee of an immediate rematch in Manchester agreed first. This would be similar to the Froch v Bute arrangement organised by Matchroom, which Quigg confirmed is a distinct possibility if this fight is to be made down the line.

“The best solution would be a two fight deal, one fight in Manchester and one in Belfast.” He said. “Wherever Frampton decides to get in the ring, I will take him out.” He added.

Prior to any unification bout Carl Frampton faces a difficult assignment against the brash American Chris Avalos, 25-2 (19KO’s) on 28th February in his native Belfast.

Quigg knows the American well having sparred him on two separate occasions while visiting Freddie Roach’s Wild Card gym in 2009 & 2012.

“I had the better of him twice and he struggled with my body shots, according to his Dad anyway.” Quigg revealed.

“He is a character and has made himself harder to hit in his last few fights and that will help against Frampton. He put in his best performance when he won his eliminator in China (Avalos won TKO8 over Yashutaka Ishimoto). I think it will be a tough fight, but Frampton will edge it for me.” The 26-year old concluded.

Quigg will no doubt watch on with envious eyes when Frampton and Avalos clash, such is his love for the sport and passion for training and competition.

Indeed, keeping the boxing fanatic away from the gym was a task in itself.

Undeterred by his injury he turned what could have been a setback into a positive. He realigned his training program to a softer approach early on in his rehabilitation, using the time to work on his technique and reflect on previous fights in a relaxed frame of mind, which he confirmed allowed him to see more and identify areas for improvement better.

It’s typical of Quigg, whose need for improvement is incessant between fights.

His attitude towards training is famed and the soft approach lasted just 4 weeks before he began to crave that competitive edge he needs to strive on.

He points to his work with Ric Moylan, his strength and conditioning coach, as an instrumental factor in his continued improvement through what could have been a difficult period.

“I have been training alongside professional tennis player Liam Broady improving my footwork and keeping my weight down. Training alongside an elite athlete like Liam has helped bring that competitive edge I miss when I am not in the gym. I need that edge all the time, even on the track with the lads I refuse to be beaten. Everything has to be full on if you want to be the best.”

It’s that attention to detail that makes Quigg and other World champions what they are and something that he promises to continue. He will keep demanding more from himself and his team to be the best he can possibly be.

What’s clear is he fears no one in the 122lbs division and is ready to take on all comers and make 2015 his own.

“I will fight anyone next, Frampton, Santa Cruz, Rigondeaux anyone.” He said. “I want to fight the best.”