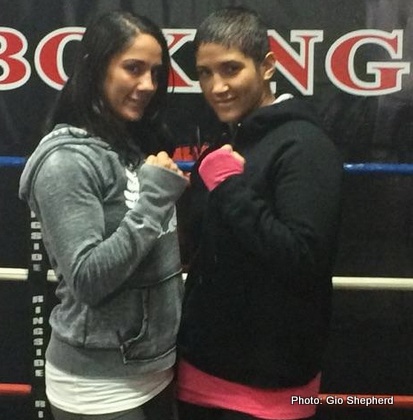 Recently, I had the pleasure to sit down with the boxing stars Cindy and Amanda Serrano at their home turf, Gym X, where they spend countless hours honing their craft.

I found them to be engaging, quick witted and passionate about their own personal stories. Lastly, as the ladies would later point out being blessed with good looks doesn’t hurt either.

How much of a mark the sisters can stamp out to help propel female boxing into the mainstream remains uncertain. One thing that is certain, this duo has the talent, growing fan base and the “it factor charm”, making them a very marketable package in and out of the ring.

MC: I’m here with the Serrano Sisters, Cindy and Amanda, how are you ladies doing today?

MC: I know you ladies have been busy in and out of the ring. First tell us what you have been up to outside the ring?

AS: We have been doing a lot of appearances and motivational speaking. We also have a magazine called Body N Style. This was our first year with it. We fulfilled all six issues and it’s a great accomplishment.

CS: It comes out every other month. For us it’s something different and challenging. It’s been a big success. We’ve met many artist and entrepreneurs (A segment dedicated to introducing them)

AS: We’re trying to get up and coming individual’s stories out there.

MC: How did the magazine come about?

AS: Our manager (Jordan Maldonado) decided we needed more exposure. TV, radio and print, are the best way, so he wanted to have control to help us achieve that.

CS: It was a spur of the moment thing, nothing we talked about or planned. It was like one day he fell asleep, woke up and said we’re doing a magazine. We were like you are crazy. We both laughed in his face. One year later it’s doing awesome. We have Lots of sponsors. He (Jordan) looks at me now and says I told you (LOL).

MC: I know you both recently had victories in the ring.

AS: Yes, my victory was a little personal. I fought and won the WIBA title a while ago, which is a crappy organization. (I later found out) after winning the title, I threw it in the garbage. The president of the WIBA Ryan Wissow, is very disrespectful towards women.

CS: (cutting in) and he runs an all women organization!

AS: The girl I fought, Carla Torres picked up the title out of the garbage and became his champion. I just wanted to show Ryan that her and I were two different class fighters. I am an A class fighter and she is a D- fighter. I showed him the different types of champions. It took me 59 seconds to show that. That fight was dedicated to the WIBA.

MC: and Cindy your fight?

CS: Oh my fight. It sucks to fight right after Amanda. All the pressure is on me for a KO. I’m the boxer, so usually my fights go the distance. My last fight was in the Dominica Republic and as I was sitting getting my hands wrapped, a couple of gentlemen came up and said I saw your sister fight in NY…. and then I’m like (expletive). I thought I got away from fighting in her shadow. LOL but I dug deep and got the 1st RD KO just 19 seconds later than she did YAYYY!!!!!

MC: Let me get your take on this. I know you both love the sport. It’s gotten you a lot of opportunities outside the ring, but do you ever wonder what it would be like fighting at this level if you were men?

AS: I tell my trainer all the time that I wish I was a man especially with my record, credentials and being a 3 time 3 division world champion. The opportunities that men get…. but because I’m a girl I don’t make close to what they make. It’s sad sometimes and it gets you down. We do the same work but we don’t get the same recognition. It sucks but we do it for the love of the sport.

MC: If you had a message for promoters out there: why should the Serrano sisters be on their next card?

AS: I’ll just tell them watch our fights. Just give us an opportunity. Put us on a card and watch. We guarantee we will put butts in the seats.

CS:I believe every card should have a female fight on it. Women fight with heart. We sell tickets. Like she said we put butts in the seats and we are pretty.

CS + AS: We would definitely steal the show.

MC: Where do you guys see yourselves in 3-5 years?

AS: Hopefully retired. I want to retire by 30 I’ve been in the sport since 18. I’ve already accomplished everything a fighter can. I was an amateur champion, won the Golden Gloves, 3 time 3 Division World Champion. Now it’s just about getting the big fights and fighting the fellow champions. I still want to be involved in boxing once I retire.

CS: You’ll laugh but I’ll probably be like 700lbs. Boxing has been my life. I’m currently the UBF Lightweight champion and ultimately I will like to gain one of the major titles. It’s in my blood. I took three years off but came back. It’s one of those things where you can leave but never really leave. We run the gym, do personal training and maybe one day I’ll train a fighter.

MC: Lastly, what do you want to tell the fans?

AS: First off we want to thank our wonderful team- our managers Jordan Maldonado, Jorge Rivera, wife Joann Rivera and Sarah Fina, our advisor David Schuster, all of our sponsors (Andrew Udis ). Promoter & great friend Michael Duzant. Last but never the least our family friends and fans, you guys push us to be the best. Love Ya!

CS: One day you’ll see the Serrano Sisters, whether in the ring headlining or fighting each other. Greatness will NOT be denied!!!!!

Special thanks to Jordan Maldonado , Jorge Rivera and Gio Shepherd