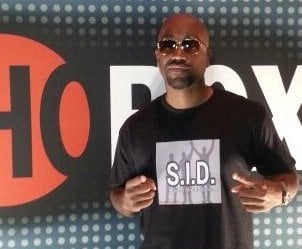 Eastside recently caught up with boxing aficionado and trainer Stephen “Breadman” Edwards. “Breadman,” as he is known throughout boxing circles, gave Eastside Boxing an exclusive on his moniker, how he got into the fight scene, and shares information about his current pupil, hot rising prospect Julian “JRock” Williams.

ESB: Stephen Edwards aka “Breadman,” you’ve been in the fight scene for quite some time now. Tell the fans what got you into the fight game and what it is you do.

Bread: I have always been just a boxing guy. I boxed recreationally after suffering a knee injury while attending high school. In high school, I was primarily a basketball player.

I never turned pro or fought amateur, but I just loved the contact and I excelled in the gym, boxing hundreds and hundreds of rounds. Later on, I became acquainted with Greg Leon and we became friends. We started doing boxing business together and I started writing my own mailbags. I actually became a partner in the company for a few years and it was a great experience. So I would say my mailbag actually got me my start in the game.

ESB: Your moniker is “Breadman,” how did that come about?

Bread: My nickname used to be “Cornbread.” I was a pretty good basketball player and there was a movie called Cornbread, Earl and Me from back in the day, it was about a high school basketball player. So, as I got older, people cut the corn off and kept the Bread. Then, I became known for winning money on sports gambling so it kind of stuck.

ESB: I initially heard about you through the grapevine for selecting winners in fights and slowly saw more of you in fighter’s corners, etc. I must say your picks are 90% dead on. What is it that allows you to see “something” that others simply do not? As far as do you watch much video on fighters, know people in camps, etc. in order for you to be able to place such accurate picks.

Bread: When I am interested in something, my memory becomes photographic. I can remember different sequences that lead up to certain things. I can remember what side of the ring certain fighters were on when they scored knockouts. I’m humble about it, but it could be a gift so really who knows. My grandpop would tease me because I can remember weird things about fighters.

As far as me picking fights, I just gather information and I try to be objective. Some people pick with their hearts and I never do. Even if I’m involved with a fighter, I never pick from the heart. If you have the “eye” and you are objective, then it’s not too hard to get most of the fights correct. I’m pretty good, but I’m not 90%. 90% is awesome but I don’t know anyone that good. I would say I am much closer to 80%.

ESB: Your currently the trainer for Julian “JRock” Williams, a nice up & coming junior middleweight making a lot of noise inside and outside the ring. What made you want to work with JRock?

Answer: I knew Julian since 2007. He wanted to turn pro in 2009 but things didn’t work out for him as far as getting signed. So, I was asked to come on board to help him get signed and get fights. So, I started going to the gym to watch him train and I noticed that he had format or resources. I couldn’t believe he was as accomplished as he was with how he was training. He never did any pad work, he didn’t have any idea of how to do his roadwork. All he basically did was spar and sometimes hit the heavy bag. He also had no idea of how to diet correctly. So I realized he had a huge upside and that is when we just sort of started working together, with me as an advisor/trainer. There was no actual day where we made it official, it just sort of happened on its own.

ESB: Julian recently fought and gained a nice decision over undefeated prospect Eliezer Gonzalez. What’s on the horizon for Mr. Williams in terms of his next bout, opponent, location, etc.

Bread: Al Haymon told me Julian would be fighting again in December. I have heard rumors about several opponents with Jesus Soto-Karass being one of them but as far as I know, nothing is official just yet. So, I’m waiting on the word right now.

ESB: Any other fighters you currently with or hoping to work with?

Answer: I train Kyrone “Shut It Down” Davis who is a 5-0 middleweight out of Wilmington, Delaware. I advise Steven Upsher Chambers who is 24-4, Omar Douglas who is 12-0 and Naim Nelson who is 12-0.

ESB: A lot of people give the influential advisor Al Haymon a great deal of flack for various reasons, some of which Im sure you’ve heard. What can you tell us about him and the relationship you have with him considering he is the “advisor” for JRock Williams.

Bread: People on the outside give Al Haymon a great deal of flack but not the people who work with him. JRock Is the first fighter I ever brought to Haymon. We were with Gary Shaw for 2 years before that and without disrespecting Gary Shaw, I can tell you that working with Haymon is much better for us.

Julian has taken risk but he has been compensated for those risks. I have lots of input on his opponents. They keep us busy. Haymon is not an easy person to get in contact with but he was one of the first people to call Julian when his mother passed away last year.

I understand the business of boxing and I know relationships can change with a win or loss. But thus far from our personal experience, Haymon has been great to work with. All the rumors about him babying fighters does not apply to us. He lets us rumble if we want to rumble. The proof is in the pudding as Julian does not fight turkeys.

ESB: Well Breadman, I want to thank you very much for taking time out of your hectic schedule to give boxing247.com some time and we look forward to more mailbags/picks in the future from you. For those who would like to keep in touch, how can fans follow you? (twitter, facebook, etc.)