Philadelphia, PA—Streaking junior lightweight contender Tevin Farmer, of North Philadelphia, and Orlando Rizo, of Managua, Nicaragua, will meet in a scheduled eight-round contest Friday evening, Oct. 14, at the 2300 Arena in South Philadelphia. First of eight fights is at 7 p.m.

The Farmer-Rizo bout is a major added attraction to the card which already features junior middleweight Tyrone Brunson, of North Philadelphia, against Ismael “Tito” Garcia, of Vineland, NJ, in an eight-round match.

Hot junior lightweight Tevin Farmer is ready for the biggest fights between the featherweight and lightweight divisions.

Farmer of Philadelphia has won 15 fights in a row and is now ranked number-five by the WBC at 130-pounds.

In his last bout, Farmer put on a masterful performance in a virtual shutout over highly regarded Ivan Redkach on July 30 in Brooklyn, New York. 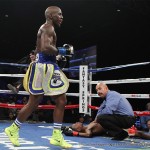 With the NABA Werlterweight Title on the line, both fighters fought fearlessly as a near sell-out rowdy crowd cheered them on. Mikhaylenko showed his strength early on in the fight and continued to corner Perez on the ropes as the fight progressed. Perez showed a lot of heart as continued to go forward in every round, but by the eighth round, the referee called off the fight as an overwhelmed Perez could no longer defend himself.

Indio, California (August 8, 2015)–Streaking Featherweight, Tevin “The American Idol” Farmer will be back in action TONIGHT!! when he takes on Daulis Prescott in a 10-round bout at the Fantasy Springs Casino. The bout is will part of an HBO Latino televised tripleheader.

Farmer of Philadelphia has been on quite a roll as he has won 12 consecutive fights that has raised his record 19-4-1.

As recently as 2012, Featherweight contender Tevin “The American Idol” Farmer was considered nothing more than a dangerous and useful journeyman. A fighter who would and could compete to a certain level but ultimately would fall a bit short against fighters with a perceived higher class.

New York, NY (10/8/14) – In 2012, Tevin Farmer was seen as nothing more than a tough Philly fighter, someone that promoters would put in as a B-side against one of their promising up-and-comers. Farmer was 7-4-1 and coming off a loss to highly regarded Olympian Jose Pedraza on ShoBox: The New Generation.

This Saturday night at the ABC Sports Complex in Springfield, Virginia, rising Featherweight Tevin “The American Idol” Farmer will look for his 10th consecutive victory when he takes on Dominick Coca (8-9, 2 KO’s) from Watts, California in an 8-round bout. 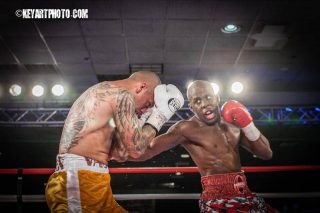 Farmer took the fight to Gonzalez from the opening bell and never let up as he outworked and out landed him throughout the bout.

Farmer worked the body extremely well, hit Gonzalez from several angles and moved well around the ring as he kept Gonzalez from using his power and from getting into any kind of rhythm. Gonzalez landed more often in the second half of the matchup and connected on several powerful combinations; however, Framer still beat him to the punch and landed the more effective shots.