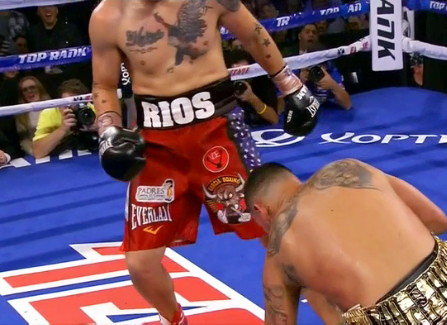 The definition of “bam” is (a word) used to imitate the sound of a hard blow. No need for special sound effects tonight in the ring at 1st Bank Center, Broomfield, CO. The stuff heard was no died in the wool imitation. It was the real article! Genuine, double-rectified bust head! (John Wayne, True Grit). Mike “Mile High” Alvarado looked like a bobble head doll. He let Rios get in close, and Bam Bam went to work. He literally hit him with every punch in the book, and Mike’s face took on a bruised and battered look before the end of the first round.

Alvarado’s corner scolded him for not moving and punching more. Everyone knew that’s why Mike was victorious in the second fight of this trilogy. However, even in that fight, it took him approximately half of the rounds before the light bulb came on. Once he started lateral movement, it opened up punching opportunities, and he was able to out throw and out land Rios. There was a lot less bam bam in the second half of that fight. 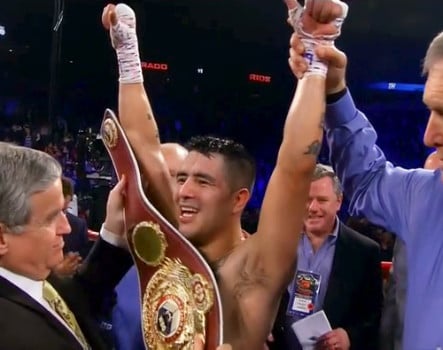 In what was supposed to be an exciting trilogy fight on HBO on Saturday night turned out to be a real stinker with #4 WBO welterweight contender Brandon Rios (33-2-1, 24 KOs) annihilating what appeared to be a poorly prepared Mike Alvarado (34-3, 23 KOs) in three rounds in front of his own fans at the 1st Bank Center, Broomfield, Colorado.

Alvarado decided he’d had enough after three rounds so he quit on his stool after the third, saying he couldn’t see out of his right eye. The crowd booed loudly at the stoppage, and continued to boo the 34-year-old Alvarado when he was being interviewed after the fight. 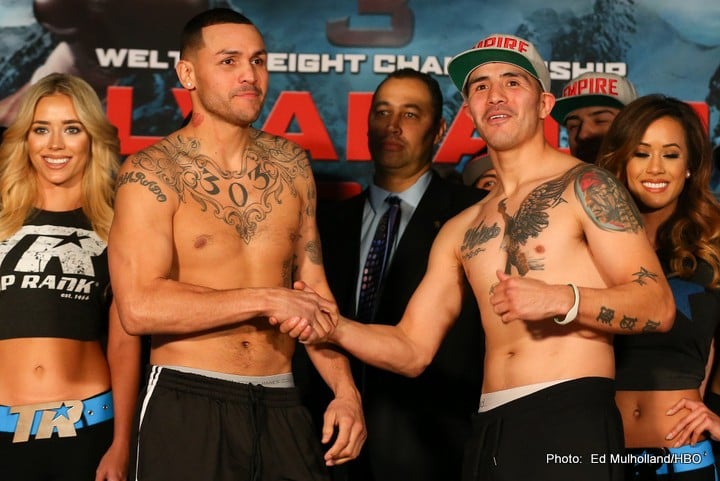 The rule of three is a principle utilised generally by writers and suggests that things that come in threes are inherently funnier, more satisfying, or more effective than other numbers of things.

The assertion being that the reader or audience of this form of text is more likely to consume information if it is written in groups of threes. We humans tend to agree as the rule of three has been applied across our lives in theatre, film and of course boxing in the form of the fabled and beloved trilogy.

A great trilogy see’s the perfect marriage of styles, personalities and backgrounds create an unbreakable bond between fighters that will define their careers and transcend the ages.

Photos by Tiffany Lam / ESB & Ed Mulholland/HBO: Everything went smoothly at today’s weigh in. There were no issues making weight, no trash talk, no shoving matches, it was all positive as the fighters hit the scales this afternoon in Denver, Colorado. The undercard fighters weighed in first, building up anticipation for when “Mile High” Mike Alvarado (34-3, 23KO) and Brandon “Bam Bam” Rios (32-2-1, 22KO) hit the stage.

Photos: Tiffany Lam – The much anticipated rubber match between Americans “Mile High” Mike Alvarado (34-3, 23KO) and Brandon “Bam Bam” Rios (33-2-1, 22KO) takes place this Saturday night in Alvarado’s hometown of Denver, Colorado. Both fighters have had a tough road since their second bout in early 2013 and find themselves in need of a big win. Alvarado took plenty of punishment in losses to the hard-hitting Ruslan Provodnikov and Mexican legend Juan Manuel Marquez. For Rios, there was the shutout decision loss to Manny Pacquiao, and then a tough disqualification victory over the dirty Argentinian Diego Chaves. This afternoon at the final press conference before Saturday night, the two proud warriors promised fireworks. 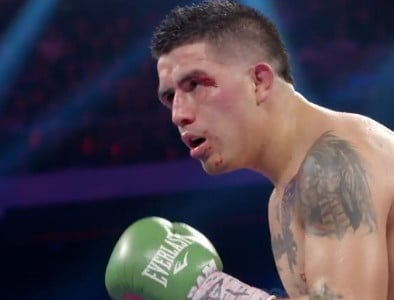 A third installment of the spirited ongoing battle between Mike Alvarado vs. Brandon Rios should be, barring a draw, decided this Saturday night on HBO. The fighter that has more left in the tank will prevail in this matchup of modern day warriors. The rubber match will take place in Denver, Colorado and Alvarado hopes this bout ends differently in front of his hometown faithful.
This pair of Mexican-American boxers more than lived up to their heritage’s long history of entertaining slugfests. In their first tilt Alvarado took the early lead only to succumb to Bam Bam’s pressure and power, losing by TKO in the 7th round.

In their second affair Alvarado looked sharp in the opening frame until a Rios jab shook up Mike in the 2nd round. At the end of that round Alvarado was cut above his right eye and seemed already shopworn at such an early stage of the fight. 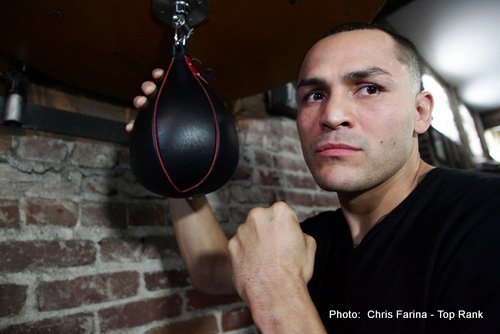 BOB ARUM: Thank you. Everyone is looking forward to what should be a great, great fight. The previous two fights were classics and this one will probably top them all. I am really looking forward to Saturday night in Denver and now I would like to put the fighters on. These are two gladiators. These are two guys that make the sport of boxing proud the way they perform in the ring.

BRANDON RIOS: How is it going everybody? I hope everyone had a good Christmas and a great New Years. We are ready for Saturday to give the fans a great show.

MIKE ALVARADO: Training is going good and I am ready to put on a great show. I am ready to start the year off right and put a great trilogy on for the fans. I am ready and excited for this fight. 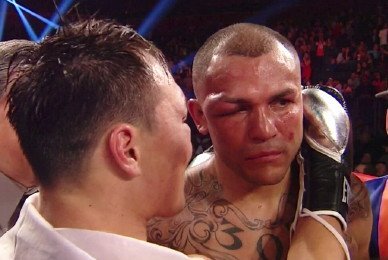 Alvarado won their most recent bout in March 2013 by unanimous decision. He threw a colossal 860 punches with 260 connecting. As of recent Alvarado’s focus remains questionable after a string of events unfolded. He was arrested on the 3rd January when a hand gun was found in the glove box of his hummer. With the distraction undoubtedly going to take its toll, there’s still the strong case that it could well spark the fuse to Alvarado, packing every punch that bit harder.