Bill Dwyre * — While most senators around the world, in every country where there is that kind of government, were home on their couches Saturday night, making sure to take their pain pills and Geritol, the Honorable Manny Pacquiao was beating up a guy in Las Vegas. 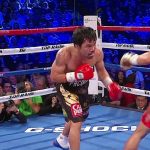 Superstar Manny Pacquiao was widely expected to defeat reigning and defending WBO welterweight champ Jessie Vargas in Las Vegas last night, the only real question going in was: would the returning 37 year-old be able to register a KO, his first since way back in 2009? Pac-Man got the win, via 12-round UD (with one judge somehow having it crazily close at 114-113, the other two officials on the ball at 118-109 each) but he failed to get the knockout. 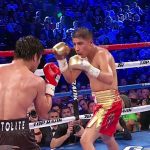 Making his comeback to the sport, Manny Pacquiao (59-6-2, 38 KOs) showed that he had too much speed and talent for WBO welterweight champion Jessie Vargas (27-2, 10 Kos), who he defeated tonight by a 12 round unanimous decision to win his WBO title in front of a large crowd at the Thomas & Mack Center in Las Vegas, Nevada. The fight was televised by Top Rank pay-per-view rather than HBO. 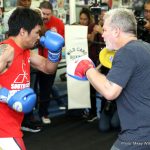 This Saturday night live from the Thomas and Mack Center in Las Vegas, Nevada, sure-fire hall of famer Manny Pacquiao will meet WBO champion Jessie Vargas. It’s a once in a lifetime shot for Vargas to become a star in a sport that has very few recognizable names. It’s a means to an end for Manny Pacquiao, who returns from a short-lived retirement. With news surfacing of Floyd Mayweather’s recent sparring session one can’t help but to assume this independent PPV hosted by Top Rank serves as a bridge to a Money Mayweather sequel.

By: Bill Dwyre * – It is Friday of fight week, and a female friend has it labeled perfectly: Boys in Underwear Day.

Weigh-in day for boxing matches represents the single most-consistent and predictable no-news day in sports journalism. The fighters know what they have to weigh, what the consequences are if they are too heavy — loss of a portion of their purse and sometimes, even a fight cancellation — and so the parade to the scale is about as dramatic as a soccer injury. Player falls, player grimaces and writhes in pain, stretcher carts player off, player returns to game in 30 seconds. 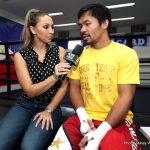 By: Bill Dwyre * – LAS VEGAS – The Honorable Emmanual Dapridan Pacquiao, freshman senator from the Philippines, pulled up a chair at the end of a long table here the other day and gave the gathered dozens a new look at the state of his union.

Gathered around were the least likely of the media set to deeply comprehend Filipino politics; actually, the least likely to comprehend any politics. We were the semi-couth of the journalism world, aka boxing writers. Our dress code is tennis shoes and, if handy, a clean shirt. 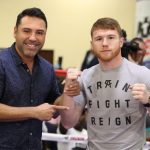 Reigning and defending WBO welterweight champ Jessie Vargas almost certainly does not like it one bit, but it does seem as though fight fans and members of the media are talking more about who returning superstar Manny Pacquiao may or may not face in his next fight after the Las Vegas clash with Vargas this coming Saturday night. There is interest in Pacquiao-Vargas but the fight does not have anything like the buzz previous Pacquiao fights had.

Boxing superstar Manny Pacquiao is out to prove he is still one of the very best around in his upcoming world title clash.

The Filipino fighter will be facing WBO welterweight world champion Jessie Vargas from the Thomas and Mack Center in Las Vegas, exclusively live on BoxNation this Saturday night. 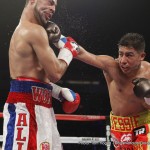 JESSIE VARGAS: My trainer Dewey Cooper and my strength and conditioning coach David Hayes, Rafael Garcia, my father – we make a great team and they brought out the best in me. They brought out the best in me in March against Sadam Ali and now we are going to outdo that performance in this fight on November 5th. I am very thankful for my manager Cameron Dunkin getting me this opportunity and I can’t wait to perform on the big stage and show what I’m about. 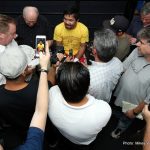 Pacquiao (58-6-2, 38 KOs), from General Santos City, Philippines, is in the final week of training for his world championship collision with World Boxing Organization (WBO) welterweight world champion JESSIE VARGAS (27-1, 10 KOs), of Las Vegas. In just nine days they will go mano a mano and toe-to-toe in a high-stakes welterweight showdown. While Pacquiao will be looking to become a three-time WBO welterweight champion as well as the first senator to win a world title, Vargas will be resolute in enforcing a term limit on the future Hall of Famer’s boxing career.