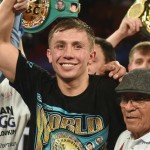 There seems to be a consistent struggle for big-hitting WBA middleweight champion Gennady Golovkin to find a suitable opponent, with him being linked to a number of names from Andre Ward and (previously) Carl Froch at 168, through now to newly crowned IBF middleweight champion David Lemieux, in what would be a true battle of the bangers should it take place.

After his exciting victory over Hassan N’Dam in Canada last month, Lemieux’s promoter Oscar De La Hoya had said his fighter would be looking to face his (unnamed) mandatory challenger next, although the Golden Boy has this week said to ESPN that provisional talks between the respective camps for a unification bout are now underway. 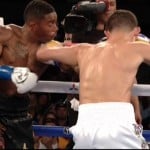 Following David Lemieux’s all-action win against Frenchman Hassan N’Dam at the weekend, which saw the French-Canadian capture the IBF 160 lb strap, Gennady Golovkin took to his twitter and issued an open challenge to both Lemieux and promoter Oscar De La Hoya, insisting now is the right time – not later – to make a fight between the two heavy-hitting middleweights.

Sadly for the fans it seemed an imminent clash was some way off as De La Hoya spoke out to insist that his fighter was due to fight a mandatory defence later this year that would keep the two punchers apart – at least until 2016. 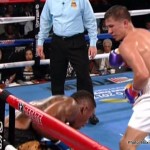 There has been some interesting talk from the much-avoided 160 lb fan favorite Gennady Golovkin this weekend regarding potential future fights, with the Kazakh knockout artist speaking out to British media and on twitter to talk Carl Froch and new IBF middleweight champion David Lemieux – who captured his strap in exciting but no means technically excellent manner on Saturday night against Frenchman Hassan N’Dam.

I have absolutely no confidence in Froch fighting on and the more time passes, the more that belief looks to be reality. However, he had expressed an interest in a Golovkin fight and for a man as avoided as the Kazakh star – all publicity is good publicity and he wants the world to know he is good on his side of the bargain and really will fight all comers. 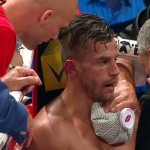 The big punching David Lemieux (34-2, 31 KOs) built up an early lead and held onto it in the second half of the fight to defeat #1 IBF Hassan N’Dam (31-2, 18 KOs) by a 12 round unanimous decision on Saturday night to win the International Boxing Federation 160 pound title at the Bell Centre in Montreal, Canada. Lemieux’s left hook was a big weapon for him in this fight, as he knocked N’Dam down with it on four occasions in the fight. 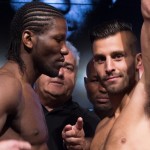 (Photo credit: Photo Credit: Eye of The Tiger Management) We are spoilt for choice as boxing fans this weekend as no fewer than three big clashes hit our screens. We of course have the PBC Broner v Porter card, as well as the “Son of God’s” return in Oakland when Andre Ward takes on Britain’s Paul Smith – who incidentally came in a whopping 4 lbs over the agreed 172 catch-weight.

However the one fight that has seemingly gone under the radar is the IBF 160 lb title fight between big -punching French-Canadian David Lemieux and France’s teak tough Hassan N’Dam. It is on Fox Sports 2 in the US and has thankfully been picked up by Boxnation in the UK.