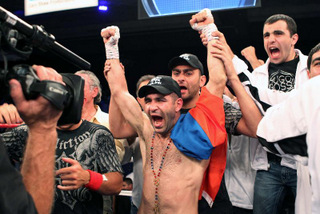 Hovhannisyan, making his first start in 11 months, was victorious in a hard-hitting, fast-paced scrap by the scores of 95-93 twice and 92-96. Each slugger went down one time, Acosta late in the opening round, Hovhannisyan in the fifth.

“Both (blow-by-blow announcer) Barry (Tompkins) and I said that this was the kind of fight that you could make a case for for either guy,” ShoBox expert analyst Steve Farhood said afterward. “It was a great, interesting fight.. It could have ended early (after Hovhannisyan dropped Acosta with a sweeping overhand right hand with approximately 10 seconds to go in the first round). If the knockdown had come earlier in the round it might have since Acosta seemed like he was saved by the bell.

“But, ultimately, he wasn’t saved by the judges.”

Hovhannisyan, 30, was a tad surprised at the scoring. “I knew it was a little close, but I definitely thought I won,” he said. “After I dropped him, I kept trying for the spectacular knockout. My corner was telling me between rounds to calm down, but I thought I had him for sure. He was lucky the bell rang when it did.

“I’m very happy to get the win. Acosta can still fight. I think my conditioning played a great role in my performance, but at this level you need to be good in all facets. This fight was definitely a great learning experience for me.”

The more experienced Acosta, 34, who moved well throughout and decked Hovhannisyan with an overhand right hand, thought he’d done enough to get his hand raised. “I was very sure I won,” he said. “Although he caught me in the first round I landed more punches throughout the fight. I knew my conditioning was good and it would carry me though the fight. I felt I was robbed.”

Among those rooting on Hovhannisyan was popular women’s Mixed Martial Arts superstar, Ronda Rousey, who trains at the same Glendale gym as the boxer and has the same trainer, Edmond Tarverdyan.

“Fighting is a lot less nerve wracking that just sitting and watching,” said Rousey, who was interviewed between fights and will be the subject of the latest “ALL ACCESS” on SHOWTIME before her next fight. “I’d much rather be the one in there. But I’m really happy for Art.”

Morales, 23, scored a knockdown in the third en route to winning by the scores of 80-71 twice and 79-72. Going eight rounds for the first time in a career that began in February 2011, the switch-hitting Morales showed excellent poise and composure in his ShoBox debut, and appears to be a prospect to watch.

“I thought this was a good performance,” he said. “I’m glad I could go eight hard rounds because that is what I expected. I got a little tired but I knew I had to keep working. I’ll be back in the gym soon and I’ll be ready to fight whoever my team wants me to.”

The Roger Mayweather-trained Santiago, 21, offered no excuses. “I thought it was a close fight, a tough fight. I got dropped but it was just a flash knockdown. I was never hurt. I felt good the whole time.”

(6-round middleweight bout) Tureano Johnson (10-0, 7 KOs) vs. Arturo Rodriguez (12-12, 8 KOs) – Outworking Rodriguez with pressure and hard shots to the body and head, Tureano Johnson dropped Arturo with a nice uppercut ending the bout at the 1:49 mark of round one. Johnson remains undefeated.

(8-round lightweight bout) Jonathan Maicelo (17-0, 10 KOs) vs. Daniel Attah (26-12-1, 9 KOs) – From the opening bell, Maicelo pressed the fight landing power shots to Attah in the first and second rounds. After taking more punishment in the third, Maicelo dropped Attah in the early part of the round with a straight right to head. Attah got up only to take more of a beating as Maicelo ended the bout with a right hook, left hook combo earning a TKO victory. The fight was stopped at the 2:45 mark, and Maicelo is still unbeaten.

(4-round middleweight bout) Edgar Alvarado (0-1-1) vs. Erick Prado (0-2-1) – In an all out war of winless fighters, Prado and Alvardo left everything in the ring. From the opening round it was non-stop action. Prada landed the cleaner shots in the early rounds, but Alvarado ended strong landing nice power shots of his own. Alvarado needed to win the last round and he closed impressively. After the final round, the score cards read 40-36 for Alvardo, 39-37 for Prado, and 38-38 making it draw. Both fighters remain winless.

(6-round featherweight bout) Rufino Serrano (13-4, 0 KOs) vs. Rob Diezel (8-5, 3 KOs) – In the first ever fight for the Central Coast title, Serrano and Diezel boxed for six rounds. Diezel started off fast but slowed down toward the end. In the third round Diezel suffered a cut under his left eye by an accidental head butt. Serrano was busier and landed the cleaner punches in the later rounds. Serrano wins by unanimous decision. The scorecards read 59-55 across the board.

The Gary Shaw Productions doubleheader will re-air this week as follows:

Friday’s fights will be available ON DEMAND beginning Sunday, July 21.

Tompkinscalled the action from ringside alongside Farhood. The executive producer of ShoBox is Gordon Hall with Richard Gaughan producing and Rick Phillips directing.

For information on SHOWTIME Sports, including exclusive behind-the-scenes video and photo galleries, complete telecast information and more, visit the website at http://sports.SHO.com.

Next post: Broner-Escobedo fight is on! It’s all good!