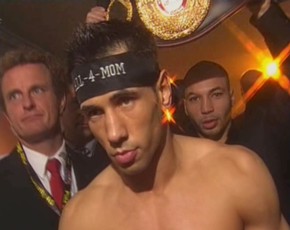 Said Promoter Gary Shaw, “This event is what boxing is all about. When you get two world champions agreeing to fight each other with no hesitation, you know the fans are going to be witnessing an unbelievable bout. Both guys are hungry to keep their titles and they’re going to leave everything in the ring. Words can’t describe how excited I am about this event. Geale and Sturm are true warriors who are going to “Bring It” come fight night. It’s going to be an incredible night of boxing. The true winners will be the fans..

“In Daniel’s last fight a new Australian superstar emerged,” Shaw continued. “Daniel’s superiority is confirmation that he is on the verge of pound-for-pound status. With the expert guidance of Garrie Fransisco and Bill Treacy managing Daniel’s career, along with Graham Shaw steering his corner, Geale has the right team to take him to middleweight supremacy. It’s an honor to be promoting such a great fighter with a great team.”

After a dominating performance against mandatory challenger, Osumanu Adama (20-3, 15 KOs), Geale will look to extend on a six-fight winning streak. He has fought all but one of his bouts in his native Australia. In his lone start outside his homeland, Geale traveled to Germany and captured the IBF middleweight title against Sebastian Sylvester (34-5-1, 16 KOs). Geale wants to make a statement in this bout as he fights in Germany for a second time.

“I’m truly thankful to be fighting in this unification bout with Felix Sturm,” Geale said. “My promoter Gary Shaw has promised me the biggest fights and he’s kept his word. Fighting in Germany is a very difficult task, but I was successful there once before when I captured my first world title against Sebastian Sylvester. My goal will be to beat Sturm in his homeland, and bring his title back to Australia once again. I’m fighting for my country and all the kids I train at the Grange Old School Boxing gym.

“I also want to thank my managers Garrie Fransisco and Billy Treacy who, in conjunction with my trainer Graham Shaw, have all worked hard to get me to the top. Right now I’m in the best shape of my life and Graham has seen the improvements in my ability to make adjustments in the ring. I’m fully prepared to give the fans an exciting fight when I step in the ring with Sturm.”

Sturm, who is coming off an impressive ninth-round knockout victory against then-once- beaten challenger Sebastian Zbik (30-2, 10 KOs), is undefeated in his last 14 bouts. He’s best known in America for his fight with Oscar De La Hoya, in which many fans believe he won clearly, but instead lost on a close unanimous decision. With 14 title defenses, Sturm is considered one of the best pure boxers in the sport, and will seek to add another world title belt to his collection.

“Fighting in my native land of Germany is incredible and I can’t wait to show the German fans, once again, what I’m made of,” stated Sturm. “Daniel Geale is a worthy opponent, but he’s never been in the ring with a fighter like me. I fight for the people of Germany and I’m not going to let them down! I will be victorious on Sept. 1.”