Sergio Martinez: “My ultimate goal is to become pound-for-pound the best fighter in the world today” 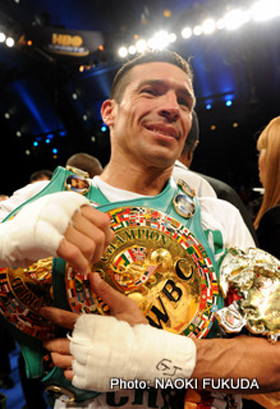 by Geoffrey Ciani – This week’s 101st edition of On the Ropes Boxing Radio featured an exclusive interview with WBC middleweight champion Sergio Martinez (46-2-2, 25 KOs) who is coming off an impressive second round knockout victory against Paul Williams (39-2, 27 KOs). This reverses the result of their previous encounter which was awarded to Williams in a very competitive majority decision. Martinez talked about his victory and also discussed his future, including possible fights on the horizon against Manny Pacquiao or Floyd Mayweather Junior. Here is a complete transcript of that interview.

JENNA J: Hey everybody. Welcome to the 101st edition of ‘On the Ropes Boxing Radio’ show. As always, I’m the Hostess Jenna J and we’re joined by a very special guest to open up this week’s show. He is coming off an impressive win this past weekend. We have the The Ring magazine middleweight champion of the world Sergio Martinez on with us now. Hey Sergio, are you ready?

JENNA: Great, Sergio we got to talk about your win this past weekend against Paul ‘The Punisher’ Williams. You shocked a lot of boxing fans and you also shocked Paul. What do you think of your performance?

JENNA: Now Sergio, were you at all surprised at the way Williams fought that fight? He seemed to be go for more of a crowding style than he did in the first fight?

JENNA: Let’s talk about that punch, that left hand. On all of the replays it appears you’re completely looking the other way. What did it feel like when you landed the punch?

MARTINEZ: That punch there was actually something we were training for at the gym. It was a punch that I hit him with twice already in the first round and I knew it was only a matter of time for me to connect that solid punch. But that was a trained punch and that lateral movement that I did was on purpose.

JENNA: Now this fight was fought at a catch weight of 158 pounds. How did you feel making the weight?

MARTINEZ: I felt perfect with this weight. I never had a weight problem, and just for all the people that were talking about my weight, saying I was blowing up to 200 pounds, and this and that, you know the proof is in the pudding. I felt great at that weight. I never have a problem with my weight.

JENNA: Alright now let’s talk about your future, Sergio. This win here, it really opened up the eyes of a lot of boxing fans. It’s been played all over Sports Center this knockout. What’s next for you?

JENNA: A couple of weeks ago we had Freddie Roach on our show, and we brought up what would be next for Pacquiao after Margarito. He said, “If Mayweather doesn’t come to the table, the winner of Martinez-Williams might be next for him”. How much would you like to fight Manny Pacquiao?

JENNA: Now this question is actually for Cecilio. Being that you’re Sergio’s strength and conditioning coach, how low in weight do you think he can go while remaining effective?

CECILIO FLORES: Well you know, Sergio can fight at 154 and also at middleweight at 160. I think with Gabriel Sarmiento his trainer and myself and the whole team, we can basically bring him down without hurting his speed and his strength and whatnot. Two days before the fight, he was at 156 pounds. He was eating three times a day and he had a lot of energy so I don’t see a problem for Sergio.

JENNA: Sergio, Manny Pacquiao was recently reported in the press as saying that he would consider fighting you, but only at 160 pounds. What is the lowest that you’re willing to go to fight him?

MARTINEZ: It’s a very logical answer for Manny Pacquiao to say that. Yes, he is the smaller guy and I understand that, but I really don’t have an answer for that. But we can definitely negotiate the correct weight.

GEOFFREY CIANI: Hello Sergio. It’s a pleasure to have you back on the show and I wanted to congratulate you for your sensational knockout victory.

MARTINEZ: Thank you very much. It’s my pleasure to be on your show again.

CIANI: Thank you, Sergio. Now I know before this fight with Williams that you were having trouble landing an opponent, and after the nature of your victory this weekend, I think you’re going to have an even harder time because I don’t think guys like Pacquiao or Mayweather are going to want to fight you. I’m wondering, if the right opportunity arose would you be willing to move to 168 if the best opportunities were there?

MARTINEZ: You know, I definitely won’t cross it off. There might be a possible chance that, yes I could fight at that weight. No, definitely. I’ll just wait and see what will be the best opponent for me.

MARTINEZ: You know I would like to see what is going to be the outcome with Mayweather and Pacquiao, and then a lot of the big fights would happen for me at there from 154 to 160. The best fighter at 168 is Lucian Bute and I’m going to wait and see.

CIANI: What does it feel like, Sergio, that you were on the short end of a couple of decisions against Cintron in a fight that everybody thought you won, and even the first fight with Williams. How does it feel to finally be getting this type of recognition where you’re now on top of the world in the middleweight division?

CIANI: Do you think we’ve seen the best of you yet, or is the best still yet to come?

MARTINEZ: I’m just barely getting started and I’m going to continue to get better. You’re just going to see a better Sergio Martinez next time around.

JENNA: Alright guys, we just have a couple of more questions before we let you both off the line. Sergio, with you getting this win over Paul Williams and your win earlier in the year against Kelly Pavlik, there is a lot of talk about you being Fighter of the Year. How much would it mean to you to get that recognition?

MARTINEZ: This would probably be one of the most beautiful things that ever happened to me in my career. If I’m able to win that, that would be just a great thing for my team and for myself, and it would just prove all my hard work that I did throughout my career.

JENNA: If you’re unable to get a Pacquiao or a Mayweather in the ring, would you next look to unification in the 160 pound division?

MARTINEZ: That’s always been one of my dreams to unify the titles at 154 or 160, but you know it’s going to be very difficult to get those champions to try and fight me.

JENNA: What about Dmirty Pirog? He has the belt you were unceremoniously stripped of, he is the WBO champion.

MARTINEZ: Yes, absolutely. It would be a great option in my career.

JENNA: Alright, now when you look forward and you look towards 2011, what is your ultimate goal?

JENNA: Great. One final question Sergio, is there anything you want to say to all your fans out there?

MARTINEZ: First of all I would like to thank all my fans who came out to the fight, all my fans that saw the fight, and all the fans that support me. Thank you very much. I send you guys a big hug, and also what you see out there is what you get. That’s Sergio Martinez. I’m a professional inside and outside the ring, and I’m going to continue that, and I’m going to bring the sport to the next level. I thank you very much for this report and this interview.

JENNA: Alright, well it’s definitely been our pleasure, Sergio. We wish all you the best of luck in the future and we look forward to seeing you get back out there.

MARTINEZ: Thank you so much, and anytime you’d like, I would like to be on your show again.

For those interested in listening to the Sergio Martinez interview in its entirety, it begins right at the start of the program.

Previous post: Larry Merchant: He is so good you start to wonder whats wrong with him…

Boxing News → Sergio Martinez: “My ultimate goal is to become pound-for-pound the best fighter in the world today”