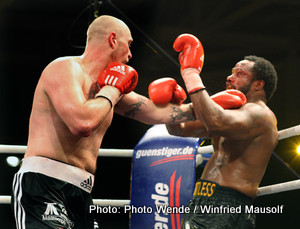 Scandinavian heavyweight sensation Robert Helenius (11-0, 7 KOs) continued his raise to international stardom with an eighth-round TKO victory over former WBO Champion Lamon Brewster (35-6, 30 KOs). The “Nordic Nightmare” knocked down his opponent in the second round following a huge right to the chin. He kept up pressure in the following as he cleverly wore down the American, who was dangerous throughout but could land only few punches. “My coach told me to throw left-right combinations,” Helenius said. “That´s what I did and Brewster was on the floor in the second. I felt really comfortable throughout but Brewster was dangerous because he has so much power.”

Helenius took Brewster apart in the eighth when a huge left-right series sent him into the corner. Further strong punches to body and head then caused the referee to call the one-sided contest off. “Robert has a golden future ahead,” coach Ulli Wegner said. “This was just his 11th fight as a professional and to beat a world-class guy like Brewster at this early stage of his career certainly tells the world of boxing something about his class. I am very proud of him.”

Added sports director Hagen Doering: “This was a great victory for Robert, who has now beaten the likes of Brewster, Bidenko and Gammer in just nine months. He learns very fast and is developing very quickly. I already spoke to coach Ulli Wegner and we look forward to fighting in Finland again soon..”

Also on the undercard, Karo Murat (21-0, 12 KOs) made a successful first defence of his WBO Intercontinental Light Heavyweight Title when he stopped Sean Corbin (13-2, 9 KOs) in the second round. Murat dusted his opponent with two strong hooks. When Corbin was under pressure again following a heavy combination, the referee stopped the fight. “I am very pleased,” Murat said. “I have adjusted well to the new weight class. I don´t have to lose that much weight anymore, which makes my punches much more powerful. Corbin was a tough guy but I am happy I could finish him off so quickly.”

In the main event Sebastian Sylvester (33-3, 16 KOs) made a successful first defence of his IBF Middleweight Title as he stopped Billy Lyell in the tenth round in Neubrandenburg, Germany. When the brave challenger was on the receiving end of another hard series of punches, coach Jack Loew threw the towel. “It was great to defend my title in front of my fantastic fans,” Sylvester said. “I am not 100 percent pleased with my performance – I think I can do better – but I have retained my title and that is all that matters. Lyell was very active and hard to hit but I am glad I wore him down.”

Much to the delight of the sell-out crowd of 4,500 fans, who had made it to arena despite heavy snow storms, Sylvester was on the front foot from the first second on. His defence gave the mobile challenger only few chances to connect, while Sylvester fired in his jab and also left-right combinations that rocked Lyell (21-8, 4 KOs). “I fought my heart out but I take my hat off to Sylvester,” Lyell said. “He is very strong. I tried to slow him down but I could not do it. His power made the difference tonight. His right kept hitting me on the same spot all the time. He deserved to win.”

Sylvester changed his tactics in the fifth and sixth round when he tried to counter punch before raising pressure in the later rounds. He was supported ferociously by his home fans. “I tried to put on a good performance for them. All my colleagues had won by KO so I wanted to do the same. I should have boxed a little more and not tried to force it,” he stated. Added coach Karsten Rower. “I am pleased with Sebastian´s performance. He had only very little time to prepare for Lyell and he did well to defend his title.” Spaniard Pablo Navascues was replaced late last week after testing positive for a banned substance during a random training test. Chris Meyer, General Manager of Team Sauerland, said that Sylvester will fight again soon. “He has to make his mandatory defence. We will try to stage the fight in North Germany where the Hurricane has a gigantic fan base. We should know more in the next weeks.”

Famous coach Jack Loew, who also trains Kelly Pavlik, congratulated Sylvester on a strong performance. “Billy gave his best, but Sylvester simply was too strong. He had too much power, so congratulations to him.” Asked about a fight between WBA Middleweight Champion Felix Sturm and Sylvester, Loew said: “That would be a good fight and I think Sylvester would beat Sturm.”