Bernard Hopkins – Enrique Ornelas on VERSUS on Wednesday 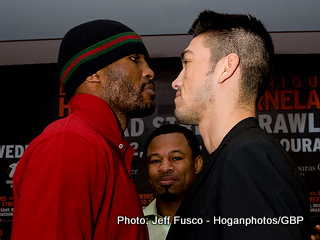 NEW YORK, N.Y. (December 1, 2009) – VERSUS, the fastest growing sports cable network in the country, gives sports fans an action-packed night of programming on Wednesday, December 2, beginning at 8 p.m. ET, with a live boxing event and the premiere of the new original series Sports Jobs with Junior Seau at 10 p.m. ET.

Immediately following the live fight action VERSUS will debut its new original series, Sports Jobs with Junior Seau, with two back-to-back episodes. The new weekly half-hour series features NFL legend and All-Pro linebacker for the New England Patriots as he tries out the sometimes thankless, but extremely important, jobs across the entire sports world.. In the first episode of the night, Seau will be working as part of the construction crew helping to build the new Meadowlands stadium which will be used by both the New York Giants and New York Jets. In the night’s second episode, Seau will wear Dodger blue and serve as the batboy/equipment manager during a Los Angeles Dodgers home stand against the Milwaukee Brewers.

VERSUS celebrates real competition across all platforms (VERSUS.com, VERSUS on Demand and VERSUS HD) and is the national cable home of the National Hockey League (NHL), the Stanley Cup Playoffs and the IZOD IndyCar® Series as well as best-in-class events such as The Tour de France, the Professional Bull Riders (PBR), World Extreme Cagefighting (WEC) and Professional Boxing. The network also offers collegiate sports featuring nationally-ranked teams from top conferences such as the Pac-10, Big 12, Mountain West and Ivy League. VERSUS features the best field sports programming on television and is a destination for sports fans, athletes and sportsmen to find exclusive, competitive events and original programs, such as Sports Soup and Sports Jobs with Junior Seau that audiences can’t find elsewhere. VERSUS, a wholly owned company of Comcast Corporation (NASDAQ: CMCSA, CMCSK), is distributed via cable systems and satellite operators throughout the United

Previous post: Will Enzo Maccarinelli Get Himself A Comeback Win, Or Will Krisztian Jaksi End The Welshman’s Career?

Boxing News → Bernard Hopkins – Enrique Ornelas on VERSUS on Wednesday