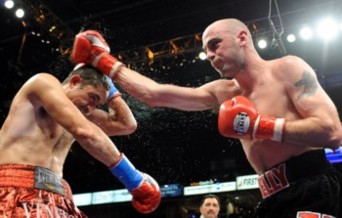 Below are quotes from today’s Pavlik vs. Williams press conference at the New York Giants team facility. Giants running back Brandon Jacobs presented Pavlik & Williams with team jerseys. Mauro from “Carlo’s Bakery,” the No. 1 food show on cable TV, delivered a cake celebrating Pavlik’s 2-year anniversary of winning the Middleweight championship (September 29, 2007, KO Taylor). Numerous other Giants players stopped by to watch the festivities and quarterback Eli Manning poked his head in the door on his way for some treatment on the team’s off day. Bob papa, the radio play-by-play voice of the New York Giants and blow-by-blow announcer on HBO’s Boxing After Dark opened the press conference. The release follows the quotes.

I have been waiting a long time for this fight and the time in between fights is not a problem. Eight weeks is more than enough time for me to train. I think this is a big match-up for middleweights. There are not too many big fights out there right now. A lot of guys are moving out of the weight class and the big fight right now is Paul Williams. He came off a big win against Winky Wright and it’s what everybody wants to see right now. I know I want this fight and I am always looking for the best opponent out there. Paul throws a lot of punches, wears fighters down and comes form all angles. My style is the same exact thing. If you’ve seen the fights with Taylor and the fight with Miranda, I put the gear on and it’s time for war. I train for every fight whether the guy is 0-100 or 100-0. I train for twelve-rounds even though I have a high knockout ratio, I have four fights that went the distance. And those four fights I had to be in tip-top shape because I throw a lot of punches every round also. Paul is a great conditioned fighter and I’ll need to wear him down and I’ll need to break him down. I know that makes for a great match-up and I will come away with a “W.” I never predict – there are no rounds to pick – our plan is to go in there, look at the films, get the right sparring partners and be dominant and make another mark in history. I compare this fight to the Miranda fight. Miranda was on top of his game that that fight set up my fight with Taylor. I need to beat Williams at this time, when he is on top of his game to set up bigger fights. December 5 is going to be a great night for boxing and you’ve got two guys that aren’t holding back.

This will be a fight where the last man standing wins, I am not anticipating a decision. He’s never been hit by a natural middleweight. How he will stand up to that in the later rounds is the question. He looks like a middleweight by his height and his frame.

What I took from the Hopkins loss is how to bounce back from my first loss as a professional. That night was so frustrating for me. I have a lot to prove still, I am hungry and I want to go down in history as one of the best middleweights of all time.

It’s great to be back in the ring. One thing I can assure Team Williams is that we are not leaving Youngstown. There will be no excuses – it’s tough to make excuses when you are winning the fight. “The Punisher” will be the punished. There will be no reasons for excuses. I hear him going back to 147-pounds and I don’t want excuses out of them when we win the fight that they should go back to 147. They agreed to 260 and we’ll see how they live up to it after the fight. I expect nothing but the best from Paul Williams, he is always in fantastic shape. He always comes prepared and we are going to be prepared for twelve-rounds of fighting. I wish him nothing but the best and as he said the best man is going to win the night and obviously I believe it is going to be my man. It’s great to finally get back into the ring and back into training and get the show on the road.

Combined, these two sluggers boast an incredible record of 72-2 (58 KOs), a winning percentage of 98% and a victory by knockout ratio of 80%!

“My world title reign has been no different than my world title climb. I keep fighting the best men out there,” said Pavlik. “My two title defenses have been against the No. 1 contenders. Now I’m getting the fight I have wanted most of all, against Paul Williams.

“I’m not content being the World Middleweight Champion, I want to be the best man in the game, pound for pound. Defeating Williams will go a long way to making my case I will be 200% for this fight because that’s what it will take to win.”

“I’m not looking down on Pavlik. This fight will be fought eye-to-eye,” said Williams. “It’s a fight that’s overdue. The public has wanted to see this from the moment that they heard talk of it. Even before Pavlik-Hopkins. I haven’t been able to receive the props that I deserve at this point in my career as an athlete. I have not been able to get the quality of fight that I wanted and I appreciate that Pavlik has stepped up. I believe that upon defeating Pavlik, I will get the accolades that are due.”

“Kelly Pavlik is a superstar because he has always accepted the biggest challenges,” said Todd duBoef, president of Top Rank. “Now Kelly faces the toughest test of his middleweight title reign in fellow world champion Paul Williams, who proved he was the goods when he manhandled Winky Wright in his last fight. This isn’t just the class of the division facing off. It’s the class of boxing.”

“From 147 to 168 pounds, there is no one better than Paul Williams,” said Dan Goossen, president of Goossen Tutor Promotions. “That is why he is known as “the most feared fighter in boxing.” This fight will cement Paul’s standing as the best middleweight in the world.”

“Kelly Pavlik and Paul Williams have established their credentials as elite fighters and with their respective styles, boxing fans everywhere are in for a very early holiday gift,” said HBO Sports senior vice president Kery Davis. “These are battle-tested American middleweights who are sure to produce a memorable night of action under the bright lights.”

“Caesars is very excited to welcome world champion Kelly Pavlik and his huge contingent of Youngstown, Ohio fans back to Atlantic City,” said Harrah’s Entertainment Sports & Entertainment Consultant Ken Condon. “We are looking forward to what is sure to be another fabulous night of championship boxing at Boardwalk Hall with these two exciting world champions.”

Pavlik (35-1, 31 KOs), the star from Youngstown, Ohio, joins former lightweight champions Harry Arroyo and Ray “Boom Boom” Mancini as hometown world champions. Pavlik Ghost wrote a career year in 2007 against three of the best who boasted a combined record of 74-4-3 (55 KOs) when he faced them. The consensus “Fighter of the Year” for 2007, Pavlik knocked out Jose Luis Zertuche (19-3-2, 14 KOs) and Edison Miranda (28-1, 24 KOs), in world title elimination bouts, earning him the right to become Jermain Taylor’s mandatory challenger. His year-end finale, a seventh-round stoppage of the previously undefeated Taylor, to claim the world middleweight championship, was selected as the “Fight of the Year” by the Boxing Writers Association of America and extended Pavlik’s two-year victory by knockout streak to nine bouts. Pavlik defeated Taylor handily in their rematch in February 2008 to solidify his claim as one of boxing’s top pound for pound fighters. He has successfully defended the title twice, both by knockout, against Gary Lockett and Marco Antonio Rubio, the No. 1 contenders and mandatory challengers for the World Boxing Organization (WBO) and the World Boxing Council (WBC), respectively.

Williams (37-1, 27 KOs), from Atlanta, Georgia, boasts a 73% victory by knockout ratio and five victories over world champions, two good reasons why he is known as boxing’s “Most Feared Fighter.” The tall southpaw with the endless reserve of power and energy has twice captured the WBO welterweight title with a unanimous decision over Antonio Margarito in 2007 and a first-round TKO of Quintano in 2008, avenging the only loss on his professional resume. Unable to get fellow welterweight champions to fight him in title unification bouts, Williams moved up to the junior middleweight division and closed out 2008 by knocking out three-time junior middleweight champion Verno Phillips in the eighth round to capture the WBO interim junior middleweight title, which he still holds. Williams returns to the ring after one of his most impressive victories, a thorough blitzkrieg of two-time junior middleweight champion Winky Wright last April. It was a complete beatdown. Williams kept an extremely fast pace from the first bell through the last, consistently landing the harder punches to produce a near shutout on scorecards — 120-108, 119-109 and 119-109. If three world titles weren’t enough, the victory over master technician Wright served notice to the boxing world that Williams should be feared.