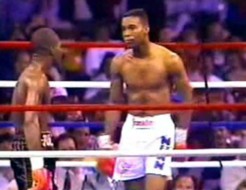 by James Slater – Talk about an overall waste of talent.

Michael “Second To” Nunn, who captured the IBF middleweight title by stopping former Olympic gold medallist Frank Tate exactly twenty-one years ago today, was once a fighter who seemingly had it all. The Davenport, Iowa southpaw was a tall, athletic, naturally gifted and hardworking boxer; one who was being referred to at the time of his 9th-round stoppage of Tate as a future great. Back in the late-1980s it was rumoured how even the legendary “Sugar” Ray Leonard was reluctant to face the peaking star.

But Nunn, who turned pro in December of 1984 and who would eventually be trained by Leonard’s former trainer, the great Angelo Dundee (having acrimoniously split from Joe Goossen in ’91) , never lived up to his promise; despite capturing an eventual total of two world titles at different weights and challenging for a third..

An unbeaten sensation, really, when he sparkled against the likewise undefeated Tate in Las Vegas, Nunn soon began to reportedly hang around with “the wrong people.” Sure, Nunn, aged 26 and at his peak, looked awesome in starching the talented and usually durable Sumbu Kalambay in just one-round in his second title defence, but things began to slowly trickle downhill for him after the win over the Italian.

Safety-first points wins over Iran Barkley and the naturally smaller Marlon Starling left fans feeling bored and disappointed, and a May, 1991 TKO loss to new bad boy James Toney ended Nunn’s reign in what was a real upset at the time (Nunn being stopped in the 11th-round).

It was around this time that Nunn allegedly began to get into drugs; Cocaine being the substance he is said to have begun taking and was later caught distributing. It was kept under wraps at the time, and Nunn even had success up at super-middleweight, when he beat Panama’s Victor Cordoba to annex the WBA 168-pound strap – a title Nunn retained four times. But the superstar Nunn was expected to become in 1988 never appeared. And now he never would.

A weight-drained Nunn was caught up with by the late Steve Little, a big underdog going in, in London in early 1994. Out-pointed, Nunn’s belt was gone, and with it all remnants of his hopes of regaining his earlier prestige. Two more title challenges did appear for Nunn – one at 168 against Frankie Liles (LU 12), the other up at light-heavyweight against Graciano Rocchigiani (LS12) – but his status now was a far cry from the one he held when legends Leonard, Tommy Hearns and Roberto Duran were his potential foes.
@
Carrying on when much past his best, Nunn last fought in 2002. Then the curtain was unceremoniously dropped for good on his once ultra-promising career. Caught dealing Cocaine and sentenced in January of 2004, Nunn, then aged 40, was sentenced to twenty-four years in prison. It was a tragic end to a once glittering career.

Today, according to a recent article that appeared in the DesMoines Register, Nunn is content whilst languishing in jail, saying he feels this way because he was a two-time world champion and he knows “you can’t ever take that from me.” But can Nunn really be “the happiest man in the world” he claims to be?

His reputation in pieces even before the judge passed sentence and his career with it, things had all gone sour for a basically okay guy. Nunn is right to feel proud of his title wins, and twenty-one years ago today, against Tate, the lanky southpaw sure did shine.

But Nunn never ended up where he was supposed to end up. For today he should be enshrined in The Hall of Fame in Canastota, not imprisoned in Sandstone prison in Minneapolis.