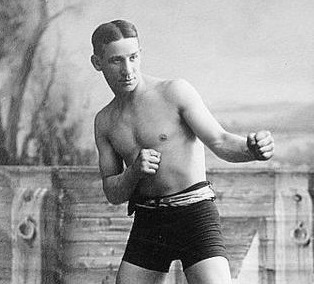 By “Old Yank” Schneider – It was nearing the turn of the century – the 19th century – and he was scheduled for a 25 round bout for the World Middleweight Championship at Coney Island, Brooklyn, NY. At 5’ 7 ½” he was a full one and a half inches taller than the average man of his day in the USA. His name was Tommy Ryan and borne on his shoulders were the hopes and dreams of every man between the weight of 148 and 160 pounds. Although he had been a remarkable welterweight, he had grown and developed into the quintessential middleweight of his day. And middleweight more than any other division represented the aspirations of the average man.

At the turn of the century the average height of an American male was 5’ 6”. And when a frame of this size was packed into a lean muscle mass of 160 pounds, these “average” size men were not lanky spindles – they were human pit-bulls.. They were the most fit representatives of the “fat” in the normal bell curve of the American male population. As a result, more American men dreamed or fantasized of being a middleweight champion than any other weight division.

The “average” man of the day would have to much dignity to see himself as the bully of smaller weight divisions and was generally too small to fantasize about becoming the heavyweight champion of the world.

And so it is that history has come to see the middleweight division as the division of the “average man”. And from the greatest slice of the population were drawn its ranks.

Since 1900 we have been treated to some spectacular “average” men. Included among them are Willie Lewis and Jack Dillon, Stanley Ketchel and Mike Gibbons. Names like Mike O’Dowd and Harry Greb jump out at us; as do names like Bobo Olson and Gene Fullmer. And how does one not mention Sugar Ray Robinson and Dick Tiger and Joey Giardello and follow those names up with Carlos Monzon and Marvelous Marvin Hagler?

Something very interesting has happened though to what the “average man” looks like in the industrial world. There has been a shift in the “fat” of the normal bell curve in the height and weight distribution that represents “average”. Tommy Ryan was slightly taller than average in 1900, but his stature of 5’ 7 ½” is nothing short of, well…short in 2009. Now 5’ 10 ½” is the new 5’ 6” as far as “average” is concerned.

So as I turn to the names that we either now see in the super-middleweight division or those we expect to “grow” into it, it is no surprise that as fans we are excited about what we see. These men represent the stature of what the “average” male in an industrial society might aspire to look like.

Mikkel Kessler, Lucian Bute, Carl Froch, Andre Ward, Andre Dirrell, Librato Andrade, Authur Abraham, Kelly Pavlik, Paul Williams – these are the names of the new middleweight division; “new” in the sense that it is updated to represent the average male among us. And I think it is SUPER!

Tommy Ryan would win a TKO victory over Frank Craig in this his last bout of the 19th century at Coney Island in Brooklyn, NY. Ryan would end up dropping the 5’ 10” Craig 9 times in the 9th round. Perhaps this gives us even a greater lesson in the history of the sport and the importance or unimportance of size in any division.