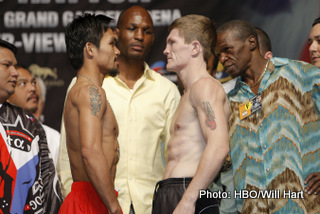 02.05.09 – By Vivek Wallace: Well, ladies and gents…Brash Brits and fanatical Filipino’s….The day of reckoning is upon us, and in only a few hours, this years most highly anticipated showdown will commence. It’s been a while since this fight was first announced, and suddenly, we find ourselves only moments away. The most tone-setting and appropriate statement to be made came from a fight fan seen standing on the Las Vegas strip yesterday when asked about tonight’s showdown. His response: “I haven’t been this eager to hear a bell to ring since my last day of high school, 19 years ago”! There have been some great matches in recent times, but in comparison to the Mayweather/De la Hoya showdown, or the Mayweather/Hatton debacle, this showdown will actually feature two fighters who come forward with no intent to step back. The styles of Manny Pacquiao and Ricky Hatton don’t allow nerves to set in, as once the bell begins, the fight actually starts! As we prepare to see these two men entertain us in this epic showdown, we hone in on the two gladiators to analyze what they need to do individually to get the job done:

For Manny Pacquiao, contrary to popular belief, this fight will land him in unchartered waters, so despite his blazing handspeed, defense may very well be what the doctor ordered for him tonight – literally. For Pacquiao, a victory may all come down to ‘backwards driving’. Pacquiao has had a reputation in the past of going back in a straight line, typically until he touches the ropes. That tendency could mark the beginning of the end against a ‘bulldog’ like Hatton who will undoubtedly try to keep him there. Pacquiao will need to use angles as he steps backwards to become a tougher target to hit. Using angles to escape will be VERY critical for Pacquiao because if Hatton begins to throw a barrage of blows, Pacquiao’s face covering posture with his short arms leave quite a bit of rib to nibble at for a hungry jack like Hatton who can clean the plate if he gets to eat. Defensive exit angles will keep him fresh and less battered. Offensively, Pacquiao will need to use his handspeed and patented fury to keep Hatton off balance and concerned. If Pacquiao can use those exit angles and strategically mount his offensive attacks, it’ll be an easy night for him with an inevitable win.

For Ricky Hatton, the plot thickens, in the sense that he has more to contend with due to Pacquiao’s potent offense. Of all the things that Hatton must bring to the table, a quick start, rough in nature, and very smart will be the perfect tone-setter for him. Hatton needs to come out early while he has a full tank of gas and let Pacquiao know that, yes, there is a difference between his body shots and one from David Diaz; or yes, there is a difference between his aggression and that of an energy depleted Oscar De La Hoya. They say you never get a second chance to make a first impression, and for Hatton, his first chance to make that first impression may be his only chance at winning the fight. He will have to take the Hopkins blueprint used against Kelly Pavlik, neutralizing his opponents power by keeping him on his back foot, all night long. Power and speed can both be neutralized when a fighter is stepping backwards, and if the past is any indication, Pacquiao doesn’t do it too well. Another key thing for Hatton will be to use head movement when attacking. Pacquiao’s handspeed is fast enough to catch a still target, but if Hatton makes him miss, he has the brute strength to subsequently make him pay. In a nutshell, Hatton will need to keep pressing the action and touching Pacquiao. Be it on the arm, the shoulder, the elbow, whatever; he just needs to keep touching Pacquiao and wearing him down, reminding him that facing a true jr. welterweight is a far cry from a super featherweight or a featherweight. An application of this gameplan could easily give Hatton a win.

OPPOSITES ATTACK: Morales, Barrera, and Marquez each had longer arms than Hatton so they needed more space to operate. Hatton – on the other hand – is shorter with more compact shots, so this serves as one more reason to press the action and stay in the face of Manny. He needs to do this, but will he?

REDUCED WRAPS, INCREASED MARGARITO: Hatton would be better served spending less time grappling, and more time banging away at the body, ala Margarito. Cotto was a great fighter who could be hurt but no one was ever strong enough to close him out until Margarito came along. Same rules apply here. Hatton has the tools to hurt Pacquiao, but if he does, will he pull the curtains and close the show in the same fashion, or hold up out of fear of desperate retaliation?

BAY-LESS WATCH: Kenny Bayless, (one of the best referees in the game), got the nod as the third man in the ring. Joe ‘firm-but-fair’ Cortez was widely criticized for not allowing Hatton to fight his fight against Mayweather. Bayless will be far less involved from that standpoint. Will Hatton’s new found freedom to bully his opponent around wear down the smaller Pacquiao?

This fight is as neutral as they come, yet so very complicated to breakdown. Pacquiao is fast, Hatton is far from slow. Pacquiao is powerful, Hatton, probably more so. Pacquiao is relentless, Hatton is as well. The flipside is that Pacquiao presses the action, but rarely has he been faced with someone who presses harder. Hatton has power, but never has he met someone whose power rivals his own. Mayweather knocked Hatton out by taking an angled side-step and landing a flush check hook; Does Pacquiao possess that type of footwork in unison with his offense? When you look at all the perspectives involved, it seems like the only thing that will separate these two guys completely in the end will come down to who will actually break down (or be broken down) and end up taking steps backwards. The strength of both men is compleltely neutralized the moment they find themselves stepping back. That assessment tells me this is Margarito/Cotto waiting to happen all over again. Styles make fights. Pacquiao is the better pure boxer who likes to press, yet here he finds himself against a guy who does is just as hard, only this one – like Margarito – has the ability to actually close the show when he hurts him. Pacquiao is brilliant, as was Cotto, but pressure burst pipes. Many have asked what is the prediction of my son who is currently 7-1 in the past 8 mega fights. Oddly enough, despite his brilliant string of victories, I have to look the other way and abandon the smaller guy…both literally and figuratively.

Oscar De La Hoya: “There will be a chess match going on mentally and physically between both camps but, with all due respect to Freddie Roach’s training ability and his team, Mayweather is the better trainer. I was extremely surprised how Ricky handled Paulie Malignaggi [in November] last year, but that’s what Mayweather does for you.”

“Iron” Mike Tyson: “With Manny, it’s something like I used to be. Hatton is good, but he’s not elusive enough to handle Pacquiao’s punches in bunches. I like Manny Pacquiao to win”.

David Haye: “I see Hatton winning a very close, hard-fought decision. He may have to get off the floor but he will find a way to win.”

Joe Calzaghe: “”It’s going to be a tough fight for Ricky but he’s got a better chance of beating Manny than Floyd Mayweather Jr (who beat Hatton in 2007)”.

Ryan Songalia: “Pacquiao by KO. Hatton still is a fast starter that slows down in the mid-rounds. If he slows down he’s dead meat”

Great Trainer, Mexican Nacho Beristain: “Manny Pacquiao…He is much faster and his left hand is lethal.”

Jr. Mddlwt. Rashad Holloway: “As far as strength, Manny has the best legs in the business. He’s powerful. the key for him to win will be lateral movement, stopping at the drop of a dime and landing powershots. On the other hand, if Ricky can stay in his face and keep Manny off balance he can pull off an upset. Both men have a chance, but I like Manny in 8rds”!