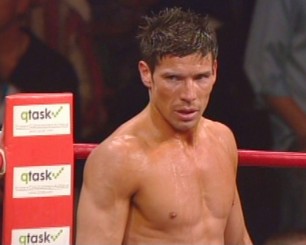 February 15th 2009 – By Frank Gonzalez Jr. How do you outbox your opponent all night, score a knockdown, where your opponent got to continue after being counted out and then with nary a mark on your face after 12 rounds, have the fight ruled a Majority Draw? This wasn’t in Montreal and the referee wasn’t Marlon B. Wright.

I scored this fight 118-110 in favor of Martinez, who scored a knockdown in the seventh and easily won a wide majority of the rounds in a fight where Cintron gave a new meaning to the term, ‘the art of fighting without fighting.’

This Cintron Martinez fight started out with an overly cautious first round that featured a lot of nothing, which pissed off the fans in the stands, who booed frequently at the lack of action. After seeing an all out action fight between Alfredo Angulo and Cosme Rivera, that ended in a TKO 5 win for Angulo, the Cintron vs. Martinez fight felt like a very long intermission.

In this fight, Cintron lacked an effective offense. His footwork was terrible and he never cut off the ring to force exchanges with Martinez, who danced all around him, making him look like a statue with a pulse for nine of 12 rounds. I had to wonder how it was that his corner didn’t instruct him to cut off the ring.

In the seventh round, during an exchange at center ring, Martinez landed a sharp left followed by a sneaky right that staggered Cintron into the ropes. With no interference from the ref, Martinez jumped all over Cintron, who was going down anyway from the two shots that staggered him. Cintron didn’t seem to beat the count, where he was almost up at the count of ten. The ref appeared to have counted Cintron out but Cintron protested that he was head-butted, but the ref, Frank Santore Jr., answered that he didn’t see any head butt.

Martinez was already celebrating his victory when suddenly, the fight was still on. The referee had waved the fight off after Cintron appeared to not beat the count but was coaxed into allowing it to continue. I haven’t seen that before.

Martinez beamed with confidence as he continued into the eighth round and toyed with Cintron, dropping his guard and taunting Cintron to do something, anything. We were all waiting…

I had Cintron winning (maybe) three out of 12 rounds in a fight so bad I could have mistaken it for an under-card on a Pay-Per-View event. Cintron fights with the dexterity of a stone and frankly, if he doesn’t remake himself into a boxer with a more crowd pleasing style, this fight against Martinez may mark the end Cintron’s marketability—which seems to be the ONLY thing that matters in today’s version of what was once the greatest sport on Earth.

After 12 rounds were in the books, the official Judges cards resulted in a Majority Draw with scores of 116-110 for Martinez and 113-113 twice by the other two incompetent Judges who should lose whatever license they have to ever officiate in a boxing match again.

It’s stuff like THIS that turns casual boxing fans into non boxing fans. Its bad enough this was a fairly low quality fight, they had to rob the winner too? What are the promoters waiting for to fix this image problem that boxing is totally corrupt? How does any sport allow incompetent officials to steal victory from the winner in order to save the loser? It begs a lot of ugly questions.

Martinez is charismatic (marketable) and has a fan friendly, energetic style. Only last year, he was still fighting four-rounders. His win over Alex Bunema last October made him look great—but mostly because Bunema isn’t very good anymore. Martinez has good reflexes and likes to showoff a bit. It will be interesting to see what he does if he ever faces any of the top guys in the division. Outside of Paul Williams (36-1, 26 KO’s) and Sergiy Dzinziruk (36-0, 22 KO’s), Martinez probably would give Daniel Santos and Vernon Forrest a good run for the money but I suspect Alfredo Angulo would knock him out cold. Time will tell.

Comments can be sent to dshark87@hotmail.com